Airwolf (also nicknamed "The Lady" by Stringfellow Hawke and Dominic Santini), is a highly advanced attack helicopter, designed and created by Charles Henry Moffett in 1984.

Moffett stole Airwolf and took it to Libya, where for a time, he worked for a military group bent on causing terror and chaos throughout the region. Eventually Hawke and Santini managed to steal back Airwolf and somewhat laid waste to the military compound where it was being held. When they regained possession of it, Hawke used it to kill Moffett, though mere moments before, the Libyans thought they had destroyed Airwolf with a powerful surface-to-air missile, which, through Hawke's skills as a pilot, detonated on a large sand dune that Airwolf had passed moments before. In the time it was in Moffett's possession, he used it to destroy a French Mirage, and a United States destroyer off the Libyan coastline, as well as its test facility in the California desert.[1]

Another member of the Airwolf development team developed an Airwolf simulator to enable other pilots to be trained to operate Airwolf. [2]

Some time after it's retrival, Airwolf came under the influence of a 'Programme Bomb' which Moffett had secretly added to the operational software in Airwolf, and which manifested itself after a set period without receiving a cancellation code from Moffett. [3] 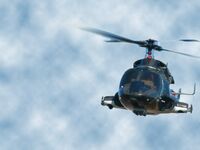 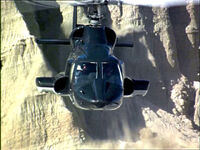 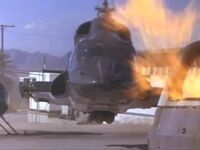 Not my work, but a superb sketch of the Lady with brilliant detail. Found via Google Images. 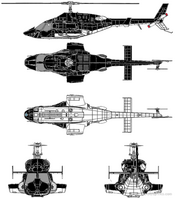