And They Are Us (episode)

And They Are Us

Stringfellow Hawke, Dominic Santini and Airwolf become involved in a potentially dangerous political situation between two African countries. The major instigator is Hawke's former commanding officer in Vietnam, Colonel Martin Vidor, now known as Bo-Dai-Thung. Now a mercenary copter pilot working with the Soviet trained South, Vidor plans to use his small group and sophisticated weapons against the North and its president, Seko Logana--unless Hawke and Dominic can intervne and upset his plans. However, he might also know the location of Hawke's brother, Saint John.[1][2] 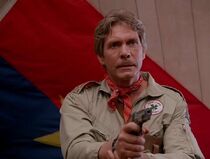 Christopher Stone as Colonel Vidor. The flag behind him is a Viet Cong flag. 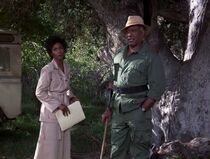 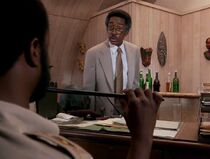 President Harold Ngomo (Milton Murill) of South Limbawe. He is not pleased to learn that his General Butami is planning to attack the north. 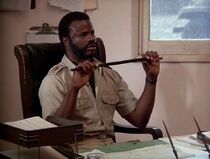 But the Soviet-trained General Ali Butami (Grand Bush) basically puts the president under arrest and later wants to execute him. 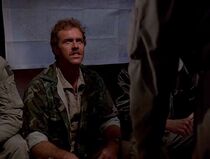 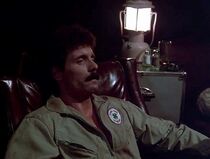 There is a Bruce Cervi billed as "chopper pilot". This could be him as he has a few lines. Vidor calls him Delaney. 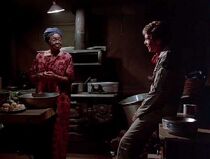 Betty Cole as "mamma",Vidor's mess cook. He confides in her when he needs a moment's peace. 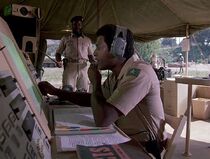 Lee Payne as the radar operator of the South Limbawe missile base. 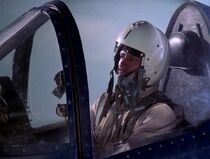 This North Limbawean Corsair pilot has a few lines but doesn't seem to pick up a credit. 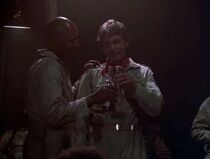 Here is the Corsair pilot again. Colonel Vidor hosts him as his guest after shooting him down because he admires his courage. 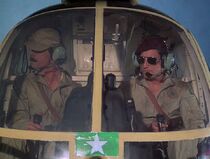 The pilot on the left is Delaney. Vidor calls the one on the right Steadman. He is not credited. 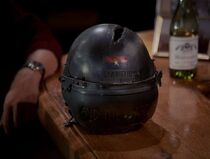 The helmet of Bo Dai Thung, the North Vietnamese ace whom Vidor shot down. On the visor are the words "And they are us".