This episode is notable for its setting at Silver City.

The entire F.I.R.M. crew appear. Hawke, Dominic and Caitlin all have substantial parts in the plot. Lydia makes her second appearance as Archangel's aide. Not much for her to say but a fair bit of foreground screen time.

After a group of bandits hijack the "Mongoose", a powerful miniature laser being developed by the F.I.R.M., one of the gang, Slade, thinks he has a raw deal and offers to tell everything for a million dollars. The F.I.R.M. agrees but Slade wants to make contact during a stuntman tryout at a Western film set called Old Silver City. And as Archangel tells Hawke, "You are stunt people...." [1]

Karl Stern and his gang hijack a F.I.R.M. convoy and steal a high powered miniature laser known as the Mongoose. One of the gang, Dennis Slade, picks up a F.I.R.M. ID at the scene and realizes the heist is bigger than he was led to believe. At a demonstration of the weapon for arms dealer Leo Martin, Slade overhears Leo and Stern discussing a price of $10 million for some communist customers. Slade wants a bigger share of the deal than his $100 thousand but Stern tells him to enjoy his money "in good health".

Archangel catches Hawke in his cabin just as he is about to leave for a vacation with his latest girl, a flight stewardess named Kiki Tanabi. Archangel tells Hawke that Slade has offered to point out the leader of the gang if he is paid a million dollars. The F.I.R.M. agrees but Slade wants to make contact at the stuntman tryouts at a touring Wild West Show to be held at Old Silver City. Hawke, Dominic and Caitlin work with stuntpeople all the time so they will blend in.

Hawke, Dominic and Caitlin sign on for the tryouts and make contact with Slade but he is found murdered before he can say anything. Archangel wants Hawke to stay around see if they can pick up any other leads.

The Wild West show is being run by "Annie Oakley", a sharpshooter whose real name is Louise Mackie. Hawke catches her son Rex taking chewing tobacco and brings him to his mother. She is grateful Hawke was looking out for him and they get acquainted. She tells him he is lined up for a trial with a Gatling gun the next day.

At the Gatling gun tryout, one of the rounds explode, bursting the barrel. Larson, the propmaster says he needs to take the gun away for repairs. Meantime, Karl Stern shows up. It turns out he is Louise's ex-husband. Hawke sends Caitlin to eavesdrop on them while he meets Lydia to collect some specs about the Mongoose. Meanwhile Dominic follows Larson as he drives the Gatling to the gunshop.

Stern wants to enter a partnership with the Wild West show. He has connections and wants to bring the show to Europe, with shows in Frankfurt, Munich and East Berlin. As enticement, he offers to drop the custody battle over Rex.

Caitlin overhears all this and brings the news to Hawke. He has been comparing a drawing of a Mongoose. Superimposing a transparency of a Gatling gun over it, he notices how it is just big enough to hide the laser inside. What better way to get a weapon across borders than be disguising it as a show prop.

Larson manages to throw off Dominic's tail by shooting out his tire and sending his car plunging into a ravine. The vehicle explodes Dominic is unhurt and is picked up by Hawke and Caitlin. Hawke sends Dominic to fetch Airwolf.

Hawke tells Louise what has been happening but at first she can't believe Karl can be a murderer or a traitor. But then she overhears Stern and his gang discussing their escape to the Mexican border and she runs to tell Hawke that it is all true. Hawke and Caitlin decides to stop the gang. Louise joins them but she and Hawke ends up being disarmed by Stern's men. Stern and Larson take off in a truck for the border with Louise as a hostage.

Meanwhile, Hawke and Caitlin overcome and capture the guards Stern left behind. Hawke speeds off in a motorbike in pursuit while Caitlin relays the news to Dominic in Airwolf.

Stern shoots the Mongoose at Hawke and at Airwolf and manages to score a hit on the helicopter, causing minor damage. Hawke manages to climb onto the truck and scuffle with Stern but gets thrown off when Larson brakes. Meanwhile Louise breaks free from Larson and jumps off the truck. Dominic lands and picks them up and Airwolf continues the pursuit.

Stern continues to engage Airwolf with the laser but they are getting too close to the border so Hawke has to blow the truck up with a couple of Copperhead missiles.

Archangel arrives at Old Silver City and Hawke tells him the Mongoose lies in a thousand pieces near the Mexican border. But Archangel has news for Hawke too. Kiki has left him a note to be delivered to Hawke. It says simply "Aloha". But Hawke is puzzled. Does it mean hello or goodbye? 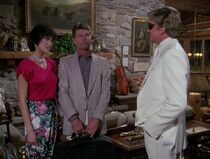 Tia Carrere in one of her first TV roles as Kiki. Hawke is not pleased to be interrupted by Archangel. 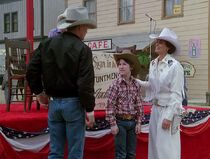 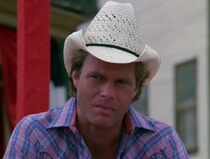 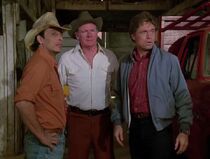 Karl Stern (right) with his gang. Larson on the left and Valentine in the middle. 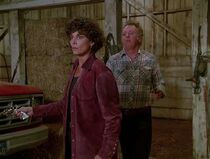 Tony Epper as Burke, another member of Stern's gang, here, about to disarm Louise. 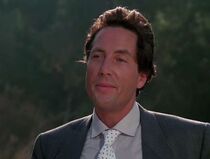 Leo Martin, the arms dealer who thinks he can sell the Mongoose weapon for Stern. 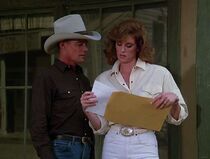 The second appearance of Lydia, another one of Archangel's aides. She is here dressed more casually than the other aides. 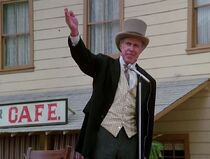 This announcer has a lot of lines. Since the other guest stars are accounted for, this is probably Barker, played by Ryan Macdonald. 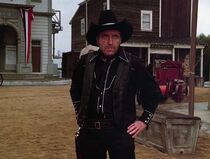 The villain as played by Len Lesser. 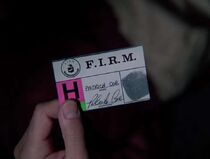 Slade examines a FIRM pass from a guard on the convoy he has just attacked. The name says Patrick Coe. 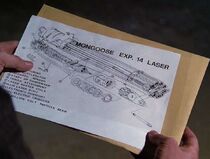 Hawke notices that the Mongoose fits right inside a Gatling gun.