Bite of The Jackal

Bite of the Jackal was the 3rd episode of Season One and first aired on 2/4/84. Marella does not appear in this episode--instead, Archangel gets another aide named Laura.

In a first for the series, Archangel gets to fly in Airwolf as WSO.

Dominic flies an antique Sikorsky S-55 to Acapulco. Unfortunately, the helicopter has been sabotaged by Mitchell Bruck, an ambitious FIRM executive hoping to edge out Archangel. He hopes to use Dominic as bait to capture Airwolf. Fortunately for Dominic there's a young stowaway Phoebe Danner to give him a hand.[1][2]

Night time, and we see a mechanic plant some kind of timer bomb in the nose of a Sikorsky S-55.

In the Santini Air hangar, Dominic tries to persuade Hawke to come with him on his ferry flight. He has to deliver the old S-55 to a customer in Acapulco. Hawke declines the invitation.

In Archangel's limo, Michael Bruck, Archangel's executive office, receives a phone call telling him "the bird is on its way. It's set for a tailspin". After Bruck hangs up, he tells his boss its some administrative details for a project.

Archangel drops Bruck off at the airport for his trip to Mexico. After he has gone, Laura plays back a recording of Bruck's call. It doesn't sound like clerical details. Laura traces the call to a payphone at Van Nuys. Archangel is sure it has something to do with Stringfellow Hawke. Archangel must move fast.

Meanwhile, Dominic's flight is going smoothly when a young girl climbs into the cockpit pops a young girl, Phoebe Danner. She explains that she decided to hitch a ride when she heard he was going to Acapulco. She had been fostered out when very young after her mother died. Now she's trying to find her father who is a sailor. Partway through their talk, the bomb goes off. Dominic has to make autorotate and force land. They end up on the edge of a cliff and have to crawl carefully out.

Archangel plays Hawke the recording of Bruck. Both realize that Bruck is using Dominic as bait for Airwolf. Getting his hands on Airwolf would be a significant career coup for Bruck, allowing him to replace Archangel or go even further.

Nonetheless Hawke decides to go after Dominic and invites Archangel to go along as WSO. Hawke refuses to let Laura go along--he's got painful memories of Gabrielle.

In Mexico, Bruck confers with his co-conspirator, Colonel Arias of the Mexican Air Force. The Colonel will make the required cursory search. Meanwhile he warns Bruck to get his men ready to move in when Hawke arrives.

Phoebe is helping Dominic repair the S-55 when they spot a few Hughes 500 gunships arriving. But they are not here to rescue them. They set up a perimeter and on the loudspeaker Bruck warns Dominic and Phoebe to stay inside.

Airwolf turns up, and the Hughes zpring the trap. On the ground, a soldier fires a Stinger and hits Airwolf's tail rotor. Hawke instructs Archangel to disengage the tail rotor and fire the turbos. It's crazy but it works and they escape.

Bruck doesn't pursue. Hawke will be back. Then he will use his secret "Leech" missile. It will hit the target but instead of exploding, will release a sloow acting nerve agent, giving Hawke three minutes to make a forced landing.

Hawke and Archangel land near a farmstead. They befriend the farmers who help them with the repairs.

The farmers do more than that--they also plant dynamite around the area. These explode and create a diversion which lure Bruck's Hughes gunships away. Right on cue, Airwolf turns up and shoots up the ground troops surrounding Dominic.

Bruck's Hughes turn back and fire their Leech missiles. The decoys take out most of them but one lodges in Airwolf. But Archangel manages to push it out with his walking stick. It doesn't take long after that for Airwolf to blow the Hughes out of the sky.

Meanwhile Dominic and Phoebe have got the S-55 going and it lifts off. The two helicopters fly home.

Where is Herb Armstrong, credited as "Soldier Callan"? 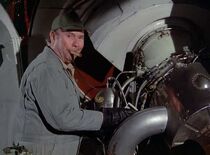 This mechanic plants a bomb in Dominic's S-55. He is not credited. 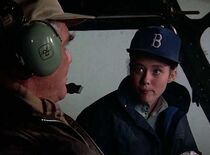 Phoebe has stowed away on the S-55. Also helped herself to Dominic's samdwiches. 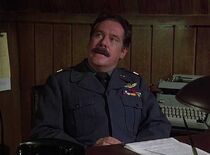 Colonel Arias, in cahoots with Mitchell Bruck for the capture of Airwolf. 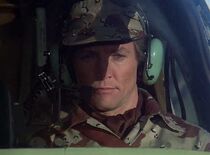 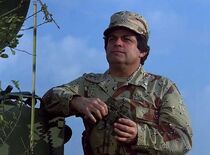 The credits list him as Betz but Bruck calls him Richards. He mans the ground radar for Bruck. 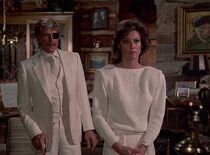 Laura wants to go along in the rescue but Hawke refuses. He doesn't want another Gabrielle. 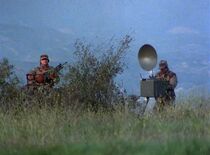 Soldiers surrounding Dominic's crash site. One of them looks like he is carrying a WA2000 sniper rifle? 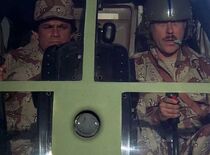 The pilot on the right had a speaking part but is not credited. 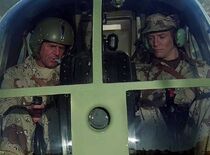 The pilot on the left, next to Bruck also has a speaking part but is not credited. 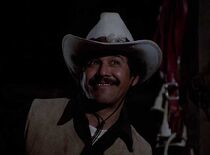 Joachim Santos. He likes Hawke's sense of humour so agrees to help. 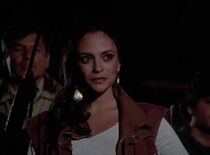 Joachim's sister Miriam. Joachim hopes for a match with Hawke, but there's not much bandwidth to develop this angle. 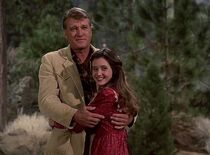 Phoebe reunited with her father. The father is not credited.
Add a photo to this gallery

Retrieved from "https://airwolf.fandom.com/wiki/Bite_of_The_Jackal_(episode)?oldid=9601"
Community content is available under CC-BY-SA unless otherwise noted.