The Truth About Holly (episode)

Did he finally use the footage of Caitlin's flight?

Carlson is a character who makes a one-time appearance in the Season 2 episode titled The Truth About Holly (episode).

David Ruprecht's character is not named in the credits but Hawke addresses him during the episode as "Mr. Carlson". Carlson is directing a film in which Santini Air is providing the helicopter stunt flying. He tells them he has problems. He is over budget and over schedule so he tells them he really needs them to complete the stunt flying scene in one take. Dominic has just hired Caitlin and this will be her first gig. It involves her playing a pilot who flies in to rescue her war correspondent boyfriend when she gets hit by gunfire, spins around wildly a bit and then land behind a building with a special effects explosion.

Carlson first gets Caitlin and Hawke (doubling for the boyfriend) to kiss and then sends her up for the stunt flying scene. However, the controls in Caitlin's helicopter have been sabotaged and the cyclic is jammed. The aircraft really starts to spin around wildly, barely under control. Dominic and Hawke sense there is trouble and calls to Caitlin to pull out, but Carlson gets excited by the stunt. He snatches the radio and yells for more.

Caitlin finally puts the chopper down on a neighboring film set, scattering the film crew over there. Dominic, Hawke and Carlson rush over. Caitlin is upset because she thinks she has messed up and Dominic doesn't believe her controls had jammed. But Carlson is delighted. He tells Caitlin that's the greatest stunt he has ever seen and he got it all on film. Dominic asks, "Are you sure you wouldn't like another take?" 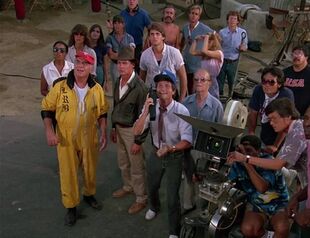 Carlson (center) with his film crew watching Caitlin's stunt. Caitlin is actually in trouble but he thinks the scene is great. 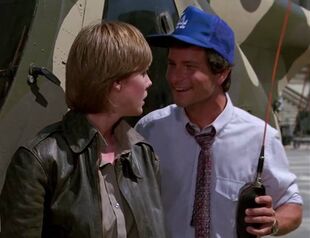 Carlson congratulating an upset Caitlin for giving him the best stunt flying he has ever seen.

Carlson is played by David Ruprecht[1]