Once a Hero (episode)

Charmaine Beaucaire is a character who makes a one-time appearance as a friend of Hawke's and later a member of his rescue team in the Season 2 episode titled "Once a Hero".

Not much information is given in the episode about Charmaine's background or why she is brought into the mission. She obviously knew Hawke from times past although at the time of the mission, they had not seen each other for a long time. There are some suggestions that they had been close but this is not developed during the show--there was probably no time for it.

Charmaine speaks with a French accent and has a French name. When Hawke introduces her as "Chin Mau" to his friends, they are surprised. Perhaps they were expecting to meet a local woman. But Charmaine does speak the local languages. So it is possible that she is a French woman who married a Thai or a Laotian. Later, during the encounter with the Thai customs official, Charmaine tells him the crates contain agricultural equipment for her "chateau in the country"--this might have been true. She would obviously have used an explanation which would have survived some checking. As Laos and Vietnam were French colonies, there were French planters who remained behind after independence and continued their occupations in places such as Thailand.

Hawke explains that he needs her as an expert guide for his mission and her mastery of the local languages certainly proved helpful when the team was captured by bandits. Charmaine is also an experienced and capable fighter as seen by her performance during their escape from the bandits, the raid into the prison camp, and the egress in a captured truck where she goes with Kearns and Wallace. After the raid, she is not with them at the funeral of Wallace, which suggests that she remained behind and returned to whatever she was doing in Thailand. 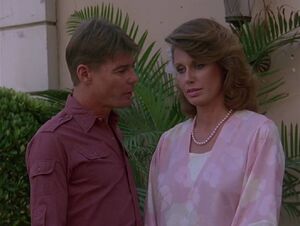 Hawke introduces Charmaine to his friends also mentioning that she is "Chin Mau". 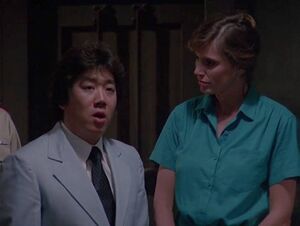 Charmaine attempts to fob off the customs official who is suspicious about all their crates of equipment. 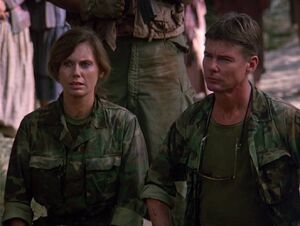 Charmaine with Hawke. They have been captured by bandits and are negotiating with the Bandit King. 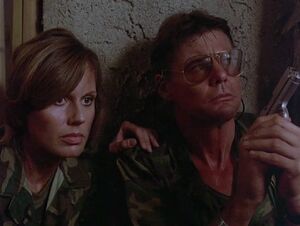 Charmaine with Hawke during the raid. She tells Hawke she has spotted guards loading up prisoners into a truck.