Condemned was the 23rd episode of Airwolf and the 12th episode of Season 2. The episode first aired on 1/5/1985. Caitlin has a large role in this episode but Dominic does not appear at all. Archangel delivers the mission briefing at the beginning but Marella, who usually supplies details on these occasions, is not present.

Hawke and Caitlin travel to remote island to find out what happened to a biological warfare research station there and to try to retrieve a vital antidote to a viral agent which the Russians have unleashed and has gone out of control in Afghanistan. They are forced into an uneasy alliance with a team from a Russian submarine which needs the antidote as much as they do.[1]

Firearms and other weapons seen 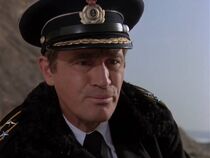 Leonid Zhukov. His rank is not mentioned in the dialogue. The crew address him as commander but he is wearing the insignia of a Captain 1st Rank. 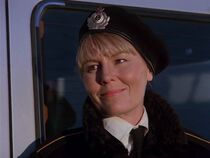 Elena Loupani, political officer of the submarine. Zhukov introduces her as a Lieutenant but she is not wearing any rank insignia. 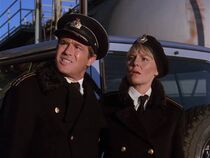 Zhukov with Loupani. In real life, Jan Triska and Karla Triska are husband and wife. 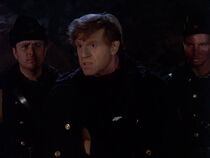 Hank Garrett as Dr. Morton, the only survivor of the research station. 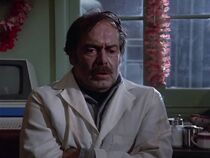 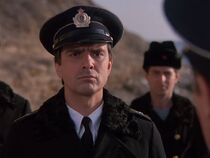 George C. Grant as Torgovitch. He is wearing the insignia of a Junior Lieutenant. 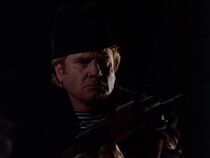 Presumably this is Gene Scherer. He plays "Sailor 2" but is listed before "Sailor 1" played by John Lander. This is probably because Scherer is the more experienced actor--he does have many more credits than Lander. 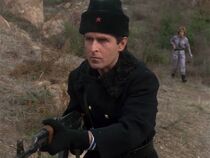 This leaves John Lander as "Sailor 1". He has fewer lines and a less demanding part. Caitlin is approaching from the back to knock him out.