Hawke is sent by land to escort to defecting father and daughter team of Czech scientists to the United States. The father is killed by KGB pursuers but Hawke and the daughter Inge make it to safety. But then Inge changes her mind! She decides to stay with an old family friend instead but he is not what he seems to be. Inge ends up in the hands of the KGB again and Hawke has to rescue her a second time.[1] 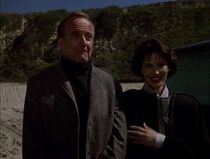 Defecting Czech scientist Victor Janek, played by John van Deelen. His sense of humor and love of life appeals to Hawke but he is killed early on. 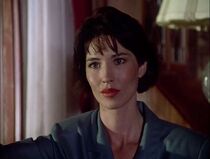 Inge, daughter of Victor, played by Isa Andersen. She doesn't think her new life, working for people like Huffman, would be very different from the life she just escaped from. 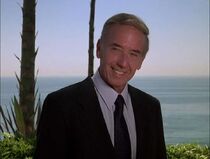 Shrankov as played by Albert Paulsen. He is the KGB agent assigned to recapture the Janeks. 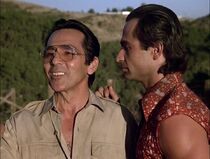 Perry Lopez plays Garcia (left, with glasses). Some kind of local "fixer" for Shrankov. With him is probably Robert Covarrubia who is billed as "Latino Soldier". He was the one who killed Victor Janek from a helicopter. 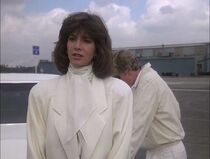 Well known Virginia Slims model Dani Minnick plays Marlene, another of Archangel's aides. She gets front billing and a lot more lines than other aides so far. 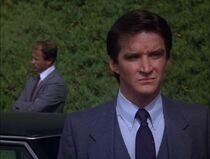 John O'Connell as Huffman. He botches the mission by poor planning and is only saved by Hawke's initiative. He find's Hawke's performance "acceptable". 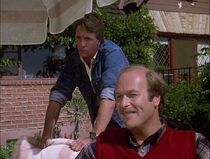 Garrett Colson (seated) as played by Arthur Rosenberg. Inge says she trusts him with her life. Unfortunately he is KGB, and quite senior at that. With him here is an uncredited henchman whom he calls "Dennis". 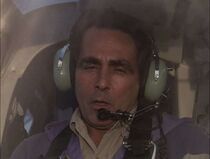 This chopper pilot flies with Shrankov. He gets a lot of lines. He is not named but could be Jones. 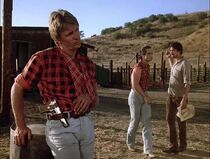 This gunman in the foreground with the red checked shirt gets a lot of action and a line or two but is uncredited, or he could be Jones.