Cullen Dixon is a character who makes a one-time appearance in the Season 3 episode titled "Day of Jeopardy".

Cullen Dixon was reputed as one of the richest men in America. But obviously his wealth was not enough. In the episode he was the leader of a conspiracy to assassinate world leaders and then take control of world currencies. He was ruthlessly dedicated to this ambition was seen in the way he calmly executed two guards who had allowed his wife Tess Dixon to escape from the yacht. He did however genuinely love his wife. "God knows how crazy I am about her," he told his associates. He recognised that her escape and her intention to expose the conspiracy to a Senate committee hearing made him "a man caught in the middle". Either he had to eliminate her or watch his entire plans be destroyed.

It was perhaps how he loved which was his downfall. His right hand man Barkley Kase criticised him for his possessiveness. Few other men were allowed to speak to his wife. "You all wanted her," Cullen would accuse his associates. Barkley rebuked him: "But not in the way you wanted her. You wanted her the way you want everything. You had to possess it." His jealousy was what probably led Tess to think that instead of being a princess, she had become a prisoner, and drove her to have an affair with an Arab prince and eventually to escape from his yacht which had become her prison.

At the end of the episode, Archangel told Hawke that Cullen's yacht had been intercepted by the Mexican government and had those on board in custody. 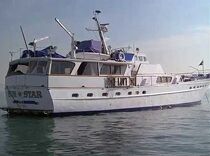 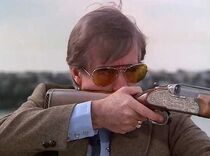 Dixon with his Beratta shotgun 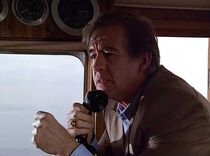 Dixon, looking less composed than usual. Barkley Kase has just told him that Airwolf has shot down to of his fighter jets.

Cullen Dixon is played by Clu Gulager.[1] This was his only appearance on Airwolf.