Hawke goes undercover as an exchange pilot after the F.I.R.M learns someone in the Air Force is plotting to steal a tactical jet for the Soviets. But Hawke is soon torn between duty and friendship when he learns the traitor is Major Sam Roper a former Vietnam war comrade who is hoping to rescue his son held captive by the Russians, and Roper's wife Nhi Houng is an old girlfriend.[1]

Over at Ho Chi Minh City, a waif steals something from a stall. Some men chase and corner him and then beat him up. Another man, Zimmer, comes and picks him up. "How would you like to meet your father?" Zimmer asks. The boy, Ho Minh Truong says his father is a pilot in America and so is mother. But Zimmer repeats the question like he is someone who can arrange the matter.

Hawke is in his cabin after a difficult test flight for Airwolf. Archangel and Marella are trying to persuade him to take on a mission. The latest USAF tactical aircraft will shortly be deployed to their operational bases. They know one of the ferry pilots plans to defect to Russia with one of the aircraft, but they don't know who.

Hawke agrees and he is sent undercover into a USAF base as an Army exchange pilot. At the base HQ, he bumps into a Vietnamese woman Nhi Huong. It's obvious she's someone Hawke knew, someone with whom he had a relationship with. She's resentful that Hawke left without looking for her. He couldn't help it. When he got out of hospital, Saigon had fallen. What is she doing on the USAF airbase? She will only say cryptically that she's trying to bring her family together.

Hawke meets with Dominic who is undercover as a janitor. Hawke wants Dominic to run some checks on Nhi Huong.

That night, after drinks at the Officers Club withthe squadron mates, the Squadron commander, Major Sam Roper confronts Hawke. Just exactly what is Hawke doing at the base? Earlier on, Roper had recognised Hawke as the helicopter pilot who had once saved him during the Vietnam War. He thought Hawke had gone into civilian life. Now he is sure Hawke is back on a secret mission. Roper says his wife is Nhi Huong and she is the secretary of the General commanding the base. She found out that Hawke's orders come from higher up than the Air Force, in fact, from Langley. Hawke declines to answer.

The next morning, Roper gives Hawke a check flight. He gets Hawke to loosen his seat harness on a pretext and then throws the aircraft about.

Back on the ground Hawke tells Roper he is grounded. But Roper insists he must make that ferry flight. He can't give a reason but he says, if Hawke won't do it for him, will he do it for Nhi Huong?

At a secret meeting with Archangel and Dominic, Archangel congratulates Hawke on his intuition. It turns out that Nhi Huong has a son who lived in Ho Chi Minh City. Now the KGB has apparently got hold of him and transfered him to a Russian air base at Omrylkot near Alaska. And one of the new USAF planes is due to be delivered to Shemya Air Force Base in Alaska. Roper is the squadron commander and he decides on the duty chart. So it looks like he is the traitor, and is going to defect with the aircraft, possibly to trade for the boy.

Hawke is startled and intrigued to hear that the boy is Nhi Huong's son. What's his birthdate? But Archangel tells him not to let his imagination run away with him.

Hawke replies that he wants Archangel to leave Roper alone. He will guarantee that no plane will be turned over to the Russians. And if his guarantee is not good enough, he will trade Airwolf for the boy.

Hawke visits the Ropers. First he gives Sam Roper a few punches. That's for planning to commit treason. Roper claims he doesn't know what it's about but Hawke tells him to be truthful. Hawke is the only person between him and a firing squad. Roper tells him the Russians got in touch with Nhi Huong over a year ago and had been stringing them along, offering to exchange their son Ho Minh in exchange for the fighter. Nhi Huong joins in to plead with Hawke. A man has the right to see his son, she says. He is going to declare an emergency annd ditch the aircraft before it gets to Omrylkot. He figures that the Russians will give him Ho Minh just for trying. Hawke tells him not to be naive. They must do it his way.

Hawke makes a call to Dominic and arranges a rendezvous in the desert. Roper sends out the duty assignments to the ferry pilots. He and Hawke will be taking the ferry flight to Shemya. As planned, they take off and then land in the desert. Hawke transfers to Airwolf with Dominic which he instructs Roper to continue with his flight plan.

In flight, Archangel calls up Airwolf. He has figured out what Hawke is trying to do. Can he help? Feed my dog, Hawke replies. Nearing Omrylkot, Airwolf descends and mimics the tactical fighter. Some MiGs are scrambled to escort him in, so he fires a missile to act as a decoy. Airwolf charges into the Russian airbase and shoots up the defences. Dominic drops off and rescues the boy and bundles him on board. The hard part is over, now comes the harder part--evading US defences on the way back.

Back at Hawke's cabin, Hawke watches Roper playing with his son outside. Inside Archangel tells Hawke he doesn't understand how Airwolf managed to evade US radar during the flight. Ask Dominic, Hawke answers. Nhi Huong enters to thank Hawke. Hawke tells her it's time for some honesty about the boy. His lastname is Roper, she says. That's the only answer she will ever give. Hawke says he has to be content with that, but he will be there for the boy whenever he is needed. He has to be, Nhi Huong says, because they are giving him an American name. And she asks him to guess what it is. Hawke is aghast. Stringfellow is not a name for a boy! 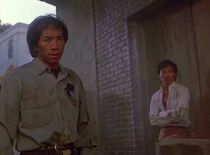 These toughs who confront Ho Minh at the start of the episode are not credited. 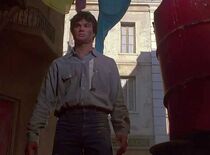 Nor is this one. 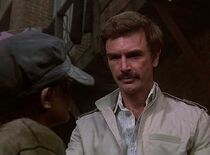 Charles Knox Robinson as Carl Zimmer, a KGB officer who plans to trade Ho Minh for a USAF tactical fighter. 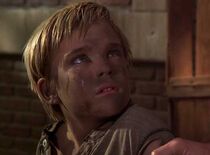 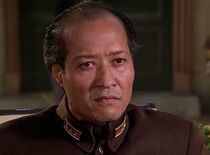 Aki Aleong as the Vietnamese Colonel Quoc. He's quite thorough with the procedures before releasing custody of Ho Minh to the KGB, and this exasperates Zimmer. 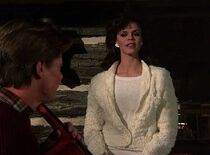 Marella seen here trying to persuade Hawke to take on an undercover mission. She's in a white sweater and not in the white jumpsuit that's common for Archangel's aides. 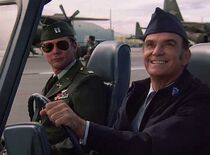 Gene Bicknell as a jeep driver seen here with the undercover Hawke. He is admiring a formation of jets overhead. Hawke addresses him as "Chief". 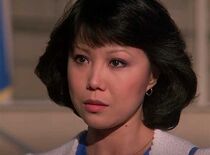 Irene Yah-Ling Sun as Nhi Huong, wife of USAF officer Sam Roper and someone from Hawke's past. 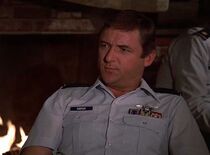 James Whitmore, Jr. as Major Sam Roper, commander of the squadron responsible for ferrying the tactical jets to their operational bases. 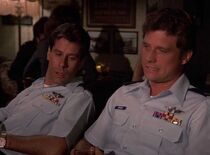 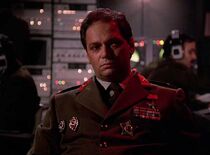 Radu Gavor as the Russia Air Force officer at Omrylkot. He doesn't understand why the KGB always has such complicated methods. Zimmer tells him to just obey his orders. 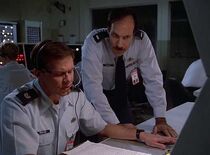 Larry Margo (right) and Duncan Wilmore (left) as two controllers at a US radar station. Hawke needed to talk his way past them about deviating from the flight plan. 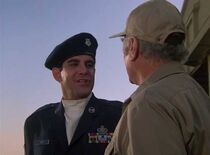 Stan Roth as an M.P. seen here with Dominic.
Add a photo to this gallery 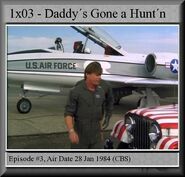 Retrieved from "https://airwolf.fandom.com/wiki/Daddy%27s_Gone_A_Hunt%27n_(episode)?oldid=9602"
Community content is available under CC-BY-SA unless otherwise noted.