Hawke reluctantly accepts an assignment to fly a reporter to do a story about a "back to nature" religious community but soon find out that a group of terrorists are holding them hostage and are intent on blowing up a huge hydro-electric dam near their village. [1]

Dominic and Caitlin all have convenient excuses and so Hawke is saddled with the assignment to fly the journalist Kelly Dayton for her assignment over the weekend. Hawke is reluctant to go, but Kelly is not so keen either. She doesn't think much about being sent to interview a "back to nature" anti-technology religious community while her colleagues get plum assignments. She thinks she is being punished by her editor.

Arriving at the community, they meet their leader, Brother Jebediah. The preaching, the singing all seem normal but Kelly tells Hawke she feels a "frisson", a shiver, like when the devil walks by. Hawke shares the feeling.

Kelly and Hawke are right, for in reality, Brother Jebediah is a German-born terrorist named Johann Rector, a member of a "brotherhood" trying to free its fellow members from U.S. prison through acts of terror. Hana, his companion and apparently the number two in the group is unhappy about the presence of Kelly and Hawke. She thinks Rector is enjoying his religious persona too much and warns him not to lose his way.

Kelly and Hawke continue to have strange encounters. There is a stiff and awkward interview with Estelle Longwood (whom Jebediah presented as his wife) and Sara Longwood who had originally written to the station to invite a reporter to visit. Over lunch, Estelle breaks out into tears when Hawke mentions how few children there are.

Later, while watching the community work in the fields, Sara approaches Hawke and asks him to help them but she can't talk more as Hana approaches. They arrange to meet in the woods that night but Sara misses the rendezvous because Brother Ahab, one of the terrorists, is patrolling the area. Hawke snoops around in the woods and meets Kelly doing the same and to their surprise, they discover a B-25 bomber under camouflage nets being loaded up with bombs and rockets! Hawke concludes they must be after the Tidewater dam nearby. Kelly thinks they must also be the same people who attacked another dam in the Southeast just a year ago.

Hawke and Kelly make for their Jetranger to escape but find that someone has removed the battery. Rector and Hana turn up at the chopper. Gloves are off--Hana produces a pistol, take them prisoner and locked them in a room.

Hawke devises an escape plan which he thinks Kelly might not approve. He has Kelly undress to distract the guard Brother Ahab while Hawke jumps him and knocks him out. They then stow away on a truck which takes them to another house. There, Kelly and Hawke takes out another two guards. They break into b the house and discover that the real Mr. Longwood, Estelle, Sara and a few other children are being held hostage by the terrorists. Sara volunteers to ride a horse to the nearest town to call for help while Kelly and Hawke create a diversion with the truck.

Meanwhile Hana discovers and frees Ahab and raises the alarm. Hawke and Kelly head to the B-25 presumably intending to disable it. However Rector is there at the nose gun and he shoots up the truck. Hawke and Kelly are taken prisoner again.

But their diversion has been enough for Sara, who makes it to a telephone and puts in a call to Dominic. She manages to ask Dominic to help, blurting out "Mr Hawke...the dam" before the terrorists catch up with her and cut the line. Dominic has been worried since much earlier as Hawke did not call when he was scheduled to. He has never before missed a flight plan check in his life. Dominic and Caitlin decide to take Airwolf up.

Back at the B-25, Rector tells Kelly that the terrorists intend to blow the dam and Kelly will be there to record it. Kelly however tells Rector that she knows nothing about aerial photography. They must take Hawke as well if they want a good show.

The next day, Kelly and Hawke are driven to the B-25 but they knock down their guards and make off in the vehicle. They rush to the house and free the hostages, just as Airwolf approaches and lands. Caitlin had spotted the thermal signatures of the hostages with Airwolf's sensors.

Hawke asks Kelly to lead everyone to high ground while he takes Airwolf to destroy the B-25. They have to hurry as the B-25 is already making its bomb run. Approaching the dam, the B-25 fires a salvo of rockets at Airwolf but Hawke takes the chopper below the dam wall and the rockets pass harmlessly overhead. The B-25 then releases its torpedo at the dam but Airwolf pops up and destroys it with a missile. The B-25 pulls away intending to escape but is shot out of the sky with another missile.

Back at the community, Hawke prepares to take Kelly home in the Jetranger when the children approach them. Hawke offers them a ride in the chopper but Sara is hesitant. She doesn't think it would be appropriate. However Mr Longwood tells them it is all right. One ride wouldn't hurt. He thanks Hawke for teaching them that not everything from the outside world needs to be feared. Hawke replies that they have a wonderful life in the community and he would not rush to change it. The children then rush for the chopper, clamoring to be the first on board. 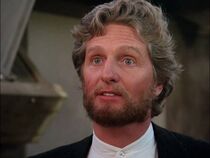 Marjoe Gortner as Brother Jebediah. In reality he is Johann Rector, a German born terrorist. 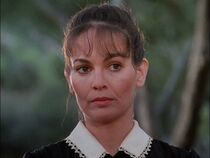 Devon Ericson as Hana. Her fellow terrorists call her by this name. The cover name she used in the religious community is not mentioned. 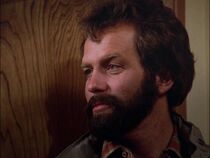 Gregory Walcott plays Brother Ahab, a cover name used in the community. What his fellow terrorists call him in reality is unknown. 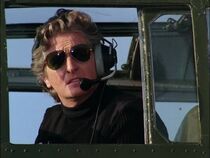 Rector now in his true self, piloting the B-25. 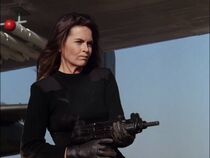 Hana has let her hair down and is all dressed up and armed with her Uzi for the final dam strike mission. 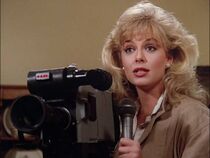 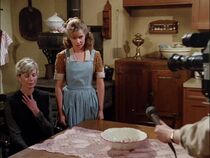 Sara (standing) and Estelle Longwood being interviewed by Kelly. 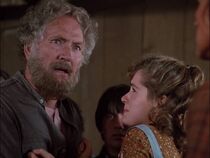 Mr. Longwood seen here with his daughter Sara. Longwood has many lines but is not credited. 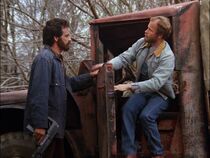 These two terrorists have brief speaking parts but are not credited, unless the one with auburn hair is Salazar. Earlier he was seen shadowing Hawke and Kelly after their arrival at the community.