Desperate Monday was the 50th episode of Airwolf and the 17th episode of Season 3. It first aired on 2/8/1986. There is plenty of ground action for Caitlin and flying for Dominic and Hawke. Archangel plays a central role and has an unnamed aide. For once, Airwolf never fires its weapons but achieves its mission.

During Cate's sorority reunion on board the Queen Mary, some men turn up and try to kidnap Barbara Scarelli. The kidnap attempt goes wrong and ends up as a standoff and a hostage situation. It doesn't look like Airwolf's powerful weaponry can help here. [1]

Where is Clay Kelbaugh who plays the part of Clay? This is his only screen role, so perhaps we will never know. 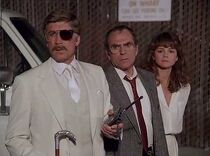 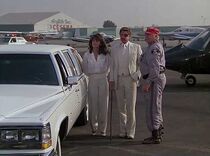 Another view of the unnamed Archangel aide. She is in a jumpsuit but here Archangel did not use a helicopter. 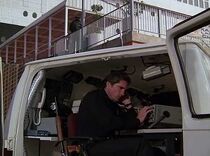 This policeman has some lines but we don't know his name. Could he be Clay? 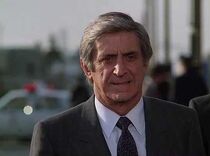 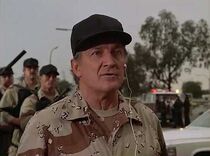 Louie Elias makes another appearance as the Zebra squad leader Sullivan, although he is not credited this time. His name is not given so he could just as easily be Price.