Dr Karl Kruger is an East German intelligence agent who made a one-time appearance in the Season 2 episode titled "Fallen Angel".

Dr Karl Kruger was a East German intelligence agent who crossed swords in Stockholm with Archangel some 20 years before the events in the episode. Then, they not only represented different sides, they were both also lovers of the same woman, an East German agent named Maria von Furster. Archangel did not know it, but Kruger won out and she was devoted to him.

Archangel receives news that Maria had been put on the KGB "whitelist", some kind of hit-list which was issued monthly. He enters East Germany to try to rescue her on a private operation codenamed "Angel of Mercy". This turned out to be a ruse manufactured by Kruger. What Kruger really wanted was to use a truth serum he had developed to program Archangel to kill the F.I.R.M. committee.

However, Hawke saw through Kruger's plan because Archangel's rescue had been too easy. He inserted blanks into Archangel's gun. They then returned to East Germany to Kruger's lab to steal his truth serum. Kruger confronted Hawke and Archangel shot him. 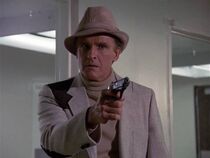 Kruger about to shoot Archangel to prevent him from stealing his truth serum.