Dunkirk is a character who makes a one-time appearance in the Season 2 episode titled "HX-1".

In the episode, Dunkirk is the leader of the mercenary gang which stole the HX-1 helicopter. Dunkirk's nationality is not stated explicitly, but he speaks with an English accent. He lives in fairly luxurious circumstances at a ranch in California where it appears he breeds racing horses. It is not even clear if Dunkirk is his real name or if it is merely a codename, such as is sometimes adopted by mercenaries and others. A child at the ranch calls him "Uncle Michael".

We first meet Dunkirk at a bar where he is attempting to recruit mercenaries to fight somewhere in the Persian Gulf--offering $200 a day, excellent food and the latest weapons to use. Hawke seeks him out there because he believes Dunkirk may have organised the theft of the HX-1. Since Hawke believes only his brother Saint John Hawke or Mace Taggert could have had the skill to execute the helicopter manoeuver used in the theft, he thinks Dunkirk must know where Saint John is. He wants Dunkirk to tell his brother he will find him.

Later, Ellie, a mutual friend of Hawke and Saint John comes to tell Hawke that she had been approached by Dunkirk recently to look after his books. She turned down the job because she was through with the world of mercenaries but Dunkirk had offered a lot of money. It seemed Dunkirk had moved beyond simply being a soldier of fortune to selling arms. And not just small arms. According to Ellie, Dunkirk sold tanks, missiles and ... aircraft.

Hawke calls on Dunkirk at his ranch but Dunkirk denies knowing having the HX-1. Undeterred, Hawke shadows Dunkirk during the night to a warehouse where he finds the mercenary gang gathered and planning a grand display of arms for potential customers at a place called Red Rock Flats. Inside the warehouse, Hawke discovers the HX-1 and the actual pilot, who turns out not to be Saint John, but Mace Taggert, whom everyone thought had died in Vietnam. The gang knocks Hawke out and Dunkirk wants Mace to shoot him. "Finish it!" Dunkirk orders. "You said he deserted you!" Hawke did indeed have to leave Saint John and Mace behind when his chopper became overloaded. But Mace also remembers an earlier occasion when Hawke saved his life. So he can't bring himself to shoot Hawke. He tells the others to just dump him in the desert.

Hawke finds his way out of the desert and shows up in Airwolf just as Dunkirk is demonstrating the HX-1 (flown by Mace) and other weapons to an gathering of potential customers. In the ensuing dogfight between the two helicopters, Airwolf's missiles hit HX-1. The stolen helicopter spins out of control and hits the ground, killing Dunkirk and all those assembled for his arms demonstration.

Dunkirk is played by Michael Halsey.[1] He also played Peter MacGregor Moore in Echoes From The Past (episode). 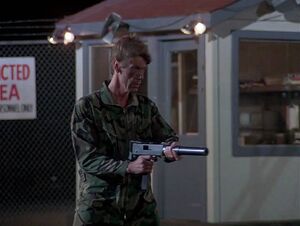 Dunkirk firing the MAC-10 submachine gun during the raid to steal HX-1. 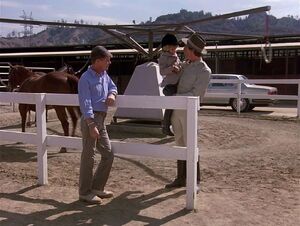 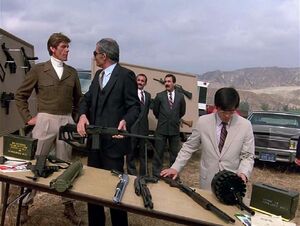 Dunkirk (left) shows off some of his weapons to prospective customers.
Add a photo to this gallery

Retrieved from "https://airwolf.fandom.com/wiki/Dunkirk?oldid=9749"
Community content is available under CC-BY-SA unless otherwise noted.