This episode is notable for its setting at the Reno Air Races with large numbers of foreground and background shots of interesting aircraft.

Caitlin doesn't appear in this episode. Archangel has a brief appearance in his limo, but he is not accompanied by any of his aides.

Roan Carver, a test pilot with the Stappleford Corporation, has discovered a fatal design flaw with the company's latest aircraft for the USAF, the X-400. She is indebted to Lou Stappleford for identifying her potential as a test pilot but can't go through with the deception that may cost the Air Force billions of dollars as well as lives. Stappleford cannot face his company being brought down so he plans an accident at the Reno Air Races to eliminate her. Fortunately, Roan's skill as a racing pilot catches Hawke's eye, or more appropriately, topples his gyros, and he decides to help her. [1]

The episode opens with Roan Carver lifting some documents from the desk of the Stappleford President Lou Stappleford. Unfortunately the theft is soon discovered by one of the security guards who notifies the boss.

The scene switches to Hawke and Dominic flying in to the Reno Air Races. They come just in time to watch Roan fly her Mustang and win the heats of her air race. Hawke is impressed. They go over to greet her but Hawke is tongue-tied! He mumbles an invitation to lunch and she takes a rain check on that.

Lou Stappleford approaches Roan and wants to talk to her about the missing documents. But Roan avoids him saying she is otherwise occupied. She turns back and takes up Hawke and Dominic's offer to lunch. Roan leaves shortly after the meal but Hawke and Dominic notice that she is looking worried.

She is not the only one to be worried. The documents which Roan has point to a serious design flaw in Stappleford's new X-400 tactical fighter and could cost his company a billion dollar contract with the US Air Force. Crane, the aircraft designer and Cole, the test pilot are as worried as the boss Lou, who sends two "toughs", Haver and Morgan, to get Roan and bring her to them.

Haver and Morgan overpower Roan and grab her but Hawke chances upon them and floors the two men. Roan tells him she never asked for his help and they have a brief argument but end up apologising to each other. They have a good evening together but when they return to Roan's room, they find that it has been ransacked by Haver and Morgan. Fortunately they did not find the documents which Roan had hidden away safely.

Roan tells Hawke that she had been the test pilot on the X-400 and that the documents are proof of a flaw in the aircraft design which could cost the US government money and even pilots' lives. Hawke calls in Archangel who arranges a meeting with the Pentagon but Roan wants to fly in the finals of the air race the next day. Hawke disagrees. He thinks it is too dangerous. Roan tells Hawke she knows Lou Stappleford. He might be desperate to cover up the problem and might resort to threats using his toughs but he would never harm her. Hawke, of course, is not so sure.

Hawke is clearly worried and sends Dominic to fetch Airwolf just in case. And Hawke is right. Lou tells Cole, who is flying a Sea Fury in the air race that they have no choice. Once Roan goes public on the design flaw in the X-400, they are all in trouble. So Cole has to dispose of Roan but make it look like an air accident. Then Lou sends one of his men to loosen an oil pipe in the engine of Roan's Mustang.

The race begins and Roan is winning but then Cole moves his Sea Fury close to her Mustang and makes a wing-tip to wing-tip strike, pushing her out of position. Simultaneously, the loosened pipe starts to leak. The engine starts to overheat and oil is splattered all over her windscreen making it impossible for her to see where she is heading.

Hawke sees all this on the ground and grabs a biplane and flies off after her. Catching up, he talks her down to a safe landing on a mesa in the desert. But Lou Stappleford knows that once Roan survives the incident, it is all up with them and he orders Crane to get the X-400 ready for flight.

Lou Stappleford takes off in the X-400 and finds the Mustang with Roan and Hawk on the mesa and starts to shoot it up. Fortunately, Dominic has arrives with Airwolf. Hawke takes off in his helicopter and goes after the X-400. It is a formidable adversary, equally as fast, maneuvrable and well armed as Airwolf. Airwolf is unable to outrun the X-400 in a maze of canyons so Hawke executes a dangerous maneuver, going into reverse with full turbos and making a 180 turn. The X-400 rounds a corner and comes face to face with Airwolf which blows it up with a missile.

Down at the mesa, Roan has been trying to save her Mustang but fails. The overheated engine caught fire and the aircraft is all burnt out. She is distraught. She tells Hawke that when she was young, she dreamed of flying with a pair of eagles who nested near her house. With the Mustang she felt she could join them. Hawke tells her there will be other eagles. But she tells him no. They each only get one. After that, the others are merely airplanes. She tells Hawke she and Dominic will sort out the Stappleford business but then she wants to hideaway somewhere for a while but Hawke does make her promise to look him up in his cabin.

There's really a fantastic range of aircraft to be seen in this episode, mostly in the background. The main ones are listed here: 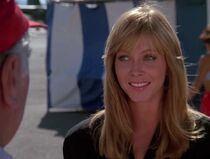 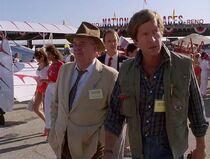 Rale Robinette as Cole (right), Roan's colleague, and also a test pilot of the X-400. On the left is Lou Stappleford and behind is Crane, the chief engineer and designer of the aircraft 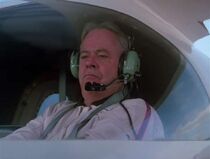 William Windom as Lou Stappleford, seen here at the controls of the X-400. 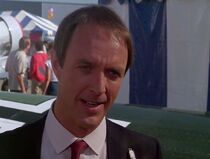 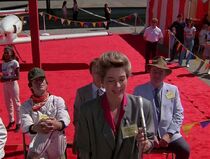 Susan Powell as Blaine. Or at least we think this is her--there is no other female character with a speaking part. She is introducing Stappleford at the Air Show. Unfortunately, because of the camera angles, this is the best shot of her. 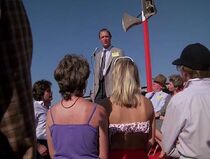 Peter Randall as "Crowd member". Probably the person at the extreme left. He asks Crane (on stage) what kinds of skills the company was looking for. On the right is another view of Blaine, next to Stappleford. 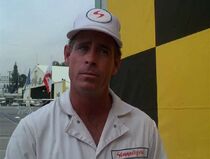 Mic Rodgers as Haver, one of two toughs employed by Stappleford to harass Roan. 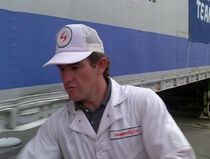 Gary Epper as Morgan, the second of the two toughs. 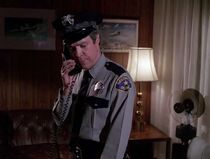 Brendan Boone as the security guard. 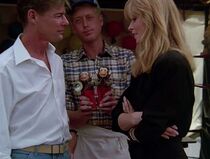 Casey King (center) as the man in charge of the darts game stall. He can be said to be the guy who brings Hawke and Roan together. King also appeared in Natural Born (episode). 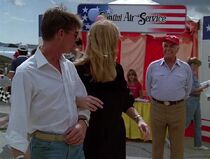 Santini Air actually has a booth at the Air Races. It advertises charters, stunt flying, camera mounts, antique aircraft, aerial photography and a helicopter flying school. The identity of the girl at the booth is unknown. 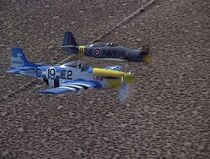 Of the many flight scenes in the episode, this is the one where Cole executes a wingtip to wingtip strike on Roan's Mustang. He is trying to make her crash but have it look like an accident.