Echoes From The Past (episode)

Echoes from The Past

A mercenary, Peter MacGregor Moore tells Stringfellow that he has news of his brother Saint John. After meeting him, Hawke loses consciousness and appears to crash his helicopter. He comes to in a hospital. The medical staff tell him he has been in a coma for a year. In the meantime Saint John has been rescued from a POW camp but Dominic and Archangel both died in the raid to free him. Thinking he now has what he wants, Hawke reveals Airwolf's location to F.I.R.M. representatives. Meanwhile, Susan Hill, a nurse, gets suspicious about the strange goings on in the "private floor" in her hospital. She helps Hawke escape and together they discover it has all been an elaborate ruse. It seems too late as Hawke has already given away Airwolf's secret. It is now up to Dominic and Archangel to come to the rescue--if they can work together.

A mercenary named Peter MacGregor Moore flies over Hawke's cabin in a Stearman and drops a message asking to meet. At the rendezvous, Moore passes Hawke information about his brother St John. He is sitll being held in a prison camp in Vietnam. Moore tells him Archangel knew about this but withheld the information while he planned a raid. He Hawke not to check with Archangel and then parts ways. The information is free--even mercenaries have a heart.

Hawke lifts off in his chopper and begins to feel dizzy. Next thing he knows he is barely conscious next to a crashed helicopter.

Hawke wakes up and finds himself on a private secured floor of a hospital. One Dr Rothchild tells him that he has been in a coma for the better part of a year. He also tells him that Dominic came to see him but he is now dead. He had taken part in a raid to rescue St John. The rescue had been successful and his brother has been brought home but Dominic and Archangel were killed.

Outside the ward, Dr Lisa Holgate, a psychologist disagrees with Dr Rothchild for breaking the news so suddenly to Hawke. Nonetheless he appears to be taking things well.

In an elevator, Nurse Susan Hill is riding up with St John. She tells him it doesn't go any higher but St John says it does if one has a key. She steps off while St John continues up. Susan is intrigued. Earlier on she had been reprimanded and chased off the floor when the elevator accidentally went up to the private floor.

St John calls on Hawke in his room and they get reacquainted. In a monitoring room, Lisa Holgate, Rothchild and Abrams, a FIRM man, are watching and congratulating themselves that Hawke's recovery is proceeding well. Abrams wants Hawke's medication to be reduced so that he is less groggy and can tell him what he wants by that evening. Lisa thinks it is too soon but Abrams insists. The more they delay, the greater the risk.

That evening, Rothchild and Abrams call on Hawke. Abrams introduces himself as a FIRM man, and Archangel's successor. Since Hawke has what he has always wanted in the way of St John being brought home, would he now reveal the location of Airwolf? Hawke agrees and asks for a Las Vegas area sectional map.

Rothchild, Abrams, Lisa and now Peter MacGregor Moore meet outside and are delighted. Stage 1 has been completed. Now they will prepare Hawke for Stage 2. But they reckon without the curiosity of Nurse Susan Hill. She is still puzzled about the private restricted floor and sneaks up to it and gets into Hawke's ward. Hawke grabs her and wants answers. She tells him the date, which is just a short time after his crash. Hawke shows her the calluses on his hands. He wouldn't have calluses if he had been comatose for a whole year.

The story rewinds to a field somewhere. Archangel is there with Marella and another aide Charlene. Dominic also arrives on scene. There is a puzzle. A helicopter which Hawke had been flying is right there, undamaged, with no sign of foul play. The only finger prints are those of Hawke's and he has disappeared. Archangel takes Dominic to a portacabin where Marella briefs him on a dangerous spy team which had been reported coming to the United States. These included the East German agent Eric Mass (Abrams), Klaus Kinter (Rothchild) and Anastasia Zacov (Lisa Holgate). The latter was a specialist in mind altering drugs. The group had also been seen with Peter MacGregor Moore. They had also been in touch with Major Mufta Ben-Kamal (see Episode 1). He and his boss Gaddafi wanted Airwolf above all else, and now Hawke has disappeared. The group must be holding Hawke and working on him to get its location. Archangel asks Dominic to tell him where the helicopter is. Despite his and Marella's most sincere appeals, Dominic refuses.

Back at the hospital, Susan convinces Hawke that she is on his side. They escape from his ward together but the alarm is raised. They hide in a side room and find that it has been set up as a broadcast studio. They had been making fake news broadcasts for Hawke to watch in his room. He sees pictures of St. John on the screen. That's my brother, he tells Susan. "Which one?" she asks. To her there are two different men who look fairly alike. Hawke realises that he has been had by a fake St. John. And now he has revealed the location of Airwolf! But no time to worry about that. Just then, the door bursts open and the fake St. John comes in and takes them prisoner.

Moore tells Hawke how he had been set up. The photo of St John had been treated with dope to make Hawke pass out. The helicopter had been rigged to land by remote control. Hawke and Susan are bundled into an ambulance and then a C-130. They land in the Valley of the Gods. The terrorists point a gun at Susan and force Hawke to fly Airwolf out of the lair and load it onto the C-130. Then they take off for Cuba.

Everything looks settled for the spies but there's always a catch. Dominic had anticipated the move and has hidden himself inside Airwolf! He crawls out and disarms Elsa and the fake St John who are on guard in the C-130 cabin.

In international air space, the C-130 meets up with its Cuban fighter escort. But it is too late. Hawke extends the rear cargo ramp and deploys Airwolf's drag chute. The helicopter, with engines running, is pulled out of the C-130. It falls towards the sea but the engines pick up just in time. The Cuban MiGs attack but Airwolf fights them off, shooting down a few. One MiG launches a missile at Airwolf but Hawke decoys it to the C-130. It hits the large aircraft, which explodes, killing all the spies inside.

Back at Hawke's cabin, there's a celebration. Archangel is alarmed that Susan knows the location of Airwolf. But she says she doesn't really. It went by very fast, and she was asleep when they landed. Sort of. 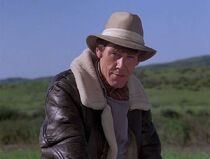 Michael Halsey as Peter MacGregor Moore. He tells Hawke that he has news of his brother Saint John. In reality he is setting a trap. 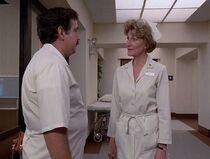 East German spy Else Manheim in her persona as Nurse Simmons. The man she is with has plenty of action but doesn't seem to be credited. 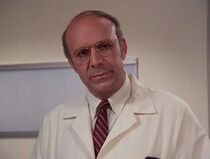 Another East German spy, Klaus Kinter. He tells Hawke he has been in a coma for one year. 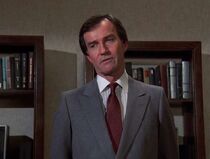 Eric Mass (Robert Hogan). He appears to be the leader of the gang. He adopts the persona of Martin Abrams, a F.I.R.M. director, in order to extract the location of Airwolf from Hawke. 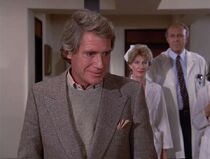 Christopher Connelly. In other episodes he plays the real Saint John. Here he plays an imposter who looks like Saint John, at least to Hawke's drugged mind. 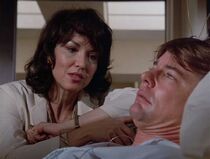 Anatasia Zarcov adopts the persona of Dr. Lisa Holgate, a "shrink". In reality she is a Russian expert in the use of behavior modifying drugs. 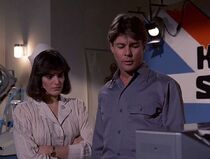 Nurse Susan Hill stumbles upon the strange goings on and helps Hawke escape. 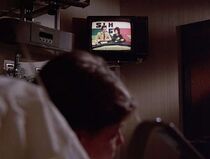 This is the best view of the two anchors (Fred Holliday and Rebecca Clemons), putting up a fake news show for Hawke's benefit. 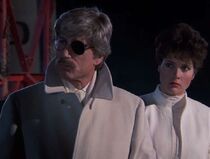 There is a credit for a "Charlene" played by Sally Hampton. This woman next to Archangel is part of the FIRM investigation team at the crash site. She has one or two lines, so she could be Charlene. 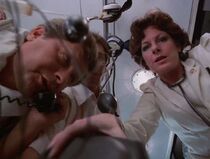 There are two credits for a man and woman in white coats (Bobbie Bates and Jerome Anson Blackwell). These could be them. Compare the view of Blackwell with his character in Inn at the End of the Road (episode).