Saint John's girl when they were in Vietnam

Married someone else after the war

Ellie is a character who makes a one-time appearance in the Season 2 episode titled "HX-1".

We first meet Ellie during one of Hawke's flashbacks to the Vietnam War. She is taking a photo of Mace Taggert, Saint John Hawke and String outside a hospital. Later she is relaxing in a bar with the three of them. Mace is trying to hit on her and this annoys Saint John. She goes over to Saint John and asks if he loves her. He replies, "Do I love living?" This talk about living and dying upsets her. But Saint John tells her he loves her, back in the States. There they will get married and have lots of kids.

After the war, with Saint John MIA, Ellie married someone else, an accountant by the name of "Arthur" and has a baby son. When String visits her, she tells String she is happy but "it's not saturday night in Da Nang with Saint John Hawke." She thinks she blew her chances with Saint John, "a guy you always dreamed of." Apparently she had spent a "night of folly" with Mace Taggert and this had led to a lover's quarrel with Saint John, after which they broke up. Her present husband was "Mr. 6.18". He pulls into the driveway everyday at exactly the same time. String tells her he believes Saint John is still alive but she insists he is dead. "Accept it!" she tells him.

Later, she comes to Santini Air to tell String something else. A month before, Dunkirk had approached her to ask her to manage his books because he needed someone he could trust. She turned him down because she was through with that world. She tells String that Dunkirk had gone into selling arms, but not just small arms. He also sold rockets, tanks even aircraft. Having given String a clue as to who might have stolen HX-1, she tells String to be careful.

Ellie's occupation and what she was doing in Vietnam is not clear. She could be a war correspondent. The photo she was taking of the friends was outside the 123rd Evac Hospital so she could also have been a nurse. However a clue to her occupation lies in Dunkirk approaching her to manage his books. This suggest that she is an accountant by training and had served in some finance position in the US Army in Vietnam. The fact that she tells String she is through with that world suggests that at one time, she was associated with soldiers of fortune like Dunkirk. 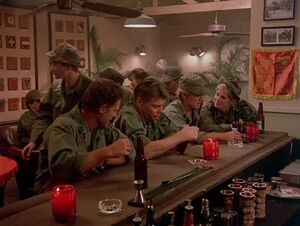 Ellie with Saint John, String and Mace at a bar in Vietnam. 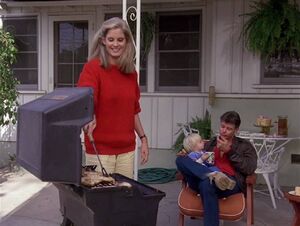 String visits Ellie and her son after her marriage to "Arthur". 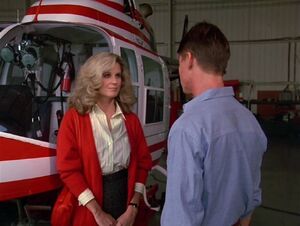