Caitlin, Archangel and Marella do not appear in this episode.

Hawke and Dominic are collecting scientific data near the smoldering volcano of Mt. Catherine when they get caught in a sudden eruption and are forced to make an emergency landing near the mining town of New Gideon. Hawke and Dominic soon discover what is behind the town's"spooky" atmosphere and they go to the rescue of the miners who are being oppressed by the local mine manager and the police chief.[1]

Hawke and Dominic are out in Airwolf over Mt Catherine collecting gas samples from the smoldering volcano--data which, according to Dom, will help scientists predict its next eruption. Meanwhile, down at the nearby mining town of New Gideon, Mrs Amelia Davenport is giving a speech to the miners at a ceremony to open a new mine pit. The ceremony is over and Mrs Davenport leaves for Denver in her limo. The mine management also decide it is time for some R&R. John Cove, the general manager, and Chief Crammins, the Chief of Police, some of the town policemen and the company pilots take the company choppers for a spot of hunting in some nearby woods. It is all routine.

Unfortunately the Mt Catherine decides its time to shake up the routine and erupts explosively without warning, smothering the surrounding area in a vast cloud of ash and dust and forcing Hawke to execute an emergency landing. Nearby they spot a police car with Officer Hardeen dead inside--he had been overcome by the ash cloud. Hawke and Dominic decide to take his body back to the town in the police car.

New Gideon has what Dominic calls a spooky atmosphere, deserted and covered in ash. They pull up near the company store where a party of looters spot them and take off. Inside the store they find the company chief accountant Lester Bowden in a panic. He asks Hawke and Dominic not to leave because there is valuable company property to protect, but Hawke and Dominic say that the priority should be to check for injured people and set up an emergency facility with heat, light and power. Bowden agrees to use the company store and shows them the emergency generator.

The next morning Hawke and Dominic are out doing the repairs on Airwolf when they are urgently summoned to the company store by Bowden. They arrive to find Bowden pointing a gun at Nick Cranovich. Bowden tells them Cranovich was one of the looters but Nick explains that the miners had come to fetch supplies from the emergency lockers but found them empty. They were only trying to get emergency supplies which they were entitled to, in the form of heaters, food and blankets. The company would not provide electricity for heater and the miners had to buy heaters from the company store and these get repossessed if the miners fall behind on their quotas. Hawke asks Bowden if all these allegations are true. Bowden awkwardly admits that he doesn't make the rules. He doesn't like what is happening but he is not in charge.

Nick comes back from seeing his wife and tells them she needs a doctor. Apparently Doctor Fisher had been arrested the day before with two mine workers to prevent them from complaining to Mrs Davenport about conditions at the mine. The town jail, however, is empty--Bowden suddenly remembers that the prisoners are not in the jail but have been locked in an old abandoned mine tunnel so that Mrs Davenport won't see them.

Realizing that the tunnel would not withstand the shock of the eruption, Hawke tells Cranovich to fetch the other miners and they hurry to the scene. After a few tense minutes the prisoners are found and released. The rescuers hurry out, with Hawke and Cranovich the last to climb out before the tunnel collapses.

Back at the company store, Mary Avery, one of the freed prisoners tells Hawke and Dominic she and Doctor Fisher had been locked up to prevent them from complaining to Mrs Davenport about how the miners' health and pension plans were being systematically ripped off by the mine manager John Cove, Chief Crammins and his other cronies. The discussion is interrupted by the arrival of a limousine outside.

Mrs Davenport had been caught in the eruption also and it had taken her car 24 hours to make it back to New Gideon. She is injured and needs medical attention but Mary blocks the way. There are good miners inside and she doesn't want her inside with them. But Hawke is insistent. Anyone injured has a right to medical attention. If the miners denied it to Mrs Davenport, Hawke would hold them responsible. But Hawke tells Mary he only wants Mrs Davenport to get medical help. He didn't say Mary couldn't speak her mind.

John Cove and Chief Crammins finally make it back to New Gideon. The choppers of the hunting party had grounded by the eruption and it had taken them that long to get them fixed. Inside the company store Mrs Davenport confronts Cove. She has heard all about the mine conditions and the health fund ripoff from Mary and the miners and she fires Cove. The mine manager is, however, defiant. Mrs Davenport doesn't have a majority interest in the company and the rest of the directors happen to like him because of all the profits he turns in. If Mrs Davenport fires him, she will be the one fired by the board.

After Cove and the Chief leaves, Mary asks Mrs Davenport if Cove is right. Mrs Davenport is seized with doubt. She only owns one third of the stock, and Cove really is popular with the other directors. Mary offers to go with her to Denver to testify about the mine conditions but they still need positive proof. This comes from Bowden. He has had a crisis of conscience and now steps forward with his ledgers. These would be the evidence they need to nail Cove.

The next morning the miners give Davenport, Mary and Bowden a warm sendoff and Hawke and Dominic go back to fixing Airwolf. But Chief Crammins spots Bowden leaving with the ledgers and warns Cove who orders all the company choppers into the air. Cranovich spots the Chief's Jetranger lifting off and runs to fetch Hawke and Dominic. He tells them he thinks the Chief and Cove are trying to stop Mrs Davenport. Looking at Airwolf, Cranovich says she looks fast. "I hope it is faster than the Chief's," he says.

Besides the Chief's Jetranger, Cove also has two rocket armed Hughes which are normally used for prospecting and these start strafing the ground around Mrs Davenport's limo. The car takes a wrong turn and ends up at the bottom of a mine pit. Cove orders the Hughes to finish her off. One of the pilots says this one is triple bulls-eye but he hasn't reckoned on Airwolf which now arrives on the scene. It's three to one odds but not for long. Airwolf shoots one Hughes down and leads another one towards the Chief's Jetranger, pulling up at the last moment and causing the last two choppers of the bad guys to collide into each other.

Back at New Gideon, the occupants of the limo are telling everyone about their deliverance. "It was stupendous," declares Mrs Davenport. "I'd certainly like to thank those gentlemen that flew the plane.... She spots Hawke and Dominic walking up and adds, "If only I knew who they were."

Hawke and Dominic had come back to say goodbye. Mrs Davenport tells them she will be appointment Mary to take over Cove's job as manager. Mary is reluctant because she says she couldn't boss people around. "You know very well that you don't boss anyone. But you can lead them," Hawke tells her.

Nick Cranovich comes out from the company store looking slightly stunned. Hawke and Dominic ask about his wife as she has just gone into labor. She's fine, they're all fine. All? Apparently she's just had triplets. Nick lists their names and then, probably thinking about his new responsibilities, passes out in front of all of them! 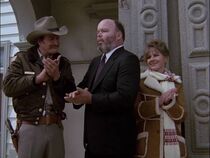 Chief Crammins, Cove and Mrs Cove, the people who really control New Gideon. Here they are applauding the speech by Amelia Davenport 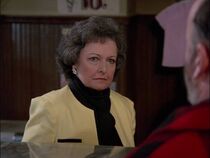 Amelia Davenport, whose family used to own the mining company. Here she is caught in the town of New Gideon by the volcanic eruption. 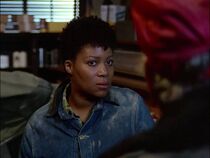 Mary Avery, feisty ore truck driver of the mining company. She's suspicious about whose side Hawke and Dominic are on. 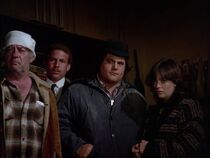 Nick Cranovich (center) with his pregnant wife Mrs Cranovich (right). She's played by Angela Cartwright of Sound of Music fame. At the back, the man in the suit is the limo driver played by Leon Rusty McClennon. This is one of the best frontal images of him. 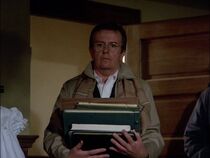 Lester Bowden, the chief accountant of the mining operation at New Gideon. Left to hold the fort during the eruption, he later sides with the miners. He is holding the ledgers which he says will expose the wrongdoings of the manager Cove. 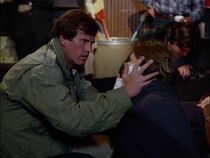 Dr. Fisher, the doctor of the town (and probably a company employee) appears in many scenes but has no lines at all and goes uncredited. 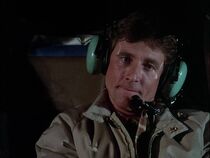 John David Yarbrough plays a chopper pilot with many scenes and lines. However he is billed simply as "pilot". Bowden talks in a late scene about "how good a pilot Jonesy is." So his name could be Jonesy. 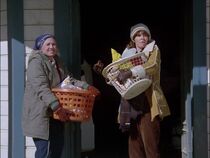 There is supposed to be a character billed as "Woman" played by Karen Blank. This could be the woman with the orange basket. She has a line or two, calling "police, police!" They have been pilfering supplies from the company store after the eruption when they spot Hawke and Dominic arriving in a police car. 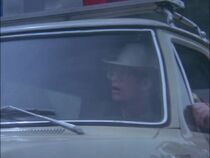 There are several mentions of a Officer Hardeen who is killed during the volcanic eruption. Here he is being caught in a cloud of volcanic ash. Hawke and Dominic drive his car and his body into town. The character is not credited. 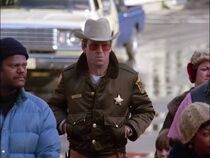 This police officer at Amelia Davenport's speech could be the uncredited Officer Hardeen. Compare him with the previous picture. 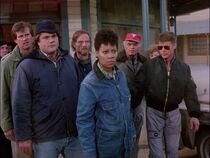 In this group of miners, the man in the center with the beard between Mary and Cronovich appears in several scenes. He is the third prisoner locked up in the mine with Dr. Fisher and Mary. However he doesn't get any lines and is not credited.