Shadow of The Hawke (episode)

United States
Faye is the name of an aide to Archangel who makes a one-time appearance in Season 1 during the pilot Shadow of The Hawke (episode).

After Marella and Gabrielle Ademaur, Faye is the third of Archangel's aides whom we meet in the series. She meets Hawke at Paris to prepare him for insertion into Libya. She has prepared for him his documents and his cover story but tells him there is only so much they could do, given the shortage of time. She also tells him that Angela, the FIRM's agent and Hawke's contact in Libya, is dead. How and why is unknown, but the FIRM had no choice but to insert another one.

Faye sets the tone for the Archangel aides that follow. When the captain of the Enterprise mentions the FIRM's "boys" in Libya, Faye reminds him that one of the boys is a woman and she has already given her life for the mission. 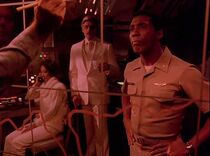 Faye with Archangel on board the U.S.S. Enterprise.

Faye is played by Tina Chen.[1]