The full Airwolf crew appears in this episode. This episode is notable for powerful performances by guest stars Tovah Feldshuh and Walter Gotell.

When her father, a famous Nazi hunter, is murdered, a young woman named Sarah seeks revenge with the use of Airwolf. Sarah wishes to avenge her father's death, which points to the notorious Nazi war criminal Helmut Kruger -- whom her father was stalking. Kruger resides in Paraguay in a fortress, and Sarah's only hope of penetrating the stronghold is Airwolf. She infiltrates Airwolf's hiding place and persuades Hawke and Dominic to help her. Hawke is reluctant until Archangel says he doesn't want Hawke to go after Kruger. "Not everything is black and white," he says. So that's just the motivation Hawke needs.[1] 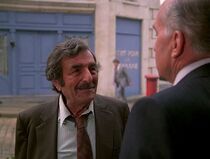 Peter Mamakos as the Nazi hunter Harry Lebow, a.k.a. the Dove. Here he confronts Kruger in a Parisian street. 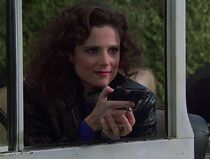 Tovah Feldshuh as Sarah Lebow. She takes over the hunt when her father is killed by Kruger. 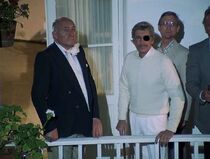 Kruger, ex-Nazi in hiding and an arms dealer, bathed in the Airwolf's spot light. But what is Archangel doing there? 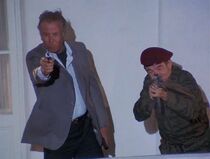 Tony Epper has an uncredited role in this episode with lots of scenes, as one of Kruger's bodyguards. Here he is shooting at Airwolf. 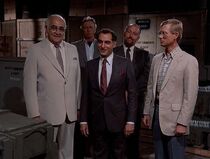 A group of buyers interested in Kruger's offer of Thor missiles. The one in the center is credited as Elias Zarou. At the right is Minter, Kruger's assistant. Right behind, is Tony Epper. 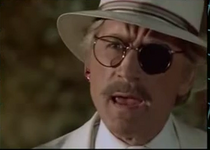 Archangel being very annoyed at Sarah, directly after she shoots him.