Ex-U.S. General Sandower, an extremist, has established a launch pad and support facility at an abandoned desert mining complex. He plans to launch his own personal nuclear missile toward Moscow, with the help of a small private army and launch crew he has organized. As Sandower begins his brief countdown to lift-off, Hawke must use Airwolf to abort the start of World War III. Unfortunately, Hawke's sole aide is a fumbling drunk with a fear of flying. They roar toward the site in Airwolf, hoping desperately to destroy the missile before it gets too far away to be stopped.[1]

Dom thinks that they do not use Airwolf enough, and asks Hawke if they can do regular maintenance flights. When they touch down at Santini Air, Everett says that he received a call from Angie's bar. Dom's friend Eddie is drunk again. Eddie is in the bar, and talking to himself about UFO's. Some other bar customers are looking at him, and he picks a fight with the. Hawke and Dom arrive and take him back to the caravan in the desert where he lives, and put him to bed, then leave. Late that night, Eddie is woken up by a strange sound, which turns out to be some kind of UFO outside the caravan. Even though he tries to hide and run away, the UFO shoots next to him and he I hit. He is taken to hospital and Dom takes him some magazines. Eddie tries to explain what he saw to Dominic, but his heart rate goes dangerously high and Dominic is escorted out.

At Santini Air, Dom is trying to persuade Hawke to check out the desert where Eddie said that he saw the thing. Hawke agrees to look over the desert but only as a favour to Dominic. They search the area around Eddie's cabin with Infra-red, thermal and standard cameras, and copy it onto a DVD. Heading back to the Lair, Dom agrees to talk to Eddie about the UFO's again ("Lecture number one hundred and eleven"). Dom arrives at Eddie's trailer at night time, and gives him the talk. Suddenly, they both hear a whoosing sound, and there is a UFO outside. 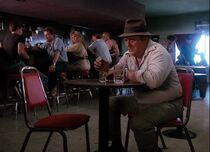 Eugene Roche as Eddie Donahough seen here in Angie's bar talking to himself about seeing UFOs. Note the blonde, Tanya, in the background, who is spying for General Sandower. 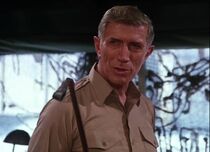 Joseph Campenella as General Elliot Sandower. He has a secret private army and missile base but fears Eddie talks too much about what he has seen. 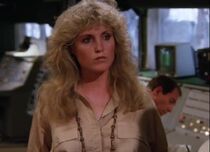 Elizabeth Stack as Tanya, General Sandower's assistant. Among other things, she keeps tabs on Eddie Donahough and other locals to warn Sandower if his security has been breached. 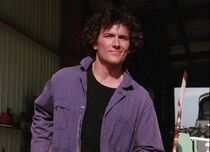 Anthony Tyler Quinn in his first of several appearances as Everett, a mechanic employed by Dominic 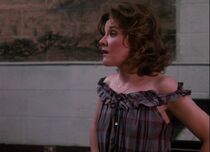 Marilyn Schreffler as Angie, who runs the bar where Eddie hangs out. She summons Dominic and Hawke when she thinks Eddie has had a bit too much. 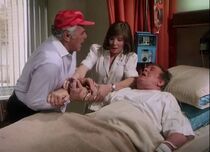 Chris Reynolds as a nurse. Eddie is getting agitated and she is here trying to separate Dominic from him. 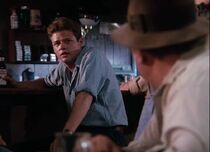 David Orr in a brief appearance as a bar customer named "Soldier". Eddie picks a fight with him although he tries his best to avoid it. 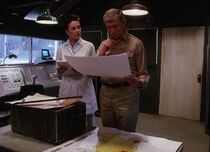 This technician in the white coat has a brief speaking part but is not credited.