Airwolf mounts its own private search and rescue operation when String and Dominic learn that a 747 with Caitlin on board has gone down after being hijacked.

Hawke and Dominic hustle Caitlin off to Dallas to attend her sister's wedding. She doesn't really want to go--her mother is always comparing her unfavorably with her sister.

It is going to be a routine flight on a 747. A fashion designer is sending off two of his swimsuit models to Dallas. The vice-president of the airline, Edward Johnson, is being sent off by his colleague and fellow airline executive, Ingrid Kendall. Johnson is traveling to Dallas to get a loan to expand the airline. There's a little girl traveling on her own, a group of soccer players, and Mrs. Smith--on the seat next to Caitlin--who listens sympathetically to Caitlin about her mother troubles and tries to reassure her that everyone is the same, that is, until she is shocked to hear that Caitlin is a helicopter pilot.

With Caitlin safely on board, Dominic sends Hawke off to his cabin to do his taxes. He has arranged for a "special" accountant, Laurie who specializes in puzzles. Laurie soon needs a break from Hawke's complicated finances. Hawke offers her a drink and things could get more interesting but then ... Dominic comes in with pizzas.

Once the 747 is firmly established on its flight above the Pacific Ocean, a group of 4 hijackers get up from their seats and take over the cockpit. They destroy the radio and force the captain to descend and then ditch the aircraft on the water (not very easy!). The ditching is done successfully and the aircraft sinks to the bottom intact. The hijackers announce the hijack to the passengers, weld the cockpit door shut.

Back at LAX, Hawke, Dominic and Ingrid Kendal gather to hear the news. Marks, an air traffic official plays a ransom tape demanding $50 million ransom. Ingrid wants to pay but Hawke tells her that once she pays, the hijackers would kill their hostages. The officials running the search and rescue are puzzled because the aircraft has disappeared completely and worse, the search will have to be called off soon because of the worsening storm. But Airwolf is not afraid of a little storm so Hawke and Dominic decide to do their own search.

Meanwhile the hijack gang has been busy. Hergos, their leader, had earlier come on board the aircraft disguised as a mechanic in order to plant a homing beacon. Now he sets off with his accomplice Joskins in a small boat to locate the crash site. The four hijackers on board the 747 now don scuba gear and blow a window in the cockpit and swim to the surface to rendezvous with the boat. Their recovery is however interrupted by a Piper Cub which spots them. Hergos cannot allow anyone to find the crash and so shoots the Piper down with a Redeye missile. He then asks Joskins to shoot the four hijackers who are still in the water--Hergos doesn't plan to share the loot with them either.

Inside the cabin of the 747, Caitlin swings into action, in what proves to be her finest hour. She reassures a stewardess and encourages her to go back to work. She then rallies the passengers and keeps them calm. There is much for her to do: helping to serve dinner, treating injuries, telling stories to cheer up the little girl who is traveling on her own, inspecting the fuselage for leaks with the help of airline vice-president Johnson. One passenger, played by Richard Peabody loses his cool and wants to open the fuselage door. When a stewardess and Caitlin try to stop him, he threatens them with a steak knife and Caitlin has to disarm him.

Caitlin's efforts pay off. Soon everyone gets busy doing something useful. The soccer players help to plug leaks. Mrs Smith takes over looking after the little girl. The two models want to help. "Smile!" Caitlin tells them, "...if all else fails, put on a bikini."

Airwolf's efforts are paying off as well. Hawke and Dominic show the air traffic officials photos which taken over the water. One of them seem to show an image of an aircraft underwater. It is still intact. The people in it may still be alive!

Airwolf takes off again and soon locates the crash site. Hawke goes down in scuba gear to take a closer look. Caitlin spots him through the side window of the 747. Caitlin tells them: "We are saved!" Everyone inside is jubilant. They break out the champagne and start singing.

But all is not well. Hergos and Joskins have been monitoring coast guard radio and learn that the crash has been located so they hurry back in the boat. They need to eliminate the evidence so they start dropping depth charges over the spot.

Airwolf spots the boat. At first Hawke and Dominic think it is part of the rescue fleet but then Joskins shoots a Redeye missile at them. Hawke's quick reflexes saves Airwolf, but its weapons systems have been damaged by the near miss. Hawke still needs to prevent Hergos from dropping any more depth charges but he is out of options so he hovers over the boat and engages the hijackers with his pistol. Dominic takes apart a panel and fixes the weapons systems, finally enabling Hawke to blow the boat up with missiles.

The danger is over and the coast guard arrives to the rescue. Everyone is happy but Caitlin still gets a earful from her mother for missing the wedding!

This episode has an unsually large number of actors with speaking parts who are not credited. Many of those who are credited are not identified by name in the dialogue. This gallery represents a best guess about who is playing which part. Everyone is encouraged to help edit and correct the identifications. 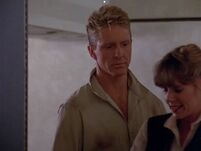 John Calvin as Hergos, leader of the hijackers. 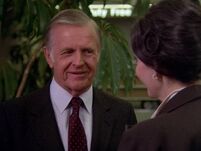 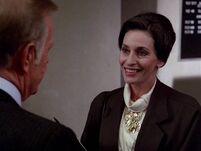 Ina Balin as Ingrid Kendall. These first 3 have prime billing. 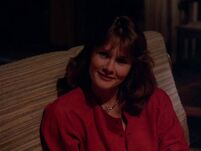 Lynn Herring as Laurie, the accountant sent to help Hawke do his taxes 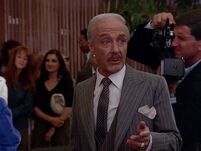 Lester C. Fletcher as the dress designer. He always sends off his models on their flights, he says. 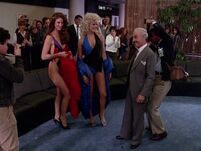 These two models have some lines in the show but are uncredited. 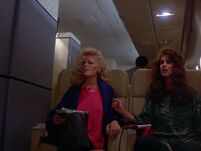 Another view of the two models on board the flight. 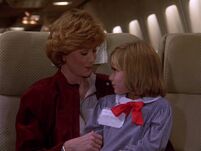 Summer Phoenix as the little girl, here with Caitlin. 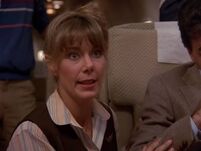 Anne Wyndham. This is the only stewardess with a speaking part. 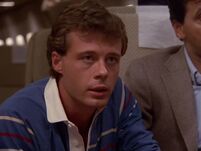 William Kirby Cullen. he introduces himself to Caitlin as Mark but is billed as "1st soccer". He chats up Caitlin, and succeeds! 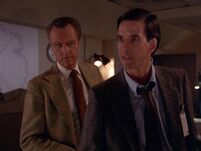 Officials at LAX. Angus Duncan (left) is billed as "Marks"! His role is unclear--FAA, FBI? The person on the right also has some lines. Could he be David McBride, billed as ATC Representative? Compare with the character "Cortuvo" in Airwolf II (episode) 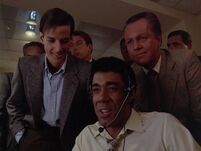 This person in front watches the radar screen and has many lines. Is he David McBride? 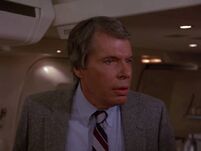 Richard Peabody billed simply as "passenger". Why couldn't they have given him a name? 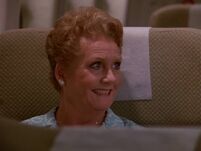 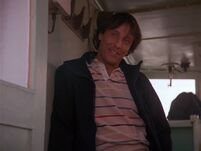 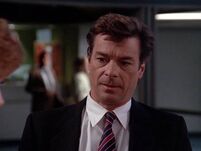 Darwin Josten as uncredited airport security officer. He is bemused by the amount of metal trinkets Caitlin is carrying--all presents for relatives. 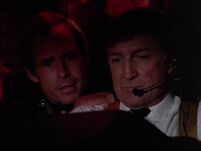 This lead hijacker on the flight and the aircraft captain both have some lines, but both are not credited.