Archangel mysteriously disappears. Hawke and Dominic must find him. It is a race against time. Not only is Archangel in grave danger, the F.I.R.M. will declare him persona-non-grata if he is not found soon and will then seek to eliminate him. Dominic suggests they ask a psychic for help. Hawke is skeptical but she comes through for them. [1]

Archangel asks Hawke and Dominic to meet him in the middle of the desert but when they turn up with Airwolf at Crazy Horse Flats, Archangel's jeep is empty. He has disappeared! Dublin, Archangel's deputy at the F.I.R.M. doesn't want Hawke's help in the investigation and tells him to keep out of his way.

Sam, a F.I.R.M. technician and Hawke's friend, tells Hawke that Archangel had been acting more secretive of late. The F.I.R.M. could not afford to have him "go over" so they have activated the "Zebra Squad", their assasination team. They have orders to eliminate Archangel if he can't be found within 48 hours.

With nothing much to go on, Dominic suggests that they get help from Megan Ravenson, a psychic. Hawke is skeptcial and anyway Megan refuses because it hurts too much to go through it again.

Archangel has actually been kidnapped by Patrick Stoner, a wealthy arms dealer who is after the Fortune Teller device, a sophisticated air combat system which predicts the moves of enemy aircraft. Archangel has been secretly developing this. Now Stoner wants it. He has already bought over Dr. Mikhail Gurvovich, a Russian defector who is one of the developers. He is also planning to kidnap Dr. Professor Stanley Roberts, the co-developer. But the device needs a three part key to run and Archangel has the third. So Stoner puts hims in a mental lab and subjects him to psychological torture to extract the secret.

Late at night, Megan senses Archangel's screams and wakes up. She goes to Santini Air and tells Dominic and Hawke that Archangel is still alive but in grave danger. They take Megan into the desert where Archangel disappeared but Hawke soon gets frustrated by her imprecise statements and they argue. But they finally come to understand each other when Hawke says he thinks her gift must be a heavy weight to carry. No heavier than Hawke's burdens, she says, because she knows he is carrying around a whole load of ghosts. She urges him to let go of some of them.

Megan senses two words, "Julian" and "Warner" and circles a spot on the map: Archangel was there. Hawke sees a place named Warner Springs just south of Julian VOR, a navigation beacon. Dominic wastes no time getting there.

They arrive at Warner Springs in time to see Professor Roberts being kidnapped by Stoner's men. On the ground is a body like Archangel, but it is an imposter. He was a decoy to trick the F.I.R.M. security guards there. Inside a barn like building they find an avionics lab. Megan senses "crenellaitons"--Archangel is in a castle somewhere. Hawke finds a note indicating a meeting between Roberts, Gurvovich and Archangel. Megan knows about Gurvovich. He is an expert in parapsychology and physics and has been developing an avoidance system for use in Russian fighters. "Time to get the lady," Hawke says.

Sam gets them Gurvovich's address but they get there to find the apartment ransacked. Megan senses a Scottish terrier, and Archangel, Gurvovich and a third man in a castle. There is a fighter jet next to them. Suddenly she screams in terror and refuses to go any more--she tells Hawke and Dominic she "really felt death".

Airborne in Airwolf, Hawke asks Dominic to plot a line north from Crazy Horse flats and another from Warner Springs in the direction taken by Stoner's helicopter. At the intersection, Dominic finds a place called Scotty's Keep. A keep is a castle, Megan says.

Airwolf heads for Scotty's Keep but it is not alone--they spot a F.I.R.M. Zebra squad assault helicopter. Dublin has also managed to track down Stoner's location.

Over at the castle, Stoner has managed to force Roberts to install the Fortune Teller device on a fighter and has finally extracted the missing key from Archangel. But there is an alert--the Zebra squad chopper has arrived and has begun it's assault. Stoner orders his henchmen to execute Gurvovich, Roberts and Archangel and then takes off in his fighter.

Taking advantage of the diversion created by the Zebra squad attack, Hawke lands in and rescues Archangel and they lift off again to pursue Stoner. Stoner activates the Fortune Teller device and is at first successful in evading Airwolf's attack. He even manages to get onto Airwolf's six. But Archangel tells Hawke nobody has built a machine that can replace a good pilot. Hawke pulls into a steep climb which causes the Fortune Teller device to overload and Stoner's fighter to stall and crash into the ground.

Back at Scotty's Keep, the Zebra squad has captured all of Stoner's men and Archangel is busy berating Dublin for his hasty action in seeking to eliminate him. Megan asks Hawke if he is interested in taking her to his cabin for fishing and to meet his dog Tet. "I never told you my dog was named Tet?" he asks, puzzled. 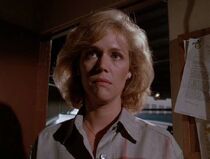 Katherine Cannon as Megan Ravenscroft. Hawke is skeptical of her talents at first but he soon realises that everyone has his or her ghosts to haunt them. 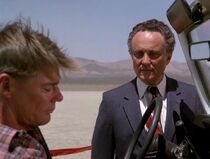 David Tress as Dublin. Some kind of deputy to Archangel, but without the goodwill to Hawke. Here he tells Hawke to keep out of his way. 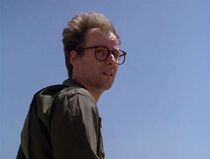 Marvin Karon as Sam, one of Hawke's friends in the FIRM. He keeps Hawke informed about the FIRM's progress, or lack of it, in the search for Archangel. 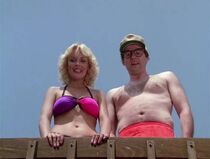 Another view of Sam, on his day off with his girlfriend Tina, played by Rebecca Perle. 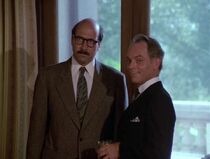 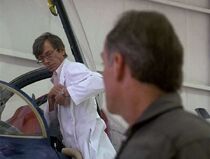 Dr. Stanley Roberts played by Eldon Quick. Here he is forced by Stoner to fit the Fortune Teller device on a jet fighter. 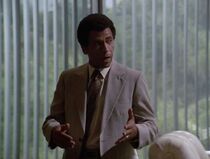 Austin Stoker plays an unnamed FIRM investigator who pieces together the facts behind Archangel's disappearance. 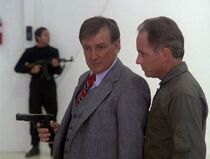 Louis Elias has many lines and a lot of action as Stoner uses him to execute people he no longer needs, but he only gets to be billed as "henchman #2".