Died in nuclear explosion over his missile base

General Elliot Sandower is a character who makes a one-time appearance in the Season 2 episode titled "Firestorm".

General Elliott Sandower was an Army general who was relieved of his duties because of his extreme views. Speaking to the press just after retiring, he told them that he believed the country was heading on a dangerous path which would lead it into "a firestorm". There was an enemy within which was winning and the time was now or never for a surgical first strike. He told the pressmen that he would continue to serve his country his own way. "I'm a soldier, I'll save you once more."

After his retirement, he gather a private army and built a secret missile base in the "Crystal Sands Desert Basin" a (fictitious) remote location somewhere in the Californian desert. His force included a helicopter gunship, armoured vehicles and air defence missiles. Protected by these assets, he began assembling a nuclear missile to deliver the first strike he promised the press at his retirement.

However his activity, in particular the flights of his helicopter, was spotted by Eddie Donahough who lived in a trailer in the desert. He thought he was seeing UFOs, but he talked incessantly about it. Tanya, one of Sandower's assistants, overheard Eddie's babbling at a bar and reported this to Sandower, who decided that this was a security threat which must be eliminated. Sandower sent his troops to abduct Eddie. They also took Dominic who was visiting Eddies at the time. Later Hawke is also captured as he scouts the missile base looking for his friends.

When Hawke, Dominic and Eddie manage to escape from the missile base, Sandower knew his time was running out and ordered the launch sequence to begin immediately. The nuclear missile is successfully launched but Hawke soon returns with Airwolf and fires a Copperhead. This hits the missile and causes a nuclear detonation which incinerate Sandower and the rest of his army. 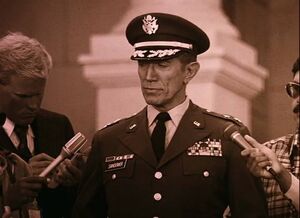 Sandower speaks to the press just after being relieved for his extremist views. This is seen in flashback by Hawke.
Add a photo to this gallery

Retrieved from "https://airwolf.fandom.com/wiki/General_Elliot_Sandower?oldid=9741"
Community content is available under CC-BY-SA unless otherwise noted.