Inn at the End of the Road (episode)

Inn at the End of the Road

Caitlin doesn't appear in this episode. Archangel gets a lot of screen time--this is the first official F.I.R.M. mission for a long time, after all. Surprisingly Marella doesn't appear, although she could have. Archangel briefs the mission and technical details himself. Normally he would leave such things to Marella.

A group of terrorists have stolen "Loki", a computer which is capable of flying an aircraft by itself. It can maneuver an aircraft beyond human limits, allowing even obsolete aircraft to beat the most modern fighters. Archangel wants Hawke and Dominic to recover "Loki" from the terrorists who were last seen heading into the 10,000 square mile Halonan National Forest.[1]

Jarrett, whom Archangel would later call an "idiot" and a "showboat" is showing off "Loki", an advanced flight computer to the board of directors of a technology company. "Loki" can determine the flight envelope of an aircraft and can then maneuver it beyond its design and its human limits. It can therefore get the best out of any aircraft. Jarrett shows footage of an F-86 equipped with "Loki" taking down two more modern F-4 Phantoms.

Outside, a gang of terrorists, Steele, Elena and Roper are in a window cleaner's gondola. They blast their way in, throw tear gas and make off with "Loki". However the getaway is botched by fellow gang-member Lucas and Roper is injured. He is the engineer who knows how to rig up "Loki". According to Steele, he is vital to the mission.

The gang make their way into the Halonan National Forest but soon their car breaks down. They find the Golden Otter Lodge where Steele asks for medical assistance. At the lodge are "Doc" Gifford and his friends, Maxine, Sally, the local sheriff Frank Dudley and Badger. Since "Doc" has been trained as a medic, he offers to take a look. When he realizes that Roper has a gunshot wound, Steele pulls a weapon and holds the lodge party up. Finding out that "Doc" is also a pilot and owns a Jetranger, the gang now forces him to fly them to their destination. The rest of the lodge party are locked in a meat locker, but not before the sheriff is shot during a scuffle.

"Doc" and the gang lift off but are soon intercepted by Airwolf. Archangel has sent Hawke and Dominic after "Loki" and Airwolf's sensors have picked up the Jetranger. Steele instructs "Doc" to lose Airwolf and so "Doc" drops down into a narrow gulley and leads in a high speed chase. Hawke wants to force the Jetranger down instead of shooting it but is not too happy about the tail chase--this is the bush chopper's briar patch and he probably knows the terrain better. This is proven true when "Doc" takes the Jetranger through a narrow road tunnel. Hawke pulls up abruptly, knowing the tunnel is too small for Airwolf but the violent maneuver causes a scrape against the side of a rock face, resulting in some damage to the aircraft. Hawke must now give up the chase and put Airwolf down for repairs.

Meanwhile the terrorists arrive at the destination, an abandoned radar station where there is a Hughes gunship waiting. Roper fits "Loki" to the gunship successfully and so, with no further use for "Doc", Steele instructs Lucas to take him away and finish him off. But the clumsy Lucas, who has made so many mistakes so far, makes yet another one, and allows "Doc" to escape.

Over at the lodge, Hawke grabs a crowbar and forces open the meat locker. He breaks the lock but falls back and injures his right shoulder. Maxine, Sally and Badger are all right, but the sheriff has died of his wounds. Hawke is treated for his injury and his right arm is put into a sling. Meanwhile, "Doc" is upset about the sheriff's death, and wants justice. Maxine asks, "What can we do?" "Plenty," Hawke replies, and heads out to Airwolf with Dominic and "Doc".

Hawke lifts off, a bit unsteadily and Dominic tells him he can't fly but Hawke throws off his sling and tries again. Once airborne, they contact Archangel who tells them there is worse news. The terrorists aren't just trying to escape. They have a contract on Lord Killebrew, a peace negotiator who is vital to the Middle-east peace process. He is out on an unscheduled fishing trip nearby and he is worth $10 million dead to some people. Hawke calls for turbos but the damage Airwolf sustained earlier on means they can't use them!

Time is running out. "Loki" has been fitted on the Hughes and it lifts off. Even though "Loki" can fly the chopper by itself, Steele has put a pilot on board, just in case. The Hughes soon catches up with Lord Killebrew who is flying a Cessna 195 escorted by a UH-1H. The UH-1H escort ship is shot down by the Hughes which then turns its sights on the Cessna. Nearby, Steele and the rest of the terrorist gang are watching in "Doc's" Jetranger, filming the kill for the benefit of their employers.

It might have been a good show but now Airwolf intervenes. "Loki" detects Airwolf's approach and the Hughes breaks off its attack on the Cessna and goes after Airwolf instead. Hawke manages to evade the Hughes' first salvo of missiles but then he passes out! Dominic yells to "Doc" to take the controls. In the meantime he shocks "Doc" by cutting the engines, just as the Hughes fires again. The missile overshoots Airwolf and goes on to hit the Jetranger with Steele and all the other terrorists on board! The Hughes pursues Airwolf aggressively but the violent maneuvers it is doing makes the pilot on board pass out. His hand hits "Loki", shutting it off. The Hughes spirals down out of control and "Doc" shoots a rocket and blows it up.

Back at the lodge, the friends watch a news story about Lord Killebrew successfully concluding another round of Middle-eastern peace talks. Dominic offers "Doc" a job at Santini Air, since he has lost his Jetranger but "Doc" tells them he has everything he wants in the woods ... that is, unless the pay is fantastic. "Top dollar!" says Hawke, "Except Dom still thinks it is 1932!" 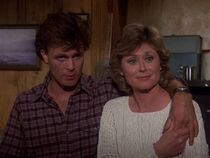 "Doc" Gifford with his girlfriend Maxine. She is also the proprietor of the Golden Otter Lodge. 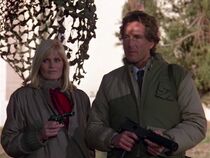 Elena with her Walter PPK and Steele, the leader, with his MAC 10. Both weapons have suppressors. 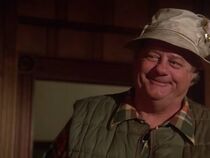 The amiable Sheriff Frand Dudley. Never met a real criminal his whole life, according to "Doc". 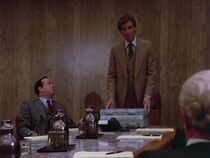 Jarrett (Craig Littler) showing off "Loki" to the board of directors. Jarrett's position in the technology company and the name of the company are not stated. 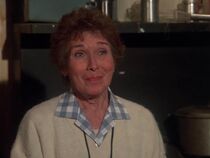 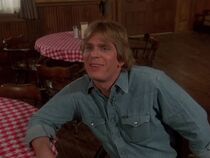 Badger (Alan Toy). He is another of the friends or residents at the Golden Otter Lodge, together with "Doc" and the Sheriff. 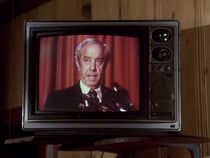 Lord Killebrew as played by ian Abercrombie. He is only ever seen as part of a news story on television. 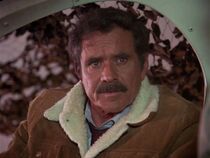 Roper, a member of the terrorist gang, and the engineer who knows how to rig up "Loki". 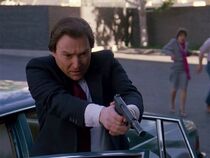 Lucas (Alan Woolf). Trigger happy and clumsy, He starts a firefight when he doesn't need to and ends up getting Roper injured. Seen here with his Heckler and Koch P7. 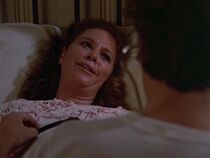 Mary Ann Tarwater. "Doc" delivers her baby at the beginning of the episode. 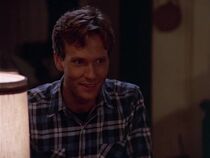 Charlie Tarwater, Mary Ann's husband. Both husband and wife are convinced about Doc's skills although Doc later tells Maxine he was doing it for the first time. 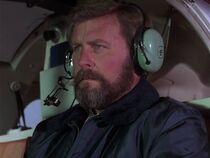 We assume this is Jerome Blackwell, credited as "pilot". He flies in the Hughes equipped with "Loki". 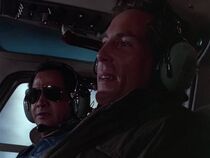 Then this leaves Hany Ghorra as "Co-pilot". He is the one in the sun glasses next to Steele. Why is he a co-pilot? Steele couldn't fly. 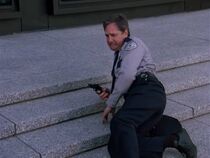 This security guard has a line or two. He shoots and wounds Roper. The part is uncredited and the actor is unknown. 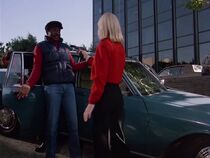 This driver's car slams into the gang's escape vehicle. Elena holds him up and they take his vehicle. He has quite a few lines but is uncredited. 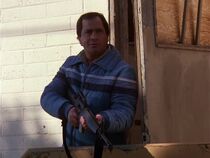 This terrorist receives Steele and gang when they arrive at the old radar station where the Hughes is kept. He nods but doesn't have any lines and the part is uncredited.