Archangel does not appear in this episode.

Hawke, Dominic and Caitlin go to the rescue of an American scientist who has been kidnapped and forced to develop super unmanned tanks which a Latin American dictatorship wants to use to crush its rebel enemies. [1]

Hawke, Dominic and Caitlin arrive with Airowlf in a Central American country. Their mission is to rescue an American scientist, Jason Keith, who has been kidnapped by the Russians and forced to develop some advanced tanks for the government of that country. Gustavo, also known as "El Gato", a legendary revolutionary freedom fighter, welcomes them and tells them he will be glad to be rid of the scientist. It seemed Keith's tanks are unmanned and operated by radio control and have resisted every attempt by his men to destroy them.

El Gato tells Dominic to wait with Airwolf near the town of Santa Theresa where they will be safe. He and Hawke then set off for the camp where Keith is held, assuring Dominic there is nothing to worry. Nothing will go wrong because he has a dinner date with Caitlin at Santa Theresa.

Hawke and El Gato sneak into the camp of government troops under Colonel Majorga and Colonel Ross, an American traitor who is working for the Russians. But there is no sign of the tanks. They free Keith but are discovered during the egress. El Gato is mortally wounded but tells Hawke and Keith to get away while he covers them--his countrymen needed Airwolf more than him.

Hawke and Keith get away. Trekking through the jungle, they meet an American teacher, Jennie Burton who is with her group of hearing impaired studemts. She tells them they were out hiking when their village was destroyed by government troops using three powerful tanks armed with rockets and flamethrowers.

Keith is all for leaving the kids behind because he wants to make their rendezvous with Airwolf but Hawke refuses--they can get to Santa Theresa together.

Evading patrols and helicopters, they make it to Santa Theresa. Everyone else is happy. Jennie is certain they would be safe, El Gato has many armed men in the town to protect them. Even Keith, usually quite neurotic, thinks they have escaped. But Hawke has a strange feeling. Why haven't they seen any government troops for a while? Perhaps they have walked into a trap? He becomes even more alarmed when he sees a black stele--some kind of pre-Colombian relic. Earlier on, Keith had mentioned that Ross wanted to test his tanks in an operation codenamed "Blackstone".

Hawke is right. Mayorga turns up with the tanks and start to decimate the defenders. Fortunately, Dominic and Caitlin turn up with Airwolf in time and destroy the tanks. But the enemy is not done yet--Ross attacks with an armed helicopter, but, as always, he is no match for Hawke and Airwolf. Ross is shot out of the sky, ending the threat to Santa Theresa. The episode ends with Hawke giving Jennie a standing invitation to visit him in his cabin.

Not everyone can be identified. the two "Patrol Leaders" in particular are a mystery. There is no patrol leader with a speaking part, although they may have scripted actions. Some of Jennie Burton's children have names but are not credited. 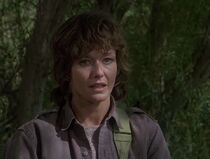 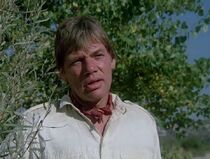 Michael Preston plays Colonel Ross, apparently an American working for the Russians. His exact backstory is not given. 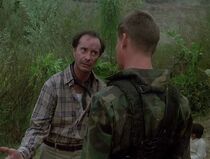 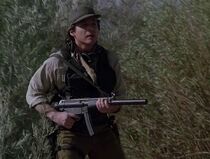 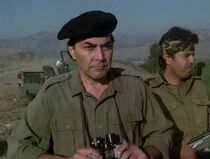 Val De Vargas as Colonel Mayorga. Note the absence of any insignia which might help identify what country he represents. 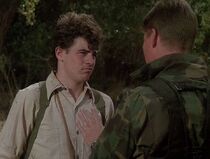 Johnny Kovacs as Raf, one of Jennie's hearing impaired children. He has lots of scripted action but does not get to say much. 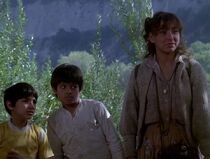 Debra Yon as Solita (right). She has a lot of scripted action including a scene where she fights against a bandit or enemy soldier who attacks their group. The two boys with her are not credited. On the left is Eluid, and center is Javier. 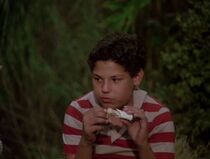 Clemente is also credited although he doesn't seem to get much scripted action. 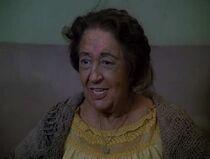 This old woman played by Amapola De Ivano has a lot of screen time and lines, first to her cow and then when leading the children in a song to keep their spirits up. But it's all in Spanish. 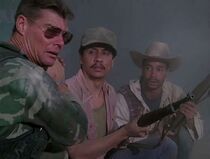 Robert Covarrubias previously played a latino soldier in Crossover (episode). Here he is in the center. 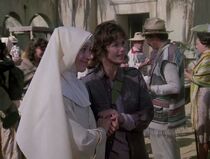 Michelle M. Paulin as Sister Agnes Marie. Jennie is introducing her to Hawke. 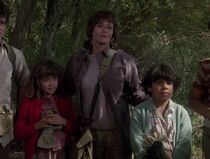 These two girls with Jennie are not credited. On the left is "Irene" and to the right is "Noraina". 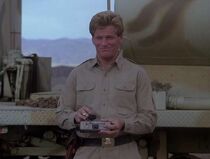 This man who controls the tanks is not credited although he has a lot of camera time. 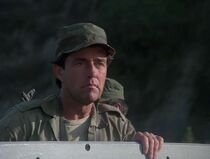 Two actors are credited as "patrol leader" but we don't know which soldiers they play. This soldier has some lines so he could be one of them. 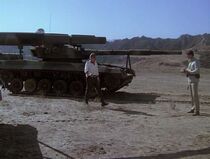 These tanks are not real T-72s. According to the Internet Car Database, they were specially made for movies from M8A1 cargo tractors.