Leann Hunley as Meryl in the Season 1 episode One Way Express (episode).

Probably best known for her roles in Days of Our Lives and Dynasty, Leann Hunley was born on February 25, 1955 in Forks, Washington and attended the University of Washington in Seattle. She made her TV debut in 1977 in a Season 10 episode of Hawaii Five-O "Cop on the Cover" as a secretary to a scientist whose children had been kidnapped. Amazingly, her boss was played by Henry Darrow whom she will meet again at Airwolf! Her acting skills must have been noticed because she next landed another fairly large role in Season 10, "Frozen Assets" where she had a significant speaking part in a solo scene with Jack Lord. Following this, another group of her memorable appearances was as various girl pilots/warriors in Battlestar Galactica.

By the time she starred on Airwolf, Lean had already embarked on what she would become best known for: playing Anna DiMera in Days of Our Lives, a part for which she would be awarded a Daytime Emmy for Best Supporting Actress in 1986. She later played Dana Waring Carrington in Dynasty. In Dawson's Creek, she played Tamara Jacobs, a divorced high school teacher who has a passionate but troubled love affair with her student. In 2007, after an absence of some 23 years, Leann made a return to the character of Anna DiMera in Days of Our Lives[1]

In One Way Express, Leann played Meryl, another one of Archangel's talented and versatile aides. Besides being a computer expert and helicopter pilot, she also excelled in tradecraft and people skills: Archangel sent her in as a "swallow" to chat up Simon Sayes. Her mission was to uncover the secrets of Sayes' partner, master criminal Philip Maurice. Maurice was played by Henry Darrow, whom she had acted together with at the very beginning of her career in Hawaii Five-O. 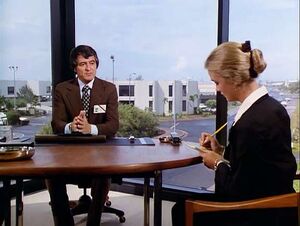 Leann Hunley in the first scene of her TV career. She is secretary to the scientist Stuart Longworth in an episode of Hawaii Five-O. Notice her boss? It's Henry Darrow, who will play Philip Maurice in the same episode of Airwolf she starred in. Her boss here actually addresses her as "Leann". 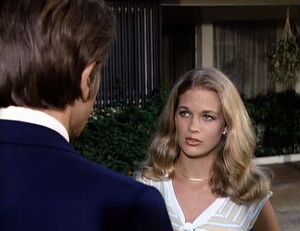 Leann Hunley in her second sortie. Here she is playing Mrs Lucy Sutherland and she has a long speaking part solo with Steve McGarrett (Jack Lord).