Little Wolf was the 49th episode of Airwolf and the 16th episode of Season 3. It first aired on 2/1/1986. There is plenty of air and ground action here for Hawke, Dominic and Caitlin. Archangel, however, does not appear.

Hawke and Dominic visit one of Hawke's old war buddies and his former student, Greg Stewart, heir of the wealthy Stewart family. Soon they find themselves entangled in a custody battle for Greg's son. His mother, the powerful family matriach, Mrs Martha Stewart, refuses to let Greg's wife Rainly have custody of the baby and so holds both the mother and child prisoner. Added to the mix is a crooked sheriff who thinks he is the best pilot in the world. It's a tangle that would take Airwolf to unravel. [1]

Where is Richard Ditore as the security man? 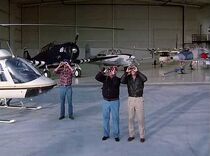 Nice shot of the hangar at the beginning of the episode. Left to right there is a Jetranger, T-6 Texan, T-34 Mentor, Aero Commander 500 and T-38 Talon. 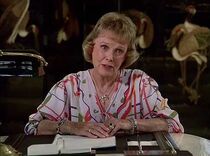 June Allyson gives a powerful performance of the matriach Mrs Martha Stewart who is faced with the collapse of her entire family. 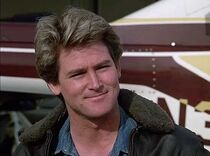 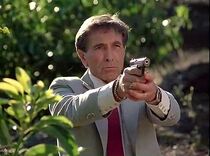 This is David Ashrow, playing the part of "Harry". He's some kind of private security man working for Mrs Stewart. David Ashrow is the husband of June Allyson who plays Mrs Martha Stewart. 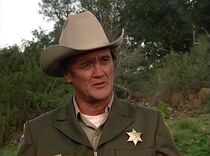 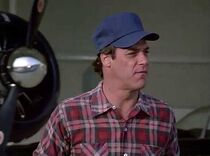 Grainger Hines as Arnie, Waldren's friend and a helicopter pilot 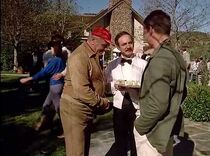 Steve Restivio as a waiter.