Killed when HX-1 is destroyed

Mace Taggert is a character who makes a one-time appearance in the Season 2 episode titled "HX-1".

Mace Taggert is a former member of Hawke's unit in Vietname. When the HX-1 helicopter is stolen and Hawke is asked to find it, he studies the raid and sees that the thieves used a helicopter tactic which only his brother Saint John Hawke, Mace Taggert and Colonel Martin James Vidor employed. Vidor is dead. And so he thinks, is Mace. That must mean that St John is still alive.

Hawke looks up people who might give him a lead, starting first with Mace's parents and then Ellie, St John's former girlfriend when they were in Vietnam. Ellie tells Hawke that a mercenary leader Dunkirk had recently asked her to work on his accounts. Dunkirk was into the arms trade in a big way, selling not just small arms but tanks and ... possibly helicopters. Hawke trails Dunkirk to a warehouse where he surprises Dunkirk and his men and is then surprised to come face to face with ... Mace.

Mace tells Hawke that he survived his time in Vietnam but all "that white powder coming out of the Golden Triangle" was too much of a temptation and he decided to remain hidden. Hawke asks him what he knows about St John but Mace doesn't answer.

Dunkirk's men knock Hawke out and want Mace to execute him. Hawke did leave them at the LZ after all. But Mace's mind flashes back to the times when Hawke saved his life. He can't bring himself to kill him and tells Dunkirk's men to dump Hawke somewhere in the desert.

Later, Mace flies the HX-1 in a demo for Dunkirk's foreign customers. Hawke intervenes in Airwolf, after a dogfight, blows the other helicopter up. 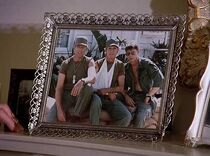 A picture of happier times. Mace on the left, St John in the middle, with Stringfellow to the right. 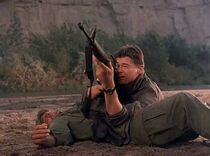 In a flashback, Hawke saves Mace at an LZ. 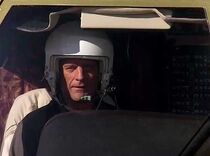 Mace at the controls of HX-1.