Mad Over Miami was the eighth episode of Airwolf season 1. It first aired on March 24, 1984.

This episode is notable for being directed by David Hemmings, who played Charles Henry Moffett.[1]

Dominic accepts a hush-hush mission sponsored by refugee Cubans to ransom two political prisoners in exchange for two million dollars. He has been chosen for the flight because the prisoners had worked with him in his younger days and were people he could recognise. But during the exchange: the money is hijacked, the prisoners returned to captivity and a frustrated Dominic returns to Florida minus the ransom money and the prisoners. Things get rapidly more complicated. Dominic runs out of fuel on his way home and force lands. Hawke has to fly through a hurricane to look for him. The Cuban refugees think he has cheated them, and it turns out the hijacker of the money is the leader of a group of rebels bankrolled by Archangel!

Sanchez forces Hawke to open the door of Airwolf. Hawke tells him to stand clear as the cabin is pressurized. Hawke slams the door against Sanchez, breaks free and lifts off.

Over at Cuba, Dominic and Stella land, only to find that Fernendez is going to doublecross them. But Hawke arrives in Airwolf, scattering Fernendez's troops and shooting up any resistance. Stella gathers the two prisoners and piles them into the Jetranger. Fernendez tries to grad the suitcase of money but Dominic plugs him and takes it back.

Sanchez arrives on the scene in his Hughes helicopter but Hawke isn't going to stand for this and blows it up with a missile.

Dominic's Jetranger and Airwolf are on their way back to the U.S. but they are not out of danger yet. Fernendez summons a flight of MiGs to intercept. Hawke decoys their missiles away from the Jetranger and then shoots down a few, putting the rest to flight.

Back in the U.S. for celebratory drinks, Archangel tells Ivan Rivera that the FIRM had always considered Rivera's organisation a vital link. They now look forward to working together more closely. However Archangel stutters incoherently as to why he had supported Sanchez and not Rivera earlier on. 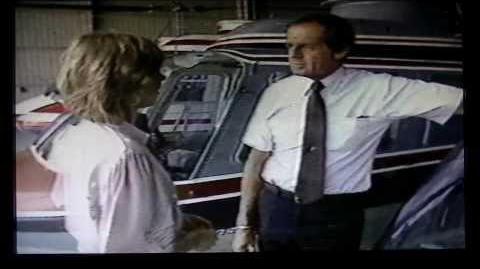 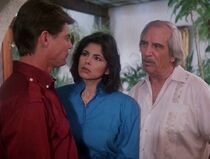 Stella Collarzo (Gina Gallego) and Ivan Rivera (Tito Vandis). They organised the ransom of $2 million for the prisoners. 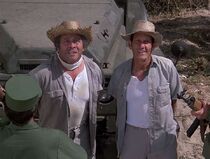 The two prisoners to be ransomed. Ramon Collarzo on the left is Stella's father. Father Gomez is on the right. Both parts are not credited. 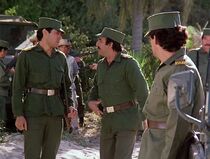 Colonel Fernandez (center) and Sergeant Diaz (left). The FAR on the shoulder stands for Fuerzas Armadas Revolucionarias -- the Revolutionary Armed Forces of Cuba. 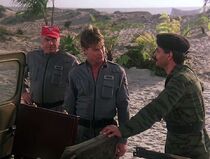 Sanchez (right) has hijacked the ransom money. He shows Hawke a satellite link which Hawke recognizes. It seems Sanchez is bankrolled by Archangel! 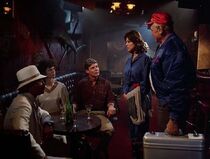 Dominic is carrying a new case of money which Hawke has extracted from Archangel. Stella can't understand their generosity. Archangel says he can't either. 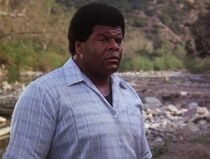 This Sanchez "heavy" subdues Hawke in a fight but he doesn't get a credit. 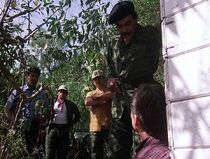 Sanchez and his gang confront Hawke. The one in orange and the one in blue got beaten up by Hawke earlier but they don't get credited either. 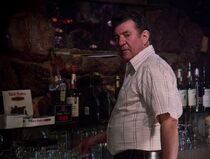