Airwolf's systems begin to act erratically when a strange virus infects the on-board computer which periodically seizes auto pilot control and turns the helicopter into a flying terror of destruction. Hawke and Santini discover the virus is a trap originally planted by Airwolf's designer, Dr. Moffet, and programmed to unleash itself at a specific time unless the proper override code is entered. Hawke and Santini must make the decision to allow the F.I.R.M.'s engineers access to fix the helicopter and risk them trying to seize the aircraft, or deal with the virus themselves. They contact Dr. Karen Hanson, an electronics expert, to troubleshoot the guidance system. Dr. Hanson discovers that a computerized version of Moffett's vengeful ghost is the source of the problem, but the solution seems beyond her mind and experience. [1] 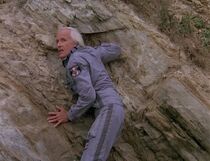 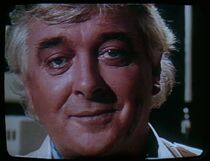 Moffett appears again albeit only on a video sequence that shows up on Airwolf's computer screen. 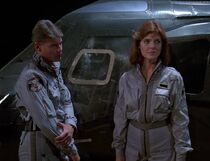 Robin Riker as Dr Karen Hanson. Here she says she's faked out, She thought she had beaten Moffett's computer ghost but she has just returned from a flight where the ghost is still in control! 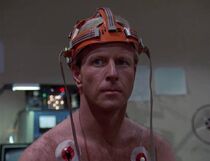 Rodger La Rue as a young pilot participating in one of Hanson's experiments about using thought impulses to control aircraft. Hansen calls him "Stan". 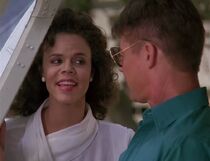 Marella hands Hawke some classified info on Airwolf to help fix the computer. "She must like one of us," says Dominic. 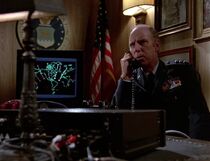 Gary Pagett as General Gilson, presumably the commander of NORAD. 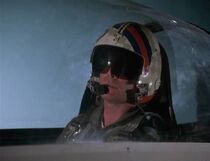 Mark Seliger as one of the two F-4 pilots scrambled to intercept Airwolf. Flying in an F-4 without an oxygen mask? 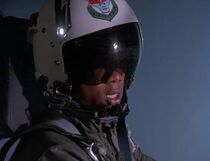 Freddie Dawson as the other pilot. His helmet says 13th Tactical Fighter Wing - a fictitious unit.