Once a Hero (episode)

Archangel appears in this episode but without any of his usual assistants. Caitlin is also absent throughout. Presumably she needed to manage the Santini Air business back in Van Nuys.

Through Archangel's contacts, Hawke buys some photos of scenes in a Laotian prison camp. He is convinced that a blurred, out-of-focus photo is that of his brother, Saint John, and he sets about planning a rescue, but is he merely seeing what he wants to see?

Firearms and other weapons seen 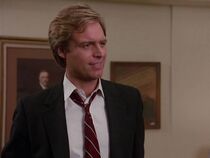 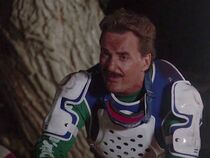 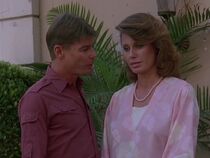 Cathy Shirrif as Charmaine Beaucaire, also known as Chin Mau, a French lady with local knowledge who Hawke needs on the misson as an expert guide. 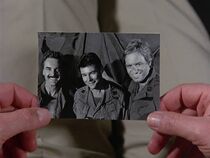 Hawke shows Dominic an old photo of Kearns, Wallace and himself. 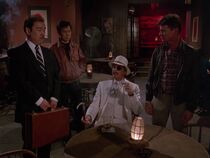 Benjamin Lum (left) with the attache case. He's here to sell some photos that Hawke might be interested in. Soon-Tek Oh next to him was Hawke's contact for this meeting. He didn't expect Archangel to be here as well. 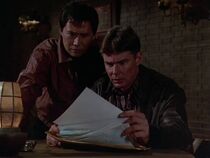 Soon-Tek On as Tommy studies the photos with Hawke. He was Hawke's initial contact and brings him to the meeting with Loo but his character is not developed much beyond this. 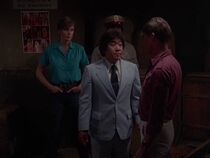 Eddie Wong as the government official (center, in the gray suit). He is demanding to inspect the crates in the warehouse which are filled with the weapons Hawke needs for the raid. 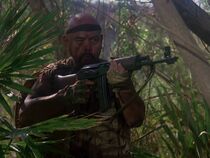 Richard Lee-Sung as a Laotian bandit leader. He is seen here with a Valmet M71S. He has just taken Hawke and his team prisoner. 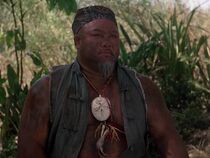 Professor Toru Tanaka, noted wrestler as the bandit king. He normally plays heavyweights on film and this appearance is no different. 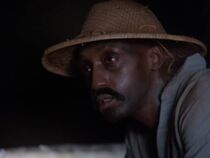 J. W. Smith as Roach, an M.I.A. prisoner whom Hawke and his team rescue. He tells Hawke some others had been taken away earlier on. 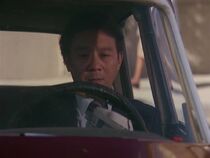 This uncredited actor mounts surveillance on Hawke's team in Bangkok. It is not clear who he works for. May be his boss is the customs official played by Eddie Wong.