Dominic Santini is hired by a movie producer to fly as a helicopter stunt pilot for a gold heist scene. Concerned for his friend's safety, Hawke tries to stop him from performing the dangerous stunt. Archangel learns that the stunt is actually a cover-up for a real gold robbery arranged by a criminal mastermind. [1][2]

Out on location, a film director, Simon Sayes is directing a shoot with his pilot Vinnie landing on top of a moving truck. It is too difficult and Vinnie crashes. He tells Simon it can't be done. Philip Maurice, who is a financial backer of the film, is not pleased. He tells Sayes to get the best pilot for the job. Sayes tells him that will be Santini Air but they are a lot more expensive.

Dominic tells Hawke about the job opportunity. It's worth a lot of money but Hawke is not enthused. It's too dangerous, he says. Dominic disregards the danger and goes to meet Sayes and Maurice anyway. He tells them he will fly the stunt himself, not Hawke. And he gives them a completion guarantee--if he doesn't pull off the stunt, they don't have to pay. Privately, Maurice is not convinced Dominic can pull it off and wants Sayes to contact Hawke secretly.

Meanwhile we see Maurice meeting up with a nervous man named Stoner. Whatever Stoner is doing, he is on Maurice's payroll. Stoner assures him he will get him the schedule he wants and he will ensure he is on duty on the day itself.

Hawke meets up with Maurice and Sayes but he refuses to undercut Dominic. But he recognises the risk to Dominic so he goes back to Santini Air and has it out with him. He will partner Dominic in the stunt. Dominic wants him to perform ground control but Hawke wants to fly the chopper. Dominic gets angry with this--does Hawke think he is too old to do the stunt? They part in disagreement.

Hawke contacts Archangel who is wondering what all the fuss is about. They think about various bureaucratic ways to stop the film that is, until Hawke mentions the name Philip Maurice. This stops Archangel cold. Maurice is a brilliant master criminal who can function totally without conscience. Despite his international crimes he has alway manages to stay beyond the reach of the law. For Archangel, this is also personal. Years back, Maurice offered a KGB decoder to the highest bidder. Archangel sent an agent Sonia to Berlin to bid on it. The KGB outbid and bought the machine back but Sonia disappeared. Archangel can't prove it but he has always believed that Maurice betrayed Sonia to the KGB. This movie that Maurice is making is just a front for something, and Archangel now has a chance to nail him.

Hawke thinks hard about this and finally goes to tell Sayes that he agrees to undercut Dominic and fly the stunt. Dominic finds out about this and of course isn't happy. He flies up to Hawke's cabin and wants to fight it out but Hawke evades his punches.

From the script that Hawke got from Sayes, it appears he has to land a helicopter with a raiding party onto a moving train, cut a hole in the roof, rescue a girl, then lift off. It sounds like a perfect set up for a train robbery. But there's a problem. Archangel can't use the FIRM's computers to find out more about the likely targets. He is sure that Maurice has a mole in the FIRM. He has another idea--he will send one of his operatives, Meryl.

Meryl chats Sayes up and after buttering him up about his talent, asks him to tell her more about the new film he is making. Meryl succeeds. Archangel and Hawke now learn that the shipment that Sayes is after is gold, and likely to be within a 500 mile radius of a position Hawke knows. Moreover, Hawke has a 4.00 am call. This narrows the possibility to a 2:09 train out of Bakersfield. Meanwhile Sayes also dropped the name Stoner. He might be an inside man on one of the trains, or a dispatcher. She would check him out. Meryl also wants to call in air surveillance and a strike team but Archangel says no. Maurice has moles and he will hear about it. Hawke has his own idea of who can be his back up.

Hawke visits the Santini Air hangar to find Dominic hard at work fixing a problem with a helicopter. He wants Dominic to be back up for the stunt. Dominic is not pleased. He is not going to follow Hawke around in some fuel truck. No, not a fuel truck. Hawke wants him to fly backup in Airwolf.

Right on schedule, Hawke lifts off with Maurice, Sayes and their men, all dressed up like a raiding party with assault rifles and submachine guns. Over at Hawke's cabin, Meryl suggests that she and Archangel could fly back up themselves. No, Archangel says. Hawke is risking his only friend for the mission and so they must let him play it his way.

Up in the way, Hawke spots a few trains and ask which one it is, but Maurice laughs and pulls out a gun and orders him to turn south. There is a truck on the road, that's his target.

Meanwhile, in the office of the trucking company, we finally see that Stoner is a dispatcher. He calls the truck and tells them their speedometer seems to be faulty and giving a slow speed alarm. He tells the truck to speed up to 60 mph and hold it steady for a while.

Dominic has lifted off in Airwolf but can't find Hawke near the train they thought he was hitting. Meryl's research now turns up the fact that Stoner doesn't work for a railroad. He's a dispatcher for Hi-desert Trucking. Dominic is at the wrong place. Can he get to there fast enough?

Over at the truck, Hawke succeeds in landing the chopper on the roof and Maurice's men hold up the vehicle. The gold bars are loaded onto the chopper. Hawke knows his life is in danger as he won't be needed any more so he seizes the opportunity to jump off the moving truck.

Vinnie is confident he can fly the chopper off so Maurice decides to load up his chopper with all the gold he can carry. He abandons his accomplices Sayes and Miller so that he can carry 10 more bars and orders Vinnie to lift off.

Meanwhile, Dominic picks Hawke up and they light the turbos in pursuit. It doesn't take long for them to catch up. After a demonstration of Airwolf's capabilities, Vinnie has had enough and puts the chopper down. Hawke refrains from shooting at Vinnie and Maurice. Instead he fires a rocket and blows up their chopper, leaving them stranded in the desert. Hawke tells Archangel to collect them. He and Dominic only gift wrap, they don't deliver.

Back at Hawke's cabin, our two friends are relaxing sawing wood together but Hawke want's a break. He says Dominic has always been younger than him. 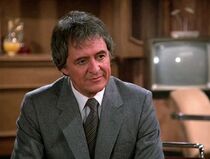 Henry Darrow as Philip Maurice, the master criminal who has evaded every attempt by the authorities to pull him in. 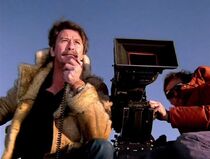 Paul Carr as Simon Sayes, hired by Maurice and given a chance to get rich 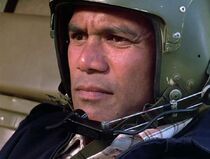 David Cadiente as Vinnie, one of the best stunt helicopter pilots according to Sayes. But Maurice wants the best. 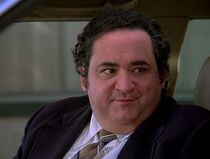 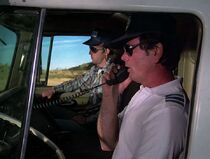 The truck driver in white has a line or two speaking to Stoner on the radio and he is played by Gary McLarty. The other one is not credited. 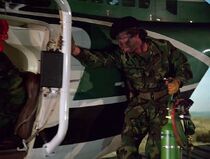 This is another of Maurice's accomplices. He is addressed as "Miller" but is not credited.