Prisoner of Yesterday was the 27th episode of Airwolf and the 16th episode of Season 2. The episode first aired on 2/9/1985.

While on a fishing trip with String, "Doc" Gifford, last seen in Inn at the End of the Road (episode), is kidnapped by an old flame, Teresa Guzman, to treat her father, the ex-president of a South American country. String, Dominic and Caitlin try to free "Doc" but they must be careful not to take sides in the civil war.[1] 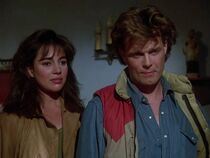 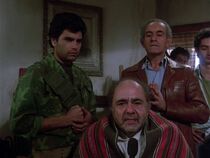 Marius Guzman, seen here just after he records his "farewell" speech. It doesn't sound like a farewell, says Teresa, suspiciously. 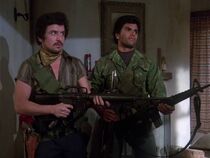 Luis (left) and Emilio, two of Teresa's revolutionaries seen here with their M-16s. Emilio has just seized "Doc's" M1 Garand and is holding it in his right hand. 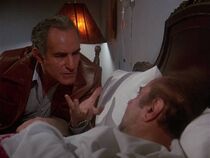 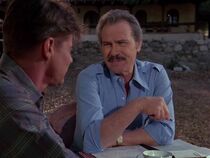 H. M. Wynant as Hoffman, the U.S. Ambassador, warning Hawke and friends not to take sides. 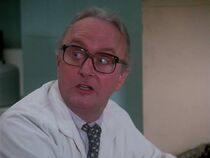 Is this John Furlong? He plays Dr. Jensen, the quack who supplies Guzman with some radioactive serum. Hoffman pronounces the name as "Hansen" but the credits list it clearly as "Jensen". The sign on his clinic says "Danner" Emergency Clinic??? 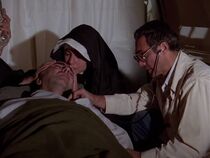 There is another "doctor" played by Joe Dellasorte. Is this him? He has a few lines in the ambulance just after Teresa springs Guzman from hospital. 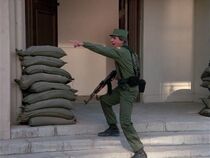 Many soldiers in the show but only one is credited (to Jim Malinda). This could be him as he has the most lines. 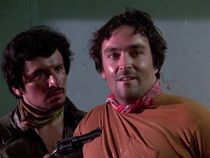 Garrett Pearson as the radio operator. Teresa addresses him as "Manuel". 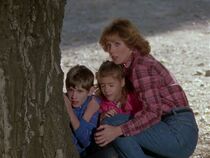 The ambassador's children seen here with Caitlin. They have a lot of scripted interaction but no lines and are not credited. 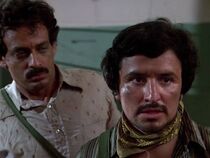 This revolutionary in the white shirt appears in a number of scenes. He is there at the abduction of "Doc", and again when Luis tells Teresa that Emilio is dead. He has a line or two but is uncredited.