Proof Through the Night

Proof Through The Night was the fourth episode of Season 1. The episode first aired on 2/11/1984.[1] This is still early in the series and a lot of screen time is spent introducing the audience to background details: Airwolf's capabilities, the Wolf's Lair, and the F.I.R.M. headquarters (whose codename "Knightsbridge" is mentioned for the first time). Time is also spent developing the relationship between Archangel and Marella. Archangel's real name is mentioned in full for the first time, by Marella.

Archangel sends Hawke and Santini to extract a F.I.R.M agent from the Soviet Union. The agent has obtained something so urgent and vital that he has deemed it necessary to blow his cover after 22 years: a deadly neurotoxin developed by Russian scientists. The mission is complicated by the fact that Airwolf's must fly without its weapons in order to carry the fuel needed to cover the requisite distance with the "extra weight" of the agent and his family. To make things worse, the agent's wife and daughter refuse to leave.

The scene opens in a Russian chemical warfare lab where tests are being carried out with a deadly new nerve agent serum. Rostoff, apparently one of the scientists there, steals a bottle of the serum and then releases the contents of another bottle, killing everyone in a staged accident.

Over at Hawke's cabin, Archangel and Marella persuade Hawke to take on a difficult mission. He needs to extract one of their deep cover agents, Rostoff, codenamed Moses. The problem is that he is in Sverdlovsk, so far away that, even with in-flight refuelling, he needs to remove Airwolf's weapons in order to make room for the extra fuel and the space to carry Rostoff and his family. Going without weapons? But Marella tells Hawke that Rostoff is no ordinary agent. On his first mission, he had saved the life of one Michael Coldsmith Briggs III, codenamed Archangel. Hawke agrees to go, although all of them are mindful that this might be a trap. Marella's computer tells her Hawke only has a 50-50 chance.

The ingress is carried out smoothly and Hawke meets up with Rostoff at Sverlovsk. But there's a complication. To protect his family, in case the KGB came after him, Rostoff had sent his wife and daughter to Kirivitz, 200 km to the east. To ensure they won't be left behind, Rostoff has given the bottle of serum to his wife.

So Hawke has on choice. Airwolf heads for Kirivitz. Approaching it, Dominic notices missile silos around the village. Is it a trap? Could Rostoff be lying? Worse, Hawke notices soldiers inside the house with Rostoff's family. They are just militia, Rostoff reassures them. His brother in law, Turgyev is in the local militia.

The other militia men leave and Rostoff shows himself to his family Turgyev greets Rostoff warmly but soon the welcome turns sour. Turgyev is upset that Rostoff is an American spy, and that his own sister and Rostoff's wife Natalya has been lying to him all the while Worse, Rostoff's daughter Tanya refuses to betray Russia and will not come along.

Further argument is cut short by the arrival of a Russian helicopter gunship. It rakes the house with machine gun fire but Hawke notices it is firing high--obviously to pin them down until ground support arrives at dawn.

Over at Knightsbridge, Marella and Archangel reflect on the real possibility that Hawke has failed. Earlier, Marella had reported an increase of KGB traffic at Sverdlovsk. So the Russians now knew that that the accident was no accident. They would shortly be after Rostoff at Kiritvitz. Now day was breaking over the area. Hawke had already missed his rendezvous with a tanker. According to Marella, the odds are now 1000-1 against Hawke succeeding. Archangel agrees but notes there's one thing going for them: Hawke doesn't know these odds.

Over at the house, Rostoff and Dominic see ground troops approaching in trucks. Looks like its all over. But not yet. Hawke has gone to fetch Airwolf. He charges at the Russian gunship and deliberately misses it narrowly, igniting his turbos at the last moment. The near miss and the blast of the turbos throws the gunship off, possibly damaging it. It crashes into the ground and explodes. Hawke then charges at a truck and lights his turbo just over it and pushes it over.

With the opposition disrupted, Dominic, Rostoff, his wife and daughter are able to board Airwolf undisturbed. Rostoff waves at Turgyev but Turgyev, still bitter at the betrayal, does not respond.

At Knightsbridge, Marella delivers the news that Airwolf has just been reporting hooking up with a tanker. She lets out a whoop of delight. Archangel tells her to control herself--she's behaving like a raw recruit. Then he himself lets out a whoop.

Everyone gathers for a celebratory dinner at Hawke's cabin. Marella, in particular, wants to hear stories from Rostoff about Archangel when he was young. Tanya is not enjoying the occasion and excuses herself to go outside.

Hawke follows her with his cello. Tanya tells him she intends to go back to Russia. She cannot leave her own country. Hawke says she will be free to do so. But perhaps she might come to see some things to like about America. There's the music, art, fast food.... but most of all, the freedom to accept or reject its culture, its way of life, its politics as one pleases.

Hawke plays a plaintive Russian song "Polyushko-polye" and Tanya sings along. Over in Russia, we see Turgyev singing the same song with his balalaika. 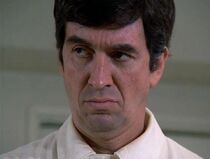 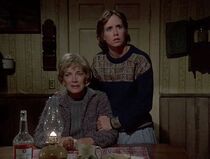 Linda Grovenor as daughter Tanya (standing). She has front billing with Rick Lenz and Deborah Pratt. Seated is Maria Korda as the wife Natalya. 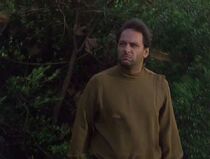 Radu Gavor as Ivan Turgyev, brother-in-law of Vladimir. He is upset to discover that Vladimir has been an American spy. 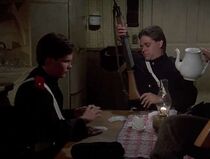 Hawke spots two militia men at Ivan's house and suspects a trap. The one with the rifle is credited as "1st Russian soldier", played by Scott Turchin. 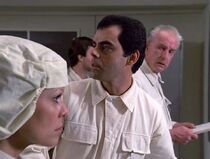 This is probably Eric Goldner. There is a credit for technician. This is the only one who has a speaking part in the scene. He manages a "Nyet!" when he spots Vladimir opening the tube of neurotoxin. 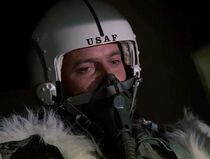 Cris Capen plays the pilot of the KC-135. He is addressed as "Captain Nuzo" by his crew. Unfortunately the producers opted for realism. All the crew are only ever seen with their oxygen masks on. 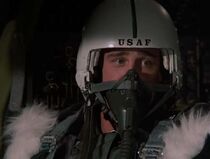 Greg Winfied as the tanker co-pilot. 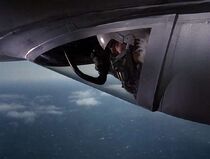 Rick Garia as Sgt. Tembrusco, the crew chief/boom operater of the KC-135 tanker. 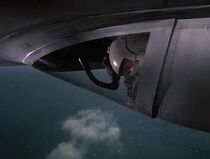 Sam Kwasman as Cpl. Munga, the replacement crew chief when Tembrusco asked to be excused from the second flight. He is called "Airman" by the pilot but he is billed as Cpl. Munga. 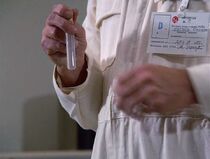 A view of the security pass which Moses is wearing. Those who know Russian can try to translate it for us. 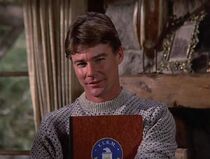 This cover of the official dossier Marella has passed Hawke shows the F.I.R.M. logo. It also tells us that F.I.R.M. is a proper abbreviation and not a nickname.
Add a photo to this gallery

Retrieved from "https://airwolf.fandom.com/wiki/Proof_Through_the_Night_(episode)?oldid=9659"
Community content is available under CC-BY-SA unless otherwise noted.