At this point, Caitlin is being checked out by Dominic as pilot on Airwolf but he insists she is not going to fly as a regular member of the crew unless something happens to him or Hawke. "What qualifies as something happening to you or String?" she asks. She gets her chance at the end of the episode.

Santini Air takes on a job Dominic doesn't really want: helping Sam Kowal do an aerial survey of a desert area. They accidentally overfly the isolated desert resort of George Dent. Former mobster Kenneth Langhorn has emerged from hiding and is staying there. He spots the chopper and camera and is determined to retrieve the film, thus setting off a string of killings and violence which the police is inclined to regard as random. Hawke decides that the violence is not random and sets out to track down the source with Airwolf.

Caitlin as being checked out as a pilot on Airwolf. Dominic, who is flying with her tells her she is doing fine but she is not going to become a regular member of the crew--they only want her trained in case something happens to one of them. She asks, "What qualifies as something happening to you or Hawke?"

Meanwhile, over another part of the desert, rock collector Annie is collecting specimens for her rock shop when she sees two Hughes 500 choppers and a Beechcraft King Air land on a remote desert airstrip. Curious, she drives over in her jeep. It turns out that crime boss Kenneth Langhorn is emerging from hiding for a rendezvous of mob chiefs at the desert resort of George Dent. Langhorn is not pleased about being spotted by Annie and he sends his armed choppers to blow her and her jeep up with rockets.

Over at Van Nuys, Sam Kowal persuades Dominic and Hawke to help fly a photo survey mission for him. Dominic is reluctant but Hawke agrees because Kowal has a date with a girl (played by Kari Lloyd) and Hawke feels "a man needs some recreation".

The photo mission is routine--just stock footage of desert scenes, but then Dominic and Hawke overfly George Dent's desert resort. Dominic shoots some scenes of the luxurious surroundings, complete with swimming pool and models in swimsuits. Langhorn spots the chopper and angrily orders his hitmen to locate and seize the film.

There follows a string of violent attacks--Kowal's hangar is ransacked and Kowal is killed. Caitlin is hit on the head inside the Santini Air hangar and the film processing lab is burnt down. Det. Sgt. Anne Brennan, in charge of the case, thinks these are all random acts of violence, probably by junkies. Hawke is not so sure, especially as Caitlin overhead some talk about "a film". Fortunately a delivery man brings the film which Dominic and Hawke shot. They view the film with Brennan but don't find anything significant.

After the film viewing, Brennan invites Hawke for breakfast. Along the way, they get better acquainted and even grow to like each other as they find out that they both had fathers who died when they were very young. They spot a group of police vehicles--the wreck of Annie's car has been found. Hawke tells Brennan the car was hit by rocket fire but Brennan still refuses to believe there is a connection.

Coming back to Van Nuys, Hawke discovers the Santini Air hangar on fire! The film is destroyed. For him, this is enough. He and Dominic take out Airwolf and retrace the flight path of their photo survey but this time using Airwolf's powerful spy cameras and they spot the connection--they see Kenneth Langhorn sitting by the swimming pool. Hawke calls Brennan, who says she's got to tell her captain because this is big news.

Brennan arranges a meeting with Hawke out in the desert--for security reasons, but Hawke notices she is trembling and cold. A car turns up and turns out to be Langhorn's hitmen! Brennan has been in Langhorn's pay all along! She tells the hitmen that the deal is they take the film while she holds up Hawke until he can no longer interfere with the mob meeting. But the hitmen say that Langhorn has changed his mind and wave her aside. Hawke takes advantage of this slight distraction and decks both hitmen, shoves Brennan into her car and take off. The hitmen get up and give chase.

Hawke calls Dominic on the radio. Brennan now realises that Hawke had suspected her all along--ever since the fire at Santini Air after the film viewing, he had just be praying he had been wrong. The hitmen are shooting at them so Brennan returns fire but is fatally hit. Just in time, Airwolf with Dominic and Caitlin on board charges in and destroys the hitmen with rockets. Brennan knows she is dying. She tells Hawke that Langhorn plans to leave the country by air that very day. She says sorry to Hawke, because things could have been very different, and dies in his arms.

Meanwhile the mob bosses at Dent's resort have been cutting deals, dividing up the rackets in the country among them. But mob bosses such as Leon don't think they need Langhorn. They want to own all the rackets, but Langhorn can run them on their behalf. Langhorn pretends to agree and then signals to his hitmen to shoot everyone on the spot.

Airwolf overflies Dent's mansion. "it's the St. Valentine's Day massacre all over again," says Dominic. Realising that Langhorn must be heading for his King Air at the desert air strip, they set off in pursuit.

Langhorn orders his two escorting Hughes gunships to cover him but they prove no match for Airwolf and are shot out of the sky. Langhorn reaches his King Air but then his bag of money falls open. Instead of escaping, and pathetically tries to gather up all the notes on the ground. Airwolf has despatched all the hitmen and now descends to stir up all the notes with its rotorwash while Langhorn frantically grabs for them. Meanwhile a fleet of police cars arrive and take Langhorn into custody.

Back at the cabin, Caitlin asks Hawke what he told the investigators about Brennan. He tells her he said she was conducting surveillance on Langhorn, all by the book. Caitlin tells him he is a good guy. "Don't let on," he replies. 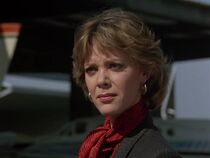 Anne Lockhart as Det. Sgt. Anne Brennan, who thinks all the violent events are random and unconnected, but in truth, she's working for a main villain, Kenneth Langhorn. 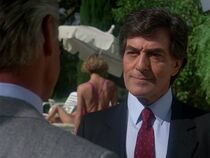 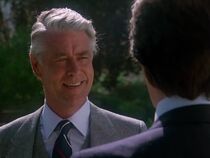 Lou Felder as George Dent, who hosts the mob meeting in his desert resort. Supposedly a former congressman and attorney but this is not mentioned in the dialogue. 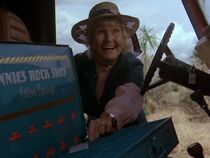 Eve McVeagh as Annie, the rock collector who sees too much. 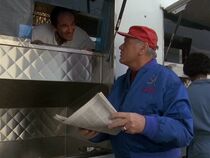 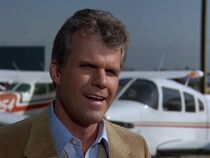 James Ingersoll as Sam Kowal, owner of a rival helicopter company who persuades Dominic and Hawke to do a job fo him. 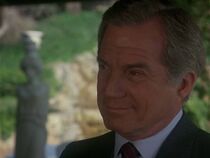 Johnny Haymer as Leon, a mobster. 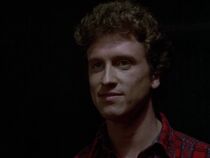 Roger Rose as the delivery boy. He delivers a reel of film to Dominic and Hawke and tells them that the film lab has been torched. 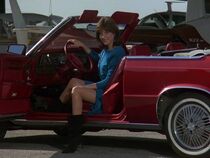 Kowal's date. This is probably Kari Lloyd, billed as "model" although there is no mention of her as a model. There are many models at the Dent resort but they don't have speaking parts. 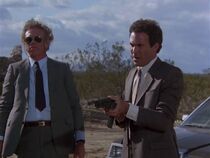 A pair of Langhorn hitmen. Stark (Dean Wein) on the right with gun. Tony Epper (left) is not credited but is listed in the Airwolf Series Guide as Rayco. He has quite a few lines in the episode. 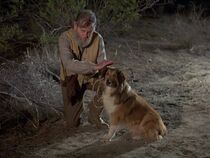 Uncredited appearance by Roberts Blossom. His dog finds the wreck of Annie's car while out jackrabbiting. 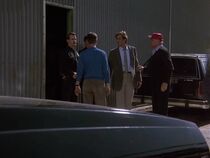 The officer between Hawke and Dominic has a few lines. Could he be Timothy J. Cutt? 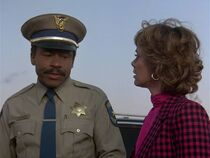 Brennan addresses this officer as "Charlie". He has many lines. Could he be Timothy J. Cutt? 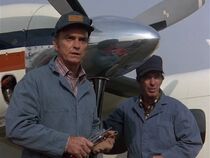 This mechanic in front spots the fire at Santini Air. He has a brief line but is not credited. His identity is unknown.