Rayco is a hitman working for crime boss Kenneth Langhorn who makes a one time appearance in the Season 2 episode titled "Random Target".

Rayco is one of several hitmen working for crime boss Kenneth Langhorn. He acts like the personal bodyguard of the boss. He goes everywhere his boss goes. For example, he arrives at the remote desert airstrip by chopper to secure the ground for before his boss lands in his light aircraft. Later, Rayco and his partner Stark are assigned to the difficult mission of recovering the film taken by Hawke and Dominic's chopper when they overfly Langhorn's desert hideout.

Compared to his partner, Rayco plays the silent and strong type. He doesn't speak much and prefers to talk with his fists. When the pair are questioning Sam Kowal as to the whereabouts of the film, Rayco hits Sam so hard that he kills him. His partner, Stark, is highly annoyed because they need Sam alive to question him. "What the hell did you do?" Stark asks in anger. "I hit him," is all Rayco says. Later Rayco knocks Caitlin out in the Santini Air Hangar the first time he sees her. He doesn't even wait to see if he can restrain her and make her talk. "Did you kill her too," asks Stark sarcastically.

They fail to get the film but manage to set fire to the Santini Air Hangar, destroying the film inside. Later, when Det. Sergeant Anne Brannen takes Hawke out into the desert for a meeting, Kenneth Langhorn sends Rayco and Stark to execute him. However Hawke manages to knock the two of them down and make his escape in Brannen's car, dragging the detective along. Rayco and Stark pursue in their car. But Hawke had anticipated treachery and Airwolf, flown by Dominic and Caitlin, has been waiting nearby. It intervenes and blows up Rayco and Stark's car with a missile.

Rayco is played by stuntman Tony Epper[1]. He has a few lines in this episode but is not credited. His name and that of the character is listed in the Airwolf Series Guide,[2] although not in IMDB. Epper makes a few other uncredited appearances in the Airwolf series such as in The Horn of Plenty (episode). He does pick up one credit in Season 3 Annie Oakley (episode). 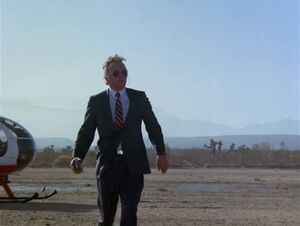 Rayco arriving by chopper at the airstrip to prepare for his boss. 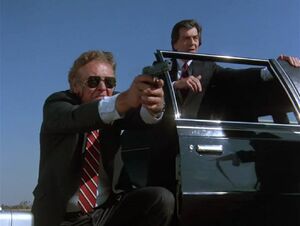 Rayco shooting at Annie after she stumbles onto the landing strip. He is using a Browning M1911A1. Langhorn is to his left. 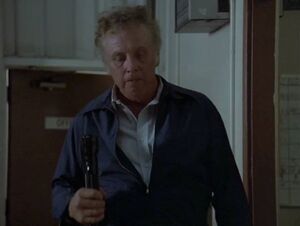 Rayco after knocking out Caitlin.