American
Samantha is the name of an aide to Archangel who makes two appearances in Season 3, during the episodes Half-Pint (episode) and Discovery (episode).

Samantha first appears in Half-Pint (episode). Coldly efficient, and with piercing blue eyes, she doesn't get many lines to speak but she does exhibit that Radar-like characteristic of always being able to know what her boss wants before he asks for it. So when Archangel calls for her, she is right there behind him. When he asks for a file, she has it right in her hands.

Samantha appears a second time in Discovery. Here she gets plenty of action. She helps look after Grace Harrison at the FIRM safehouse, drives Archangel around in his limo and even takes part in the firefight at San Pedro, one of very few times we see an Archangel aide handling a weapon in combat. However her expertise at operating computers tended to be upstaged by Caitlin, who does most of this for Archangel in this episode. 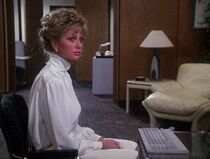 Like most Archangel aides, Samantha excels at pulling data from the computers. 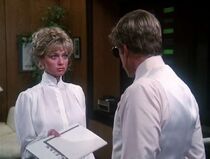 Like Radar in "MASH", Samantha knows what her boss wants even before he asks for it. Here she is ready with a file. 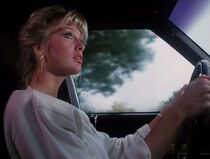 Slightly more casually dressed and with her hair down, she is driving Archangel and Hawke in the limousine. 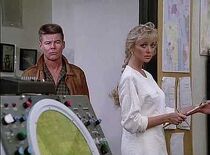 Samantha in the FIRM's ops room in Discovery. 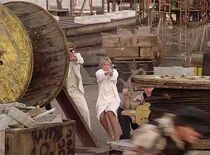 Nice to see Samantha taking active part in a firefight. 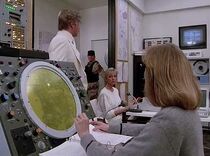 You would normally expected to see Archangel aides operating the computers and radars. In this case, Smanatha is upstaged by Caitlin. May be because otherwise the location of the Wolf's Lair would be compromised.

Samantha is played by Christie Claridge.[1]