Dominic uses Airwolf to rescue the president of a multinational corporation and even gets him to an important board meeting on time. The millionaire is impressed by Dom's frankness and integrity. Later, when the millionaire is believed to have died, he leaves a large part of his estate to Dom. But that is only the start of his troubles because some people don't agree.[1]

Hawke has the flu so Dominic is flying Airwolf on a mercy mission, delivering a human heart for an emergency transplant from Point Discovery in Alaska to Chicago. On the way, he spots a crashed Learjet and lands to pick up the survivor. It turns out to be Carl Barron, president of Barron Technology Services and one of the richest men in the world. Barron offers Dominic $50,000 to change his flight plan and take him to Los Angeles where he has an important board meeting but Dominic refuses. "It's a matter of priorities," Dominic says. Nonetheless, using turbos, Dominic delivers the heart and still gets Barron to LA in time. Barron says money is the grease that makes the world go round. "Except that money sometimes gets in people's waty," Dominic replies.

Sometime later, an explosion takes place in one of Barron's labs with Barron in it. Dominic and Hawke attend Barron's funeral where Charles Selkirk, Barron's attorney reads out Barron's latest will. He has a surprise: 60% of his estate is left to his granddaughter Margo Brewster but 40% will go to Dominic!

Some people aren't happy about it. First Archangel gets trouble from Senator Younger because Barron's will mentions how he was rescued by a secret advanced helicopter. The senator who chairs a senate committee wants to hear all about it.

Then there's James Graydon. He is Barron's chief executive officer and has been romancing Margo Brewster in order to consolidate his hold on the company. For him 60% is not enough, he wants it all. He offers Dominic $500,000 if he will not say anything when they contest the will. But Dominic doesn't like being bought and he says he will see Graydon in the boardroom. Graydon walks away and looks to his hatchet man, Cooper, telling him, "I'll see him in hell first!"

Cooper makes his move the next day at the movie studio where Dominic has a flight gig. While Dominic is airborne with a movie director, Cooper explodes a charge on the chopper which snaps the control rod of the tail rotor, forcing Dominic to make a dangerous crash landing. "I better get a will of my own," Dominic tells Hawke. He returns to Santini Air to find that the court has dismissed the challenge to the will. Dominic will have to get used to being rich, and on the board of Barron Technologies. He spends the night reading up the reports for the meeting.

Graydon is worried. Just before the board meeting, he tells Margo that Santini "is dangerous" and wants to shake up the company. He asks Margo to give him her proxy vote. Margo is uncertain but agrees.

The meeting begins, and Dominic proves that he is no pushover. He questions Graydon's report. The company has been ripping off the U.S. Air Force, selling sensors which cost $160 for 16,000, and buying up land, forcing smallholders off their farms. Graydon angrily tells Dominic he is not giving answers to a "throttle jockey". The report stands approved and Dominic is outvoted. "No he is not!" says Margo. Graydon probably underestimates Margo because she is a pre-school teacher and he thought she knew nothing about the company. But She doesn't like what she just heard and she withdraws her proxy. Leaving the boardroom, she invites Dominic for a private talk.

Margo tells Dominic she was never close to her grandfather. They had pulled apart after the death of her parents 10 years before. She can't understand why he left her the company. She just can't handle it. But Dominic is not so sure--he had just seen her in action. Every company needs someone at the top with the human touch. He thinks she can make it work. She has "Barron blood" in her, he says. Maybe Barron knew that. Dominic tells Margo he has wondered why Barron included him in his will and now he thinks he understands: it is so that he could have this talk with her.

That evening Margo gets a call--apparently Dominic wants to meet her in the parking lot. She goes down and boards a Jetranger in Santini Air colors. But it isn't Dominic! Cooper has been watching her and calls Graydon, who hurries to Santini Air. Dominic shows them his damaged Jetranger. It couldn't have been him. Caitlin suggests that they see Angelo across the runway. He runs the shop which does Dominic's paint jobs.

Angelo tells them he did do a paint job in Santini colors for a cash customer. From a photo, he identifies the customer as Carl Barron! Graydon tells Domininc if Barron is still alive, he "doesn't get it." Then he corrects himself: "You don't get it either way!" He calls Cooper who draws a gun. Hawke, Dominic and Angelo are locked into a spray paint booth. Cooper releases paint thinner spray into the booth and rigs the door so that there will be a spark when opened and blow the whole place up.

But Caitlin has been watching and knows something is wrong when she sees Cooper and Graydon leave without Hawke and Dominic. She rushes over, disables the spark hazard, turns off the spray and opens the door. Hawke and Dominic rush off to fetch Airwolf. They know Graydon is going after Barron.

Graydon has assembled a flight of three armed Hughes gunships. He thinks he knows where Barron is hiding out: an old seismology lab in the desert. Nearing the place, he orders the choppers into assault formation.

Meanwhile, at the seismology lab, Margo is angry with Barron for playing with people's lives. Barron acknowledges her anger and tells her he never learned from his mistakes. Since her parents died, he had withdrawn from her when he ought to have gotten closer to her. When Dominic had rescued him, it made him realize his mistake but instead of learning, he had withdrawn again, running off to a remote mountain cabin in New Zealand. But he woke up saying her name and had to come back. Barron and Margo make up but there isn't much time. Graydon's choppers appear outside and Barron senses the danger. He grabs Margo and they duck out of the lab just before it is blown up by rockets.

The gunships pursue Barron and Margo on the ground. It looks hopeless but fortunately Airwolf arrives on the scene. It's three to one odds, Hawke tells Dominic, but not for long. Two of the Hughes are despatched in quick succession with missiles. But now Graydon's own chopper has Barron and Margo trapped in the gunsights. Airwolf pulls in behind. Too gentlemanly to fire unless he is shot at, Hawke tells Graydon and tells him to stand down. But Graydon isn't giving up. He warns Hawke to pull out or else he will shoot Barron and Margo. Reluctantly, Hawke pulls away. But once he is out of sight, he turns around, snaps on his turbos and charges in front of the Hughes just as it fires at Barron. The sudden rush forces the Hughes to swerve and fire at Airwolf instead. This is just what Hawke needs. Turning around, he fires another missile and blows Graydon and Cooper up.

A few days later, a crowd of reporters outside Barron headquarters wait for a large limo to pull up. First Dominic and Hawke steps out and then to their surprise, Margo and Barron. Barron tells the reporters that Margo will be running the day to day operations from here on. The reporters press him about what he had said about a super helicopter. Barron tells them there was no super helicopter. He had been delirious after the plane crash. It was just an ordinary chopper flown by an extraordinary man. Archangel is listening nearby and is delighted as now Senator Younger can get off his case.

Barron takes Dominic aside. Saving his life the second time meant losing 40 million dollars. Did he ever thought to look the other way? Dominic says no. "Keep looking in your mailbox. I won't live forever," Barron tells him. 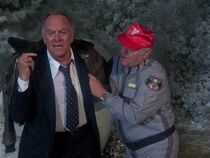 Carl Barron being rescued by Dominic. 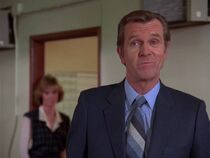 Charles Selkirk, Barron's attorney. He is at Santini Air to tell Dominic that Graydon's challenge to Barron's will has failed. 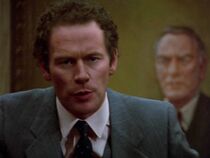 James Graydon. Somewhat like Mr Barron's No. 2. He is chairing a board meeting. Note the portrait of Carl Barron behind him. 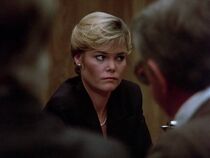 Margo Brewster, Barron's granddaughter, at the board meeting. Graydon underestimated her because he thought she was only a pre-school teacher. This nicely framed shot shows she can be firm and decisive--she has "Barron blood" in her, as Dominic says. 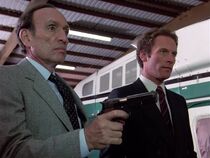 Cooper, Graydon's aide. Here he is threatening Hawke and Dominic with his M1911. 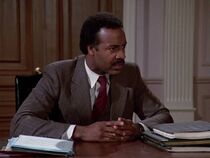 Senator Younger. In a side plot he gives Archangel a lot of heat because Dominic's flight exposed how fast Airwolf really is. 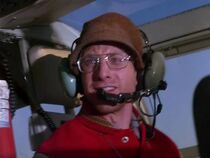 Film director in Dominic's helicopter. Here he is scared to death because a small charge has just blown the control rod off the tail rotor. 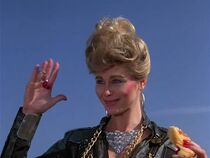 Dolores, an actress on the film set, trying to chat up the newly rich Dominic. She is offering him the "keys" to her "chains". 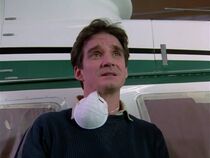 Angelo, who owns the paint shop at Van Nuys. 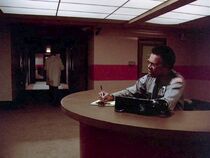 This security guard has a line or two. Barron addresses him as "George". Could he be Smitty? 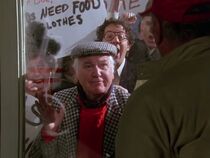 There is supposed to be a "Man #1". This is a possibility. Among the crowd outside Santini Air asking for money, this man wants Dominic to invest in his plan to turn water into gasoline.