Severance Pay was the 31st episode of Airwolf and the 20th episode of Season 2. The episode first aired on 3/23/1985. Marella makes a return after a long break and we get to meet Zeus a second time. Caitlin, however, doesn't appear in this episode at all.

Larry Mason and Joe Klein, two employees of the F.I.R.M. are denied their retirement benefits because of a technicality. Klein becomes so agitated by this that he dies of a heart attack. Mason, who is Hawke's friend, goes on the run and threatens to divulge sensitive information unless the retirement benefits are restored to him and Klein's widow. Mason is declared a "Mad Dog" (a threat to national security) and Hawke must find him before he gets "terminated". This is made all the more difficult because, as Mason has discovered, there is a high level mole in the F.I.R.M.

Larry Mason, a "reader" (intelligence analyst) at the F.I.R.M. finds evidence that Soviet intelligence may be aware that Airwolf is still intact and worse, there are signs that a high-level mole is inside the FIRM. He reports this to FIRM director of security, Arthur Barnes and also to his friend Hawke, warning him and Dominic to be careful. However someone else will have to deal with the mole, as Mason is retiring along with his colleague Joe Klein and they are all excited about getting their beachfront business in Mexico going.

But there's a problem. Mason and Klein discover that as they are categorized as "temporary employees" and are not entitled to a retirement bonus. Klein, distraught about this, collapses and dies from a heart attack. That night, Mason blows up a computer at the records office and goes on the run. He gives Archangel an ultimatum: restore the bonus checks to himself and Klein's widow within 48 hours or he will leak classified information to the press. Hawke asks for 48 hours to bring Mason in and the FIRM committee agrees.

Hawke makes contact with Mason and persuades him to meet Archangel who has promised to fix things. But on the way with Hawke to the meeting, Mason spots Henderson, Barnes' aide tailing him. Mason evades the surveillance but pushes Hawke out of his truck. Hawke swears he didn't set Mason up but Mason says he needs time to think.

Back at the FIRM, Barnes insists to Archangel and Hawke that Henderson has been acting without orders, and even suggests that he is the mole. As they are talking, Marella switches on the TV and they watch a bulletin by the reporter Carling Morgan with the first of Maosn's leaks. As Mason promised Hawke, it's an embarrassing leak (which sounds like the events of Mad Over Miami (episode)) but doesn't get anyone hurt. Barnes thinks Mason is getting out of control but Hawke insists he still has 37 hours.

There follows a strange scene where someone trieds to kill Hawke but spilling fuel into the hanger floor while he is doing some welding. It is not clear who is doing this or how it fits the plot. Hawke discovers the danger just in time.

The next morning Marella tearfully tells Hawke Mason has gone too far. There's been another leak and this has resulted in several FIRM agents in Europe killed, including people Marella knew personally. Mason calls Hawke and insists he didn't do it. Hawke needs to clear his friend but doesn't have much time. The FIRM committee declares Mason a "Mad Dog" and votes to terminate him.

Hawke approaches Carling Morgan. At first she refuses to help him but agrees to show Hawke the transcripts of the classified information given to her after Hawke convinces her that all he wants to do is clear Mason. Hawke meets Archangel, Marella and Barnes. He shows them the transcripts: the styles of the two reports are different, proving that Mason couldn't have written the second, damaging one. Mason (in a move pre-arranged by Hawke) calls up and speaks to Archangel. Archangel convinces him to come in. Learning that Mason is in Tampico, Mexico, Marella suggests picking him up from a nearby airstrip at Los Hermanos and she and Archangel depart for the rendezvous in a Learjet.

Hawke is still troubled. Something doesn't feel right. He calls Carling again and asks if she had anything else. She tells him that the second report used the word "chifforobe" but they had to change the word in their broadcast because no one understood what that was. Apparently "chifforobe" was a word used in the South to mean wardrobe. How Hawke makes the connection from this to the real mole--Barnes--is not clear. Perhaps Barnes had a southern accent? (Note: Milner who played Barnes comes from Detroit).

Hawke and Dominic hurriedly lift off in Airwolf to cover the Learjet. Just as well. Barnes has arranged for a P-51 piloted by a Mexican mercenary to attack the Learjet but Airwolf intervenes in time.

Over at the FIRM board room, Barnes, not knowing what happened, pretends to play the hero and offers to resign for causing the "death" of Archangel and Marella. But Hawke and friends turn up at the meeting to denounce Barnes, armed with a confession from the P-51 pilot who Airwolf had shot down. Barnes is placed under arrest. He tells the committee that he will patiently wait for the next prisoner exchange, but Archangel tells him: "We don't exchange what we terminate."

Archangel offers Mason re-employment in a senior position in the FIRM, but Mason thinks Klein would have liked him to go on and set up and run the marina they had planned. Is he turning the FIRM down? No, he will think about it. 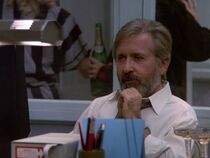 Larry Mason, still at work with just a few minutes before his retirement. 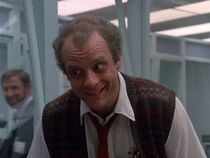 Joe Klein at his retirement party 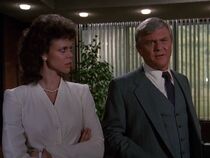 Barnes, director of security in the FIRM, seen here with Marella. 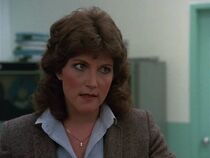 Lynn Adele plays this unnamed records clerk. Her computer can't process the payments of the retirement benefits for Mason and Klein, leading Klein to have a heart attack. 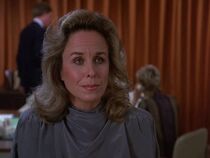 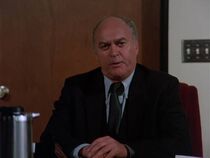 Zeus, his second appearance in the series. He is chairing a committee meeting of the FIRM. 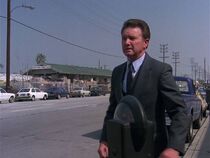 Barnes' aide, Henderson is named in the show dialogue and appears in two scenes but has no lines. He is played by an uncredited actor. 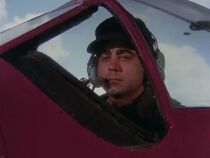 Mexican mercenary employed by the Soviet embassy in Mexico. There are several close-up scenes of him in the P51 cockpit but he has no lines and is uncredited, 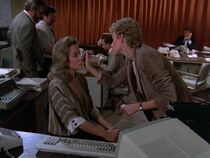 There is supposed to be a "gopher" played by Mary Rings. This person applying makeup to Carling Morgan is the only person doing any gopher role anywhere. But she has no lines.