Sins of The Past (episode)

Sins of The Past

Hawke and Dominic divert Airwolf on their way to a F.I.R.M. mission so that Dominic can attend the funeral of his daughter whom he has not seen since she was seven. His ex-wife, Lila creates a scene at the funeral and angers Dominic to the point of almost striking her. On his return from the mission, Dominic is arrested as a suspect for the murder of his ex-wife Lila. Hawke must find the true killer to free his friend.[1]

Dominic is distraught when he hears of the death of his daughter, Sally Anne, found at the beach on the island of St. Remo. Dominic's ex-wife Lila had taken took Sally Anne away many years ago when they separated. Dominic had left St. Remo and has not seen Sally Anne since she was seven. Now in her mid-twenties, he won't see her at her funeral either.

But Hawke thinks he can. They have a F.I.R.M. mission to perform, somewhere at the North Pole but Hawke diverts Airwolf so that they can stop by St. Remo on the way. They meet up with Dominic's old friend Aaron Martin and attend the funeral together. There, Lila, obviously drunk, makes a scene and infuriates Dominic when she suggests that he can't even be sure she was his daughter. Dominic grabs her in anger and Hawke and Aaron can barely restrain him.

Coming back from the recce mission over the North Pole, Lieutenant Grodin is waiting at Santini Air and arrests Dominic on suspicion of murdering his ex-wife. Dominic, of course, has a rock solid alibi, but the mission is too secret and Archangel refuses to supply it.

Hawke is compelled to fly back to the island to look for clues. He goes first to the crime scene where he is jumped by Captain Babbitt. Babbitt tells Hawke that as far as the police is concerned, they already have their man but Hawke persists in asking about other possible suspects. Babbitt tells him that "different kinds of elements" have been coming to the island since a large casino owned by Jason Darius went up. The casino is highly unpopular with the local islanders. But Babbitt says, "It's the price we pay for ... growth ... prosperity ... better way of life...."

Hawke looks up Vince Decter, a tennis pro whom he had seen with Lila at the funeral. Decter tells him Lila was "loaded' and seemed to have more money than she knew what to do with. They had a business arrangement to buy over a tennis club but she cut him out.

Hawke and Aaron visit an old house which Dominic had maintained all these years just in case Sally Anne came back to him. Sally Anne had apparently lived there for the last few weeks before she died. Aaron tells Hawke she was in with the casino crowd. Watching some old movies, Hawke notices another woman he saw at the funeral--Beatric Maretti, Lila's best friend. That night, an intruder breaks into the house but flees when Hawke and Aaron discover him. What can he be after, they wonder.

The next day, Hawke looks up Beatrice Maretti. Beatrice tells Hawke that Lila had always loves attention and moeny and used people to get it. Towards the end she had been getting desparate and probably used Sally Anne to bait the men she wanted. The conversation is interrupted when two of Jason Darius' hitmen turn up to bring Hawke to see their boss.

What Darius tells Hawke contradicts Decter. Darius had a relationship with Lila but that was ancient history. Lila had no money he says and she wasn't the one supporting Vince. Lila and Vince were two losers in search of a handout. Darius tells Hawke to lay off the investigation.

Leaving the scene, Aaron calls Hawke and tells him to meet him at Dominic's house where Sally Anne was staying at. He has an idea. Hawke rushes over but finds Darius' hitmen have got there first. They have killed Aaron and have found what they were looking for: a tape from Lila to Sally Anne. On the tape, she tells Sally Anne that Darius had been skimming money from the casino. She had been blackmailing him when she found out. Sally Anne was to take the tape to Dominic if anything happened to Lila. The tape would prove the identity of her killer.

The two hitmen spot Hawke arriving and pursue him. They capture him and take him out to sea in a boat and throw him overboard. The next morning, Babbitt finds Hawke barely conscious on the beach. Hawke tells Babbitt what he has learned but Babbitt is tells Hawke to go home. He says he is a good cop, mostly, but Darius has all the power. Hawke tells Babbitt to do what he can and he will help him. "If you're afraid of Darius, you're dead already."

Emboldened by Hawke, Babbitt goes to arrest Darius for the murder of Lila. Darius mocks him, telling him the badge he wears is not worth anything. He orders his hitmen to beat Babbitt up and throw him out of the casino. But Hawke does help as promised and Airwolf turns up outside the casino with its loudspeaker announcing that Darius is wanted for murder and ordering everyone else to clear out. Darius yells at his hitmen to shoot down Airwolf but their shotguns and pistols are prove useless and only provokes Hawke to reply with his machine guns. Darius's men escape from the building to be arrested by the police waiting outside. Last to come out is Darius. He spots Babbitt, points at Airwolf and shouts at him to "do something!" Babbitt is only too happy to comply and slaps handcuffs on him. Babbitt now tells Hawke the building is clear and Hawke launches salvo after salvo of rockets, demolishing the casino while the people gathered outside cheer. 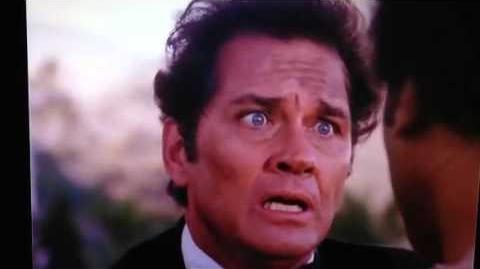 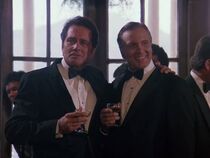 Brett Halsey as casino owner Jason Darius (left). Next to him is Michael Keep as "Solly". He is addressed as congressman but it is not clear if Solly is his firstname or lastname. 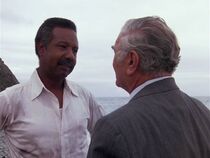 Jason Bernard as Aaron Martin, Dominic's friend from his youth. 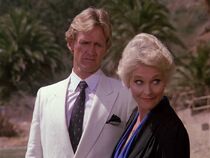 Lila Santini (Diane McBain) with Vince Decter (Bobb Hokins). He is the tennis pro who goes after older women, especially those with money. 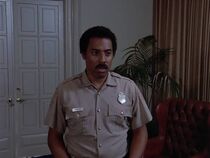 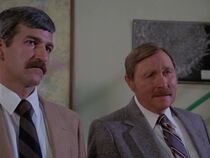 Wayne Heffley (right) as police Lieutenant Grodin in his second appearance. Here he is at Santini Air arresting Dominic. 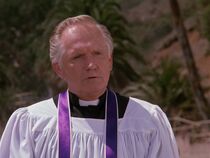 Sid Conrad as Father Donovan. Surprisingly he has many lines, with much screen time devoted to the sermon he makes during the funeral. 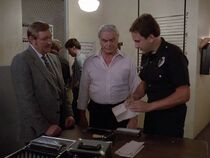 By contrast, this police photographer (played by Michael Bond) here with Dominc and Grodin has hardly any lines. It is difficult even to find a frontal image of him in the episode. 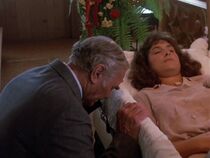 Dominic with his dead daughter. The actress playing Sally Ann Santini is not credited. 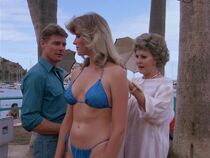 Lola Albright as Beatrice Moretti, a fashion designer and Lila's best friend, seen here adjusting her "Fall line" of swim suits. There is a credit for a Kathy Shower "model". This model in the blue bikini only has one line, "Thanks Bea," though.... 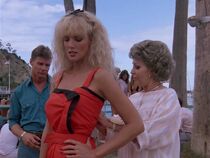 This model in orange has many more lines so she is more likely to be the character credited to Kathy Shower. She is constantly grimacing in pain as Beatrice tightens and takes in the swimsuit. In the end she asks, "What's wrong with you, Bea?" 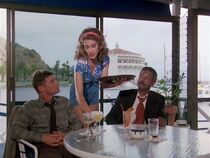 Dani Douthette as the waitress. She tells Hawke and Aaron how much she dislikes the casino whose renovation has resulted in her losing her home. The unpopular casino can be seen in the background. 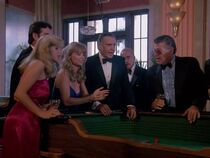 Suzanne La Rusch as Solly's girl. She is the one in blue next to Solly. 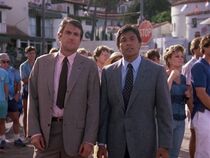 IMDb lists David Cadiente as playing an uncredited Darius "heavy". He is seen here on the right and has quite a few lines. The one on the left is not credited either. 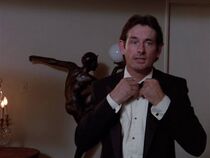 Another Darius thug. He gets a line or two, in this case, taunting Babbit to arrest him because his tie is not straight. But this actor doesn't get credited.