Hawke learns a Vietnam war buddy of his has been gunned down in the Texas desert by a corrupt Sheriff (Lance LeGault) after the man supposedly escaped from jail. Hawke and Santini fly Airwolf there to investigate the incident and find the conditions of the killing are suspicious. There, Hawke meets and takes interest in a female highway patrol deputy named Caitlin O'Shannessy, who is quite aware of the Sheriff's strange dealings and corruption. After being caught snooping around, the Sheriff has Hawke arrested and taken to a game reserve where ruthless sportsmen pay big money to hunt down people and Hawke is being used as prey. [1] 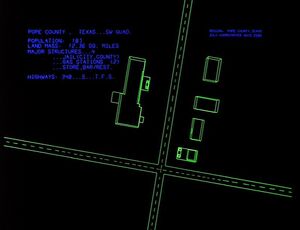 Airwolf computer readout of Pope County. The County Jail is on the left. It shares the building with a Greyhound station, a cafe and a gas station. There's another gas station, Texaco by the crossroads. Two buildings up from Texaco is the Rack Bar and Restaurant. 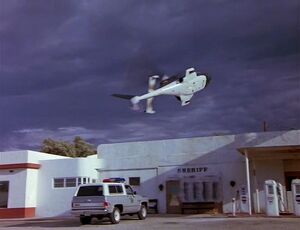 County jail, with a gas station to the right. 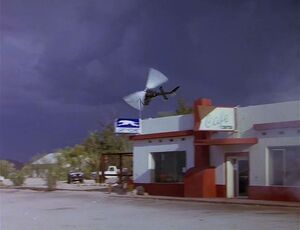 To the left of the County jail. There's a Greyhound station and a sign which says "Cafe". 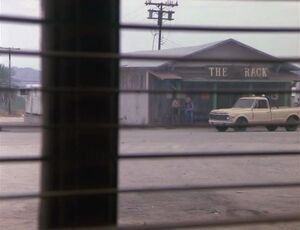 Across the street from the County jail--the bar named "The Rack". 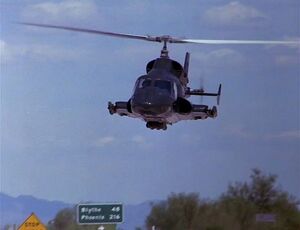 Airwolf comes in low towards the County jail. The road sign says Blythe 46 or 48, Phoenix 216. This should help identify the filming location. Somewhere on Interstate 10 in California.
Add a photo to this gallery 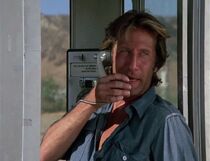 Joe Horvath as Harry. He calls Hawke to tell him Jimmy Blake is in trouble. Both he and Blake broke out of Pope County Jail and are on the run. 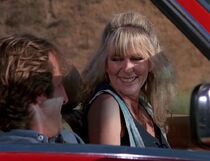 Harry manages to hitch a ride with "a blonde in a Mercedes". She is uncredited and doesn't have a speaking part. 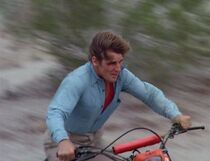 Jimmy Blake, Hawke's friend, chooses to escape in a bike. The actor is not credited. 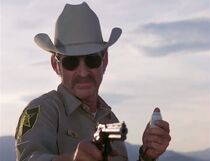 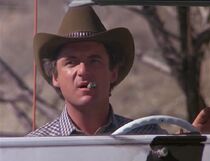 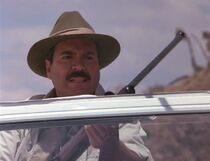 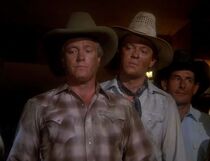 Guich Koock as Buck (left, nearest camera) and David Graf as Billie, next to him. Two of the Sheriff's "toughs". 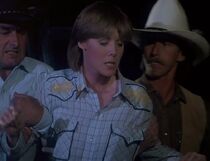 These two other toughs with Buck do not have speaking parts and are uncredited. 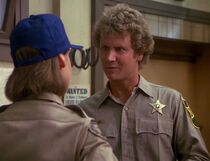 Robert Pierce as Bobby, the Sheriff's deputy.
Add a photo to this gallery

Retrieved from "https://airwolf.fandom.com/wiki/Sweet_Britches_(episode)?oldid=7674"
Community content is available under CC-BY-SA unless otherwise noted.