Died in nuclear explosion over his missile base

Tanya is a character who makes a one-time appearance in the Season 2 episode titled "Firestorm".

Tanya's position is not clear but she is often seen by the side of General Elliot Sandower so it is likely that she is the deputy or at least one of the senior leaders of the extremist militia.

She was in Angie's bar when she heard Eddie Donahough ranting about seeing UFOs (actually Sandower's helicopter flying at night). She also witnessed Hawke and Dominic being called in to help get Eddie off the premises and back to his trailer home. It is not clear if she was just in the bar on R&R or this was one of her duties: to keep her ear to the ground just in case security is breached and the locals start noticing something about Sandower's secret missile base.

She must have reported the events of the bar to Sandower as Eddie is soon attacked with rockets, and when that failed to silence him, abducted, along with Dominic. Hawke follows in the trail of his friends and scouts the base, and also ends up being taken prisoner. Thanks to Tanya's acting as Sandower's eyes and ears, the General already knows about Hawke when he interrogates him. Tanya appears to have some medical training as she administers some truth drug into Hawke during his interrogation. When Sandower wants the dosage increased, she tells him more could kill Hawke but she is overruled.

Later, when Hawke, Dominic and Eddie escape from the missile base, Sandower calls for the launch sequence to be initiated. Tanya at first objects because the plan was for the press to be informed first. But Sandower overrules her again, as he knew time was running out. The missile is launched successfully but Hawke returns in Airwolf and shoots it down, causing a nuclear detonation which incinerates Sandower, Tanya and all the rest of the miilitia. 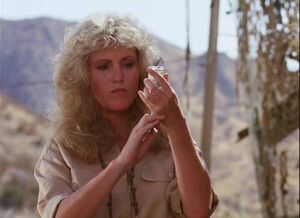 Tanya prepares to inject a truth drug into Hawke.

Tanya is played by Elizabeth Stack[1]