Tess Dixon is a character who makes a one-time appearance in the Season 3 episode titled "Day of Jeopardy".

Tess Dixon is the wife of Cullen Dixon, reputedly one of the richest men in America. During the episode, Cullen was the leader of a secret conspiracy to assassinate world leaders and take control of world currency. Tess escaped from Cullen's yacht and the FIRM assigned Hawke and Dominic to transport her in Airwolf to a Senate committee hearing where she was to testify against the conspiracy.

Some 6 years before the events in the episode, Tess had been Tess Rogers. She had a relationship with Hawke and became pregnant with his baby. Hawke wanted to have the baby very much but Tess felt that they were too young. She dreamed of Hollywood and wanted to be like Grace Kelly so she later married Cullen Dixon. Only, she found that instead of becoming a princess, at the hands of the possessive Cullen, she became a virtual prisoner on board his yacht.

Even so, she managed to have an affair with a visiting Arab prince and became pregnant with his baby. She would tell Hawke during their journey that this was her last chance. Doctors had told her that her termination of Hawke's baby earlier had left her unlikely to have another one.

Tess' strained relationship with Hawke made the atmosphere on board Airwolf tense during the early part of the journey. She at first refused to ever put on headphones and talk. She was distrustful and felt everyone was out to kill her. Only later, after surviving several attempts at shooting down Airwolf did she learn to trust Hawke and Dominic. She promised the two that she would name her baby Stringfellow if a boy and Dominique if a girl. 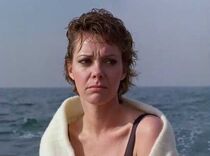 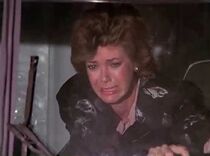 Tess proves she is no slouch. While escaping on a truck, she takes over the wheel after the truck driver has been shot dead. 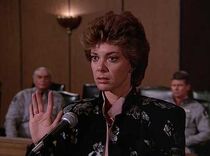 Tess testifying before the Senate committee. She is nervous and undecided about swearing to tell the truth because Barkley Kase is on the committee just a few yards in front of her.