Hawke, Dominic and Caitlin come to the aid of a group of Vietnamese immigrant farmers in California who are being terrorized by a former Vietnamese warlord who demands that they pay him tribute.[1] 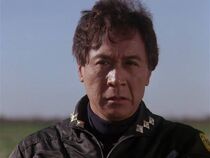 Tranh Van Zung seen here still wearing the three silver "blossoms" of a Vietnamese colonel although in the VNAF it was more usual to have the three blossoms in a triangular pattern, 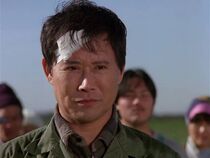 Nguyen Van Minh, a former war hero who swore off violence. Here he has regained his confidence and confronts Zung. 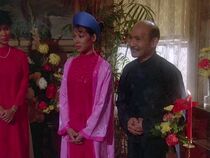 John Fujioka as Tru with daughter Mai (played by Marilyn Tokuda) at her wedding ceremony. 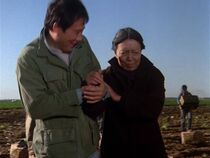 Beulah Quo as the feisty but unnamed mother-in-law of Minh. Here she is hustling him off the fields to get dressed for his wedding. 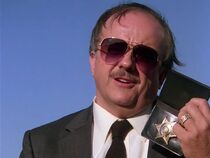 F. William Parker as Police Sergeant Bryant. He wants to do a good job but is surprised no one wants to press charges. Hawke, Dominic and Caitlin decide to help him gather evidence. 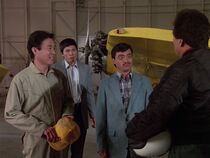 Some of Zung's hitmen/pilots. With the yellow cap is Ko (Sab Shimono) who murdered Diem. Next to Zung is Hua (Byron Chung). The one at the back is uncredited. 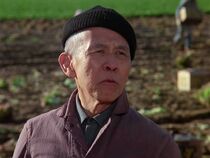 Diem, with Tru, owner of one of the two largest farms in the area. He refuses to pay tribute to Zung. 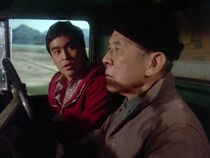 Tommy (in red jacket) with his father Diem. They are under attack on their way to delivering produce to market. 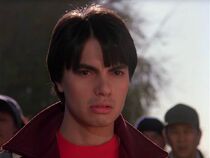 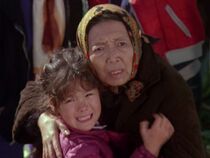 This is most likely Lindsay Price (later of Beverley Hills 90210). She is billed as "child". She is about the right age and is the only child with a line. IMDB lists her as "fightened child". Here she is looking frightened and telling her grandmother that the "Spider" is coming for them. 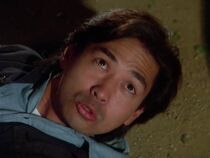 IMDB lists a Jeff Imada as an uncredited biker. This is the only one with his face exposed after he fell and Sama tore his mask off.