A lot of action for the entire F.I.R.M. crew again. Archangel actually gets to fly as WSO for Airwolf and he gets a new aide by the name of Francesca.

The families of Hawke's Vietnam war buddies are kidnapped and then Dominic and Caitlin too. Archangel and Hawke try to piece together connection and then they discover it has to do with a village which his squadron destroyed due to an intelligence mistake. Hawke gets some help from a Vietnamese woman named Lia but then he discovers that she came from the village also. [1]

Hawke, Dominic and Caitlin are having lunch at a cafe when they see a waitress Lia being harassed by Art Bonart. Hawke comes over to help her and he and the bartender throw the man out.

The scene shifts to the home of Jimmy Oshiro, one of Hawke's Vietnam buddies. A group of masked men bust in with Uzis and kidnap Mrs Oshiro and all the children.

Archangel arrives at Santini Air with news for Hawke. It's not just the Oshiro family. The families of two other of Hawke's Vietnam squadron mates, Ralph Kovac and Brad Miller have also been kidnapped. Archangel asks Hawke to think what the link is but he has no idea. But Archangel says Hawke and the other three are very close--they still keep in touch and get together once in a while. If Hawke had a family, they would be next in the kidnappers' list. So Hawke should think hard to see what the connection is.

Hawke gets a call from Lia who says she still feels threatened by Art so he goes over to her place. There, Lia tells Hawke how Art had known her in Vietnam and had tracked her down in America and doesn't leave her alone. Hawke calls Santini Air and asks Caitlin if Lia could stay with Caitlin for a while but while he is on the phone, he hears something startling: a bunch of gunman come into Santini Air, shoot up the place and drag Dominic and Caitlin away! Dominic and Caitlin are brought to some fenced compound done up like a prison camp. They meet the Oshiro family who tell them the Miller and Kovacs are there also. They have all been told that if they stay out of trouble and they should all be released in three days time.

Archangel thinks the attacks are retaliatory--for something that happened in Vietnam. He gathers Hawke and the other three men. They watch a videotape sent by the kidnappers of the hostages. But Hawke and his buddies have no idea why their families had been kidnapped.

At Hawke's cabin, Hawke keeps watching the videotape of the hostages. Lia seems, strangely, very moved by the tape also and tells him she thinks she should leave as Hawke has enough troubles on his mind.

Dominic, of course, doesn't accept this business of staying quiet for three days, so he makes an attempt to escape by prising out a floorboard. But he gets caught by Art Bonart and beaten up.

The man behind the kidnappings is a wealthy Vietnamese businessman named Tran. He praises deputy Dao for a successful operation and tells him they will soon be able to have their revenge. We now see that Lia is also part of the conspiracy, and she is Trans lover. But Lia doesn't seem as enthusiastic about the prospect of vengeance as Tran. She tells him she has seen the tape of the hostages, especially the image of Kelly, Oshiro's daughter. She had the same eyes of fear Lia once had in Vietnam. Tran is puzzled about Lia's reluctance. He makes Lia call Hawke to tell him she knows someone who has some information to give Hawke about the kidnappings and wants to meet.

Hawke accepts the offer but Lia takes him to a dark alleyway where Dao and some other men attack him. Hawke beats them off and asks Lia what is going on. He is getting the impression that this has all been a set up. But Tran has been watching in the shadows. He now confronts Hawke and wants him to think about the past, about a place called village 108.

Hawke remembers village 108. It was a search and destroy mission. Hawke was rostered for the mission with Oshiro, Miller and Kovac but Hawke didn't go because he stayed back to question a prisoner about Saint John. From the F.I.R.M. computers, he learns that the strike was based on an intelligence error--there were few enemies there, and many innocent civilians were killed. Lia, Tran and Dao were listed among the survivors of the attack.

Archangel and Hawke go to Tran's office for some answers. They come across the body of Lia--she has been killed by Tran for trying to speak up for Hawke's innocence. Inside Tran's room, they see charts and maps. Hawke thinks he knows what is happening, The next morning would be the 10th anniversary of the strike on village 108. Tran plans to reenact the attack, on the families of the original pilots! Time to get Airwolf!

Next morning, Dominic wakes up and finds the prison camp deserted. He wakes everybody up and gets them outside. Airwolf arrives on scene but so do two Hueys which start shooting up the camp. There isn't much time. Caitlin hotwires a van and they get all the families on board and crash the van through the gate. Hawke goes after the first Huey, piloted by Art Bonart and shoots it down. The second Huey, flown by Tran and Dao has been pursuing the van. Hawke blows it up but not before the Huey has managed to overturn the van with a near miss from a rocket.

Over at a celebratory lunch with the families, Dominic explains what happened. When the van disappeared from view under a big tree, Caitlin had suggested that all the passengers get off. Dominic then drove the van off as a decoy, giving Hawke the time to catch up and shoot down Tran's and Dao's Huey. 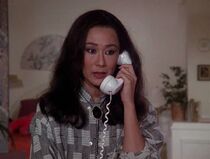 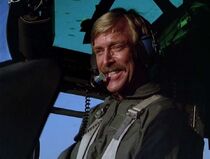 Joe La Due as Art Bonart. He harasses Lia so that Hawke comes to her defense but this turns out to be a setup to lure him away from Santini Air. 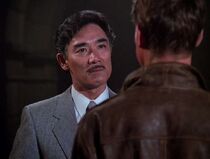 Robert Ito as Tran van Hieu, a wealthy Vietnamese businessman who is set on revenge. 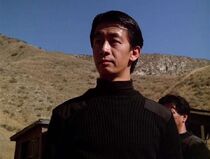 George Kee Cheung as Dao Van Lat, Tran's key hachetman. He organises and leads the kidnappings of the families. 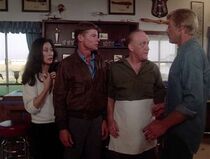 Ed McCready as the bartender. Here he is telling Art Bonart to lay off harassing Lia otherwise Hawke will take him down. 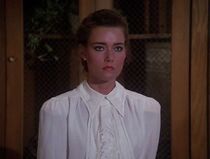 Archangel gets a new aide named Francesca in the credits. She is not addressed by name in the episode. 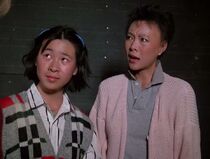 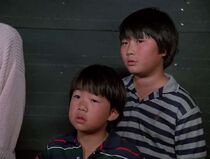 Courtney Chu as Billy (left) and *Kyle Nakamura as Brennan (right), another two of the Oshiro family. 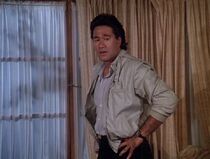 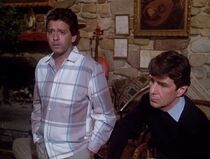 John Kirby as Ralph Kovac (right). On the right is Frank Pesce. The credits list his character as "Ray" but really he is playing as Brad Miller. Oshiro, Kovac and Miller are three of Hawke's buddies and all their families had been kidnapped. 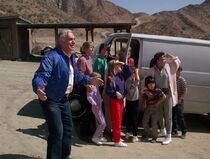 A view of the hostages. They have just spotted Airwolf coming in to the rescue. The blond woman next to Dominic is Mrs Kovac and is uncredited as are the two girls playing the Kovac daughters in front of her. The brunette next to her in green is Mrs Miller and the boy in the grey shirt in front is her son. Both are uncredited. 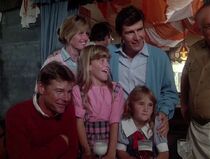 A good view of the Kovac family--all except Ralph are uncredited. Unfortunately there is no better view of the Miller family than in the previous picture. 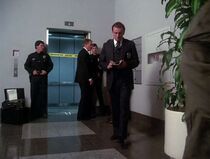 Bob Jarvis is credited as "Detective". What detective? Here are some detectives just after Hawke and Archangel discover Lia's body. Could be the man on the right. Nobody here has any speaking part. 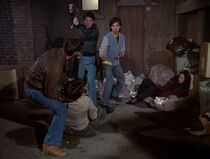 IMDB lists a Jeff Imada in an uncredited role as one of Tran's men. Here he is in grey and yellow next to Dao, fighting Hawke. He is also present at the prison camp where the hostages are held. 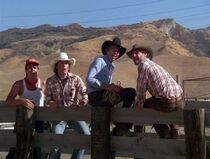 These cowboys exclaim in surprise at seeing Airwolf but all are not credited.