The Horn of Plenty

From here on, Marella does not appear in any further Airwolf episodes.

Villianous tycoon John Bradford, master of disguise, Horn uses his daughter to lure Hawke into a trap where he is taken prisoner by his private army and then brainwashed. Hawke sends Dominic a message to deliver Airwolf or else he will be killed. However Dominic has a trick up his sleeve. He and Hawke have secretly trained Caitlin to fly Airwolf. Caitlin hides inside Airwolf while Dominic delivers it to exchange for Hawke. But then something goes wrong: Hawke shoots Dominic.[1]

John Bradford Horn, a Villainous tycoon. master of disguise and fugitive from U.S. law has spent his time in hiding building up a secret army. He has also gathered a team of scientists and doctors to conduct experiments on mind control techniques. When all is ready, he sets his sights on getting hold of Airwolf.

Disguised as jeweler G. Van Dorien, Horn hires Hawke to fly his daughter Angelica Bolliton, posing as a jewelry sales representative to meet an important client in Scottsdale. In reality, Angelica is the bait. She romances Hawke, gets his guard down and persuades him to fly to a place in Texas because that's where the busy client has gone to.

Upon landing, Hawke is seized and brainwashed to think that he owes his life and allegiance to Horn. Hawke next sends a video to Dominic asking him to deliver Airwolf to Horn or else he will be killed.

Dominic prepares to depart for the mission but Caitlin insists on going along: "I care about him too you know ... probably more than you know." They have a trump card: Hawke and Dominic have been secretly training Caitlin to fly Airwolf. Caitlin figures Horn doesn't know they have a third person on the team. Archangel didn't know either and is exasperated to find out, but he agrees to let them go. He gives them an experimental serum which should block any mind control drugs Horn has been using.

At Horn's base Dominic steps out of Airwolf to greet Hawke who seems to be waiting, surrounded by Horn's guards. But then the unexpected happens: Hawke draws a gun and shoots Dominic!

It's all up to Caitlin now. She hides in the missile compartment until nightfall and then overpowers a guard and dons his uniform. She spots Horn and his men entering a bunker and follows. Inside, she discovers that Dominic is still alive. He has only been knocked out by tranquilizer pellets in Hawkes's gun. Next, she tails Angelica who goes to see Hawke in his room.

After Angelica leaves, Caitlin enters and calls to him. At first he doesn't seem to recognise her and starts to fight but she manages to jab him with the serum. Hawke goes into convulsions and then appears to die, but he comes to about a short while. At first he is distressed to think that he shot Dominic, but Caitlin assures him that Dominic is still alive: Hawke only tranquilized him. Hawke works out a plan to escape.

As the morning approaches, Horn sends Hawke off on an Airwolf mission. It turns out Horn has negotiated with a Caribbean government to buy over the island of Mauro, intending to set up his on independent state. But there is a left-wing rebel base there and Horn wants Airwolf to take it out. Hawke appears to agree and takes off but once out of sight, arms his weapons and returns to shoot up Horn's base.

Meanwhile Caitlin is inside the bunker. In the chaos of the base under attack, she makes her way to Dominic's cell and frees him. They get outside and are picked up by Hawke who then goes after Horn and Angelica escaping by a car.

The car stops and Hawke lands. He tells the rest that Horn is his, but Caitlin wants dibs on the daughter. They force the car doors open and out falls one of Horn's aides, but Horn and Angelica have disappeared! Hawke tells the others that Horn will show up again and when he does, he will get him. Caitlin reminds him that Angelica is hers.

There is a side plot element about Angelica falling for Hawke for real and being upset that her father is endangering Hawke by sending him for the mission. But this plot line is not developed. She does not, for example, help Hawke to escape, as one might have expected.

There is quite a lot of doubt about who plays which part. Horn and Angelica are known for certain. Tentative identifications have been made for T. J. and Harry but where is pilot #1? 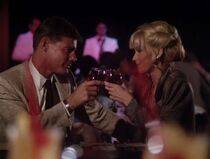 Catherine Hickland as Angelica Bolliton. She is the bait to lure Hawke into the trap. 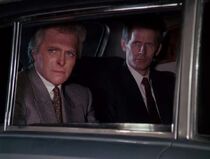 Richard Lynch as John Bradforn Horn on the left, master of disguise and master of crime. Next to him is an aide who has many lines. He gives Hawke his mission briefing. He might be T. J.. 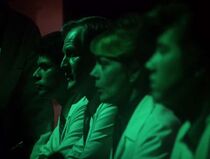 Various Horn doctors running a mind control routine. The one in focus (2nd from left) is Dr. Gastner. Next to the right is Dr. Fairling. There is a better shot of her in her character page. 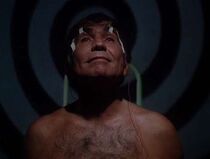 This could be Guy Remsen playing "Harry", one of Horn's mind control subjects. However Horn addresses him as Donald. 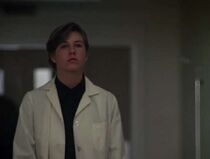 This is most likey Liddy Roley as the Lab Technician. She is the only other "white coat" type with a speaking part. 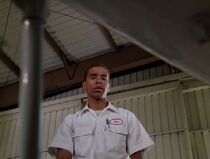 series.airwolf.tx lists a messenger played by Marshall Maurice Mitchell. This is him. 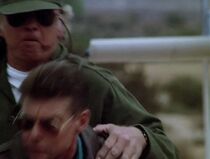 IMDB lists Tony Epper as a soldier at Horn's base. Here he is, slightly blurred, subduing Hawke.
Add a photo to this gallery

Retrieved from "https://airwolf.fandom.com/wiki/The_Horn_of_Plenty_(episode)?oldid=7545"
Community content is available under CC-BY-SA unless otherwise noted.