At this point, Caitlin starts flying important missions but not in Airwolf and Hawke and Dominic but they still deny that some "big black helicopter" exists.

A rich corporate industrialist, Carter Anderson III, who is aware of Airwolf, hires Dominic and Hawke to fly him to an important meeting when he suspects he might be targeted for a hit. Anderson is aware of the existence of Airwolf. Caitlin is assigned to fly Anderson while Hawke and Dominic fly high cover. But Caitlin's new boyfriend might just be in on the assassination plot.[1]

Caitlin is busy preparing for a date when a large convoy of cars pulls up at Santini Air. It's Rosalind Gregory, the aide to billionaire industrialist Carter Anderson III, and she wants to hire the exclusive services of Santini Air for 30 days. Dominic is delighted--because they get paid for just waiting. But Hawke is not pleased because he doesn't know what's going on. He feels bought "like a couple of hunks of meat in a freezer."

There is something sinister going on: some hitman (Robert Villers) is keeping Santini Air under surveillance, snapping photos of everyone and bugging their conversations. Villers is as ruthless as they come. He romances Edna Mosconi, who runs a photo business, in order to use her darkroom. He also engages a metalworker named Coogan to make some metal tubes for him. Villers, having got what he needs, kills both to remove the evidence.

Meanwhile Caitlin is angling for a part in the Carter Anderson contract--she calls Hawke five times. Hawke promises to put in a word for her, but she has a catch: she has a date and can't start until Monday.

Returning from a test flight with Airwolf, Hawke and Dominic find Rosalind's men doing a security sweep of their hangar. Hawke is upset and storms off to Carter Anderson's fortress like residence. Rosalind tries to stall him at the gate but Anderson decides to see him. Anderson tells Hawke he has invested heavily to revive many American corporations, making them competitive and put 50,000 workers back to work. He needs safe transport to a meeting to sign a big deal with government, labor and local business. However some people who oppose it. There have been three attempts on his life already. Hawke asks, "Why us?" Anderson replies, "Or why Airwolf ... or Archangel?" He has friends in high places too. He is well protected on the ground but is vulnerable in the air, that's why he needs Airwolf. Hawke says it must be done with a plan only he knows about. He will decide "when, where and if, and any special equipment that's to be used." Rosalind thinks this is ridiculous but Anderson likes it and accepts.

Hawke is worried that the whole Anderson deal might be a ploy to steal Airwolf. So during a reconn flight, while Caitlin can't stop talking about her weekend date, Hawke comes up with his plan: Caitlin will fly Anderson in a Beechcraft King Air. He and Dominic will provide backup.

A few days before the flight, Hawke discusses the plan with Rosalind, her assistant, Tony Spandel, and Dominic at a bar. Then Hawke asks Rosalind if she feels like dancing. She hasn't danced for years, neither has Hawke, so Dominic encourages them. They catch sight of Caitlin dancing with her new boyfriend, and it turns out to be Robert Villers! She indiscreetly tells him she has to take off on Wednesday at two o'clock but will be back by the end of the week.

The big day arrives and they execute Hawke's plan. Three helicopters all carrying people who look like Carter Anderson take off from his residence, like in an aerial shell game. They make their way to an airstrip where Caitlin takes the controls of a Beechcraft King Air. Moments before take off, we see Carter Anderson stepping out of a fuel truck dressed in workman's overalls. Decoy within a decoy and it has worked so far.

But we see Robert Villers loading missiles into tubes fitted on to a Corsair, and preparing for take off at two, just as Caitlin has revealed. There is trouble ahead. Dominic and Hawke lift off to provide cover--if they make it in time.

In the air, the Corsair closes in on the King Air and Caitlin sends out a "mayday" to Hawke. The Corsair fires a missile at the King Air but Caitlin successfully evades it. "Once is lucky," she tells Rosalind. Fortunately, Airwolf intervenes and in a long dogfight sequence, shoots the Corsair out of the sky. Just before the plane explodes, Villers calls Caitlin to say goodbye and tells Dominic and Hawke, "It was a good show, fellas."

The mission is over. Dominic and Hawke take Caitlin to the cabin for some downtime. She is distraught about being deceived and endangering the mission. She's "through with people, with life, with everything." That is, until the conversation gets around to Hawke rescuing her. Hawke says it wasn't him. This gets her going again. "You mean you are just going to sit there and tell me ... that I didn't see ... that there's no big black helicopter?" "I think she's feeling better!" says Hawke. 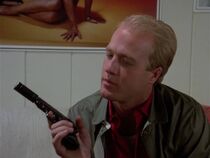 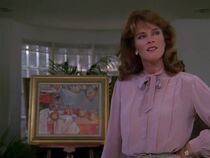 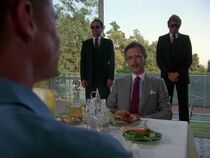 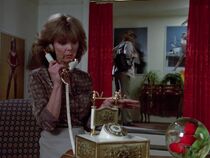 Edna Mosconi, seen here in her photo studio. Villers romances her to gain access to her facilities and equipment. At one point she mentions that Villers is her employee and that she is considering selling her business to him. 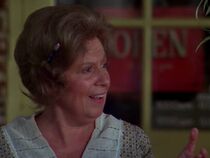 Market owner as played by Penny Santon. She is happy to hear of Caitlin's new job and offers to give advice on "catching her new boy". Caitlin eats a melon from her and this scene forms part of the opening sequence for Season 2. 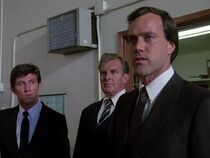 Tony Spandel, Rosalind Gregory's assistant seen here on the right. He and his security men have been doing a security sweep of Santini Air but Hawke and Dominic don't like it. 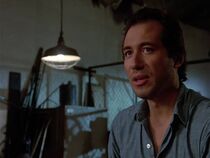 Coogan, a metal worker who fabricates some tubes for Villers. He proves just a little bit too curious for the hitman's taste. 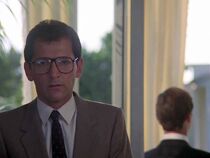 Just which character is the "Man" played by Guy Sartee? This man has a brief speaking part as some member of Anderson's staff. Is this Sartee?
Airwolf F4U Corsair2.png
Fighter plane from this episode