likely punished for his failure

Vladimir Kinskov is an East German intelligence agent who made a one-time appearance in the Season 2 episode titled "Fallen Angel".

Vladimir Kinskov is a KGB intelligence agent who works with the East Germans Dr Karl Kruger and Maria von Furster to lure Archangel into East Germany to capture and brainwash him. A crude and ruthless man, Kinskov had none of the suaveness of his colleague Kruger. He impatiently hurries Kruger and wants Kruger to use higher doses of the truth serum regardless of the risks. Later, after the plan appears to have succeeded, he notices that Maria appears wistful and taunts her. Was she allowing her emotions for Archangel to interfere with her professional duties?

Hawke saw through their plan and towards the end of the episode, Hawke and Archangel are back in Airwolf, this time to seize Kruger's truth serum. Kruger and Maria are shot. Kinskov appears to have survived Airwolf's raid, but obviously he would have to face punishment since he has failed badly. The plan to use Archangel to assassinate the FIRM committee did not work and what was more, they had lost the truth serum. 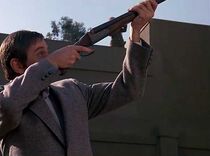 Kinskov doing some trap shooting with his Beretta shotgun. They are celebrating the apparent success of their plan. A little too early, perhaps.