Where Have All The Children Gone? (episode)

Where Have All The Children Gone

There is a lot of action for everyone including Archangel but he shows up without an aide (unless you count Caitlin, who is his pilot here).

Hawke has to deliver the Medal of Honor of his friend, John Fargo, to his brother, Billy Fargo, a draft dodger who went to Canada and now lives in the remote fishing village of Beaudy. Hawke has a strange feeling about the place. It is populated only by children, all living a 1960s "flower children" lifestyle and no one seems to want to answer any questions about Billy Fargo. Hawke later discovers Billy Fargo is very much in the village--all the children call him "Father"! And the whole set up is an elaborate scheme to destroy the world. [1]

After the funeral of his friend John Fargo, Hawke has to deliver his Medal of Honor to his next of kin, Billy Fargo who was once a draft dodger who had escaped to Canada. Hawke arrives at the village of Beaudy but immediately has a strange feeling about it. The place seems to be full of 1960s style "flower children" complete with peace symbols and anti-war slogans. There doesn't seem to be any grownups around. The teens there deny knowing Billy Fargo--even the two youthful deputies and a post office worker say there is no Billy Fargo there--he had moved east. Hawke goes to Fargo's address. He meets a girl whom he is sure is Wendy Fargo, the neice of Billy and John but she insists her name is "Cotton". Hawke calls Dominic and tells him his suspicions.

Things get more sinister when Billy Fargo and Sabrina Cooke arrive in Beaudy in colorfully painted VW van. It seems Billy is the leader of the flower children community. They all call him "father" and there is a scene later of him leading the youths in a singalong full of speeches about peace and love. The deputies tell Billy about Hawke, and he looks worried. He tells them Hawke is a warrior, a threat to peace, a dangerous man. If he comes back, he must die a warrior's death.

Dominic and Caitlin tell Hawke that F.I.R.M. information shows Billy is definitely still in Beaudy so Hawke goes to see Wendy/Cotton again. He tells her he knows she is not telling the truth and asks her what is going on. She says she cannot tell him, so he leaves, saying that he has to report this to the authorities and there will be trouble. Billy overhears this and sends his deputies to arrest Hawke.

The plot thickens. We see Sabrina training a bunch of kids in martial arts and then accessing a computer about "Project Slingshot". She wants to know whether Hawke will be a threat to their scheme but Billy assures he will take care of it.

For his jail cell, Hawke sees the children board a school bus. He tells Billy he knows he is using the children for something. Billy tells him they will get for him a source of power which will force the "enemies of peace" to listen to him. But it is not just about "peace". Billy reveals that he stands to get a lot of money out of it. Hawke calls him a phoney. This angers Billy and he lunges at Hawke, which allows Hawke to get his arm around his neck from behind the cell bars. The deputy is forced to release Hawke and he makes his escape in his car.

The Beaudy deputies pursue him but help is at hand. Dominic has been worried that Hawke is overdue and has gone to fetch Airwolf. He forces the deputies' police car off the road and picks up Hawke. He calls Archangel--he thinks Billy has some plan to blow up the world. Archangel is enroute in Angel One with Caitlin and they rendezvous at Beaudy which seems deserted.

The school bus turns out to be a school trip. Sabrina Cooke is leading the kids on a visit to Aerosearch International where they are greeted by Dr. Francis Watkins. He welcomes them and tells them that Sabrina was a computer expert who not long ago developed the data programming software for the corporation. He leads them on a tour of the control room where they launch and monitor space vehicles and tells them they are about to witness an important event--Project Slingshot, a drone F-4 Phantom which is going to test launch a missile called "Spaceguard", an anti satellite weapon with eight separate nuclear warheads.

Now the purpose of the martial arts training is revealed. At a command from Sabrina, the kids attack the security guards and take over the control room. Sabrina takes over the command console and transfers launch control to Billy Fargo in his bunker under city hall in Beaudy. Fargo commands the F-4 drone to take off and then demands $20 million as a ransom or he will launch the Spaceguard missile at Moscow.

Hawke hears the transmission between Fargo and Watkins and cuts in. He tries to reason with Billy but this fails. So Archangel orders Sullivan, in command of a F.I.R.M. strike team, to storm and take over Billy's bunker.

Billy launches the F-4 drone and when Watkins refuses to pay the ransom, he commands the drone to launch the Spaceguard missile. The teens with Sabrina are however surprised by this. The drone was supposed to be a bargaining chip and the missile wasn't supposed to be launched. Cotton tells Sabrina this is not the way to peace, and that Fargo had lied to them. Sabrina tells Cotton she doesn't care--they have served their purpose. Cotton replies that her name is Wendy. She refuses to use the name they gave her and refuses to listen to their lies. The kids surrender control of the room to the security guards but it is too late--the missile is on its way.

Hawke and Dominic lift off in Airwolf to pursue the missile. It first heads for the Kamchatka Peninsula but moments later, it makes a U-turn and heads for Washington D.C.!

The F.I.R.M. security men have taken over the bunker and Fargo is taken prisoner. But even he is not expecting the missile to change targets. He shouts at Sabrina to abort the missile. But Sabrina tells him she can't. In any case Americans destroying their own capital would make a bigger anti-nuclear statement.

Hawke now has no choice but to take Airwolf way beyond its limits to hunt down the missile--taking it as high and as fast as it can go. Despite this, the Spaceguard missile launches its warheads before Airwolf can catch up so now Hawke has eight targets to hit instead of one. He opts for Falcon missiles and manual targeting. One by one he shoots them down but the last one is elusive and he gets it only as it flies over the Washington monument.

The crisis is over, and the kids have come to their senses and are being returned to their guardians or parents. Wendy is taken care of by her aunt Priscilla Grant. They meet Hawke and thank him for his help.

There's supposed to be an actress named Dana Stein playing the character "Gail" but this name is not mentioned at all during the episode. Dana Stein had a film career largely in stunts so she might be one of those in the martial arts fight scenes but we can't be sure. 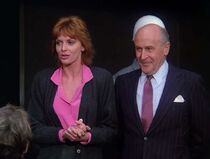 Deborah Wakeham as Sabrina Cooke, a computer genuis. With her is Ben Hammer as Dr. Francis Watkins of Aeroresearch International, whose missile control room is taken over by her children. 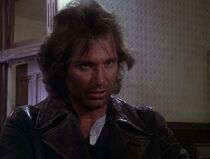 Lewis Van Bergen as Billy Fargo, former draft dodger who comes up with an elaborate scheme to bring peace or get rich--a matter of perspective. 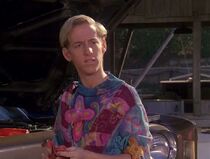 Tom Hodges as Hal. One of the first youngsters Hawke speaks to in Beaudy. A vehicle mechanic. 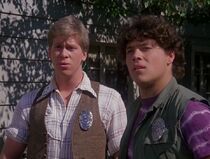 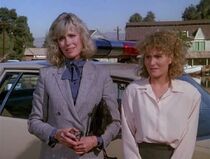 Hawke meets Wendy Fargo (right, played by Alicia Chambers), niece of his friend John Fargo. He recognises her but she insists her name is "Cotton". This is her towards the end of the episode, with her aunt Stella Grant (Pat Delaney). 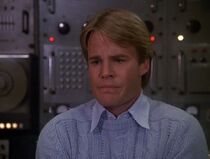 Jeb Adams plays Harvey. One of the youngsters who help Sabrina Cooke take over the missile control room. 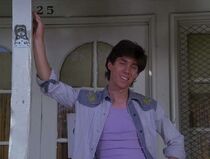 Curtiss Marlowe plays Randy, another of the youngsters at Beaudy. He works at the post office. 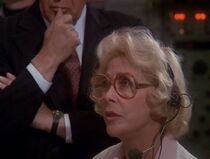 Dr. Watkins mentions that this person is Dr. Kaspersen but there is no credit for this name. There is one for "female technician" so this could be her. She is the only "technician" type in the control room with a speaking part. 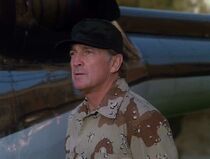